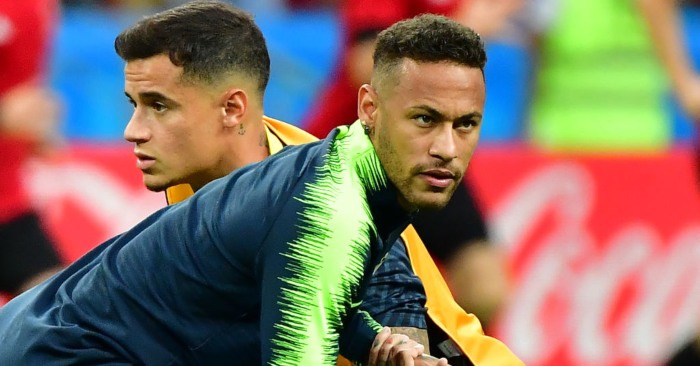 Neymar, Philippe Coutinho, Luis Suarez and Liverpool is where the clicks are at…

Guess who’s back…back again
There’s gold in them Coutinho to Liverpool hills and if there is one man who knows how to pan for such precious gold it is the Mirror‘s Jake Polden, who told us exactly a week ago that the ‘love affair’ between Liverpool and Coutinho is ‘dead and buried’. But now there is talk of the flame of love being lit again. It’s so hard to keep track.

As the Premier League went into stasis with Liverpool 25 points clear of second-placed Manchester City, it’s difficult to argue that Liverpool are “missing” anything at all. They’re kind of doing okay.

But of course nobody at all has said that Liverpool are “missing” Philippe Coutinho because that would be mental; what Owen Hargreaves has said is that “if Liverpool are missing one thing it is probably a No10ish player” but that – and this is kind of important – “they probably don’t need him because that front three are so good as is the balance in midfield”.

He is not so much ‘talking up’ a return as dismissing the notion. But why let that get in the way of a golden liverpool-missing-philippe-coutinho-return slug?

Red stretch
We’re not saying these are desperate times but…

Summary: Liverpool were destined to win the title from the minute that PSG spent £200m on Neymar three years ago.

Talking of Neymar and Liverpool…
‘The next Neymar could dance to Liverpool, and Anfield should be very excited’ – Liverpool.com.

A quick scan of the article confirms that Talles Magno is being hailed as ‘the next Neymar’ purely because he is from Brazil. Which means he might also be the next Afonso Alves.

But at least David Alexander Hughes is comparing a Brazilian with a Brazilian. Last month he described Argentine teenager Thiago Almada as ‘the next Luis Suarez’ despite Almada not being a) Uruguayan or b) a striker. So is he c) a biter?

Man from Auntie
‘Premier League games could be on free TV from mid-June to stop people going out’ is one of the top headlines on The Sun football page. Woo-hoo. Hurrah. Praise be.

Let’s all ignore the fact that The Sun’s actual back page tells us that ‘after discussions with the Government, just “two or three” of the remaining 92 games will be screened live on the BBC’.

So there might be 270 whole minutes this summer when the spread of coronavirus will be curtailed by Premier League football on the BBC. Who needs a vaccine?

Ligue 1 vs Doctor Who

Premier League vs Homes Under The Hammer (the Dion Dublin derby)

Louis van Galling
“I was devastated when Louis (Van Gaal) was sacked. For me, it was an absolute joy to work with him. We should have kept him for a third season. We would have been so much stronger.

“I felt things were improving and players started to understand his vision. In those two years I learned more than under any other manager,” said Wayne Rooney this weekend.

Having worked under Sir Alex Ferguson, David Moyes, Jose Mourinho, Sam Allardyce and, erm, Ben Olsen, that is quite the compliment from Rooney, who you might imagine would know a thing or two about managers and what works.

But not as much as the Daily Mail‘s Ian Ladyman, it seems. He has been paid twice this weekend to tell Rooney he is wrong in his opinion. Not misguided, but just plain wrong. First on Sunday Supplement and then in the Daily Mail.

In the latter, Ladyman tells a story:

‘Once, after a particularly miserable loss at Stoke on Boxing Day 2015, United assistant coach Ryan Giggs was having a drink with the opposition staff only to be told the team bus was leaving early. In the middle of a taxing holiday programme, Van Gaal was taking his players back up the M6 to Carrington to train. Giggs was stunned.’

What Ladyman does not mention: Manchester United then lost just one of their next nine games.

And if he believes that Van Gaal was a ‘categorical failure’ after a fourth-place finish and an FA Cup trophy, how on earth will be categorise the reign of Ole Gunnar Solskjaer? Or can we only judge him after he has made the £200m no-brainer signing of Harry Kane?

Three men in a boat
We are all struggling for ideas in these difficult times for football journalists. Give us a clap on Thursday, will you?

But The Sun‘s Jon Boon is a man who never struggles for ‘football features’.

‘Footballers’ yachts: Ronaldo, Pochettino, Alli and more have hired holiday boats, but which was the most expensive?’

It’s the question we are all asking this Monday morning.

Mediawatch is particularly amused by the fact that the feature has so far attracted just one comment:

‘Good for Fishing but I will stick to beach casting.’

Which pretty much exactly echoes our thoughts.

What’s in a name?
‘Marcus Rashford trains with former Man Utd teammate as other stars head to Carrington’ – Mirror.

No, that would be ‘former Man Utd teammate’ Ro-Shaun Williams, who never actually played for Man Utd.