Home F365 Says There’s a title to be won; do Liverpool need to change strategy? 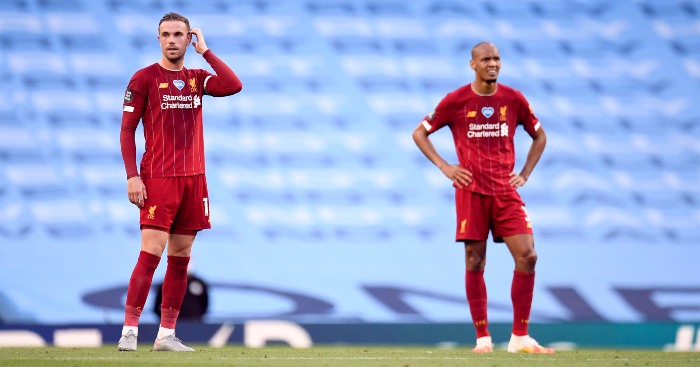 Liverpool have a very good and very clear long-term transfer strategy that a) is demonstrably better than anyone else’s in the Premier League and b) has delivered tremendous success in recent years.

We can all agree Liverpool are a very well-run club and an example we’d all like our own clubs to follow.

That being said, Liverpool should probably tear all that up right now and buy a centre-back this month, despite the inevitable January tax for a player who, six months down the line, will most likely be a reserve.

There is, quite simply, a Premier League title to win and Liverpool, despite being the best team in the country, are not currently on course to win it. Worse still for Liverpool fans, Manchester United might instead.

One of the key reasons for the success of Liverpool’s transfer approach is a cold, calculated, dispassionate analysis that quite rightly pays no heed to external tish and fipsy like Manchester United winning the league. But come on. Liverpool should win the league this season; letting Manchester United win it instead would be a double victory for silliness.

There are a couple of things at play with Liverpool’s current funk. First, they are providing yet further evidence that two seasons represents the absolute limit for a Premier League team to produce unstoppable winning football. It happened to Chelsea in Jose Mourinho’s first spell, Manchester City last season and Liverpool this.

No Premier League team has reached 90 points three seasons in a row, and that looks set to continue. The good news for Liverpool is that it need not matter. Nobody else is in a position to do to them what they were able to do to City. This season, 85 points might well be plenty. Liverpool should be making sure they get them.

The other issue is that although centre-back is the glaring hole in the squad, with Virgil van Dijk and Joe Gomez absent, it’s not actually proving to be the biggest problem on the pitch. The Villa weirdness happened with both men involved, while recent draws and defeats have owed more to a suddenly misfiring attack. It might be that the real miss for Liverpool is in fact Diogo Jota, who revitalised that attack to such devastating effect.

But Jota himself is evidence of how Liverpool can make a low-key, slightly opportunistic signing work. Nobody – not even Liverpool themselves truth be told – could have anticipated just how significant Jota would become in a short space of time.

Liverpool right now again look a team in need of… something. A fresh injection of something different. They don’t need to find the next Van Dijk, they just need to find something to get them through their third-season weariness and deliver a second title that represents the minimum requirement for what is one of the finest teams ever assembled in the Premier League.

And bringing in a new centre-back can help the attacking play. At the most basic level, it will help Liverpool start to move their midfielders back up the pitch into the actual midfield.

Most significantly, though, it’s simply the right thing to do even if you do want to retain your flint-eyed calculating reputation. If Liverpool were in this position but were still on a 30-year title drought, there is no doubt they would be rejuvenating the squad to make sure that drought ends. Winning one title cannot and should not change that.

They just need to make sure it’s the right fresh meat. And Liverpool are better at shopping than anyone else.