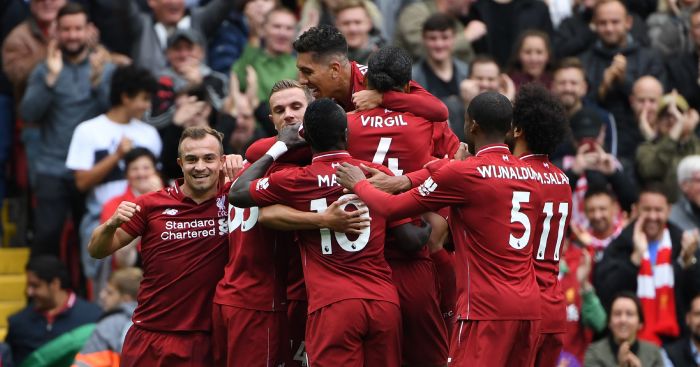 Liverpool: Record-breakers
Congratulations are owed to Liverpool as – according to Mark Lawrenson – they are about to go 83 games unbeaten in the Premier League. For the last time that the BBC pundit predicted a Liverpool defeat was on the final day of the 2015/16 season. Mediawatch cannot fathom why they are yet to win a damned thing.

This week Liverpool go to Chelsea on Saturday tea-time and – as is customary – Lawrenson has predicted a 1-1 draw. Of course he did. What else could it be?

Of the last six Premier League games Liverpool have played against fellow Big Six opposition, Lawrenson has predicted six 1-1 draws. Needless to say, not a single one of those games has actually ended 1-1.

The last time Lawro actually predicted a Liverpool win against fellow Big Six opposition? November 2017 when he believed that they would beat Chelsea 2-1.

And what was the final score that day? Do you really need us to tell you?

Which is why the Manchester Evening News are dredging up old Alex Ferguson quotes from 2012 and 2015 to suggest that they have a new Paul Pogba story in a week that has been dominated by Paul Pogba.

Little over an hour later and the Daily Mirror website are piggy-backing on that story with their own headline of ‘Paul Pogba: How Sir Alex Ferguson twice warned Manchester United about Frenchman – and his agent’.

Yes, he ‘warned Manchester United’ (and presumably everybody else) by publicly speaking about Pogba in 2012 and then by writing a book in 2015 in which he mentioned Mino Raiola.

Mixed messages
The thirst for new angles on the Paul Pogba story has led the Daily Telegraph to consult ‘Sports Marketing Expert’ Nigel Currie. He writes:

‘Paul Pogba’s performances for Manchester United may not have been mixed but that does not alter the fact that he is one of the biggest football brands out there.’

Shame he is not an expert on either the English language or football.

Probably made-up quote of the day
The Sun website are claiming an exclusive that ‘SPURS’ new online gambling partner is being probed over claims it illegally allowed UK punters to bet on cock-fighting’.

“I’m against animal cruelty and it’s unbelievable Spurs teamed up with a betting firm promoting cock-fighting as sport.

“The club has a cockerel on its badge.

Of all the clubs to be linked with an online gambling partner who may or may not have made it possible for UK punters – if they lie and claim they are not UK punters – to bet on cock-fighting, it had to be the club with a cockerel on its badge. What are the chances?

Or ‘Man sits on (pretty ugly) sofa with girlfriend’.

Admission of the day
The biggest story in football according to the Sky Sports website on Friday morning:

‘Eden Hazard admits it feels good to be compared to the world’s best players but insists he is more concerned with winning trophies.’

How the hell did they get out of him? Waterboarding? Thumb screws? The dullest questions known to man?

Probably
Obviously we went to Sky Sports for Paul Merson’s predictions, but we were pulled in by a headline that reads ‘Ramsey deal ‘affected’ by Ozil wages’. Well, well, that is a big story.

And then we are told that Andy Townsend – not, as far as we know, present at any of Aaron Ramsey’s contract talks – has speculated that Ramsey is “probably thinking” that he should earn a similar amount to Ozil.

So in short: A man thinks that another man probably thinks something.

Insight of the day
“Aaron’s never been blessed with great pace, he’s 27 and at the peak of his powers, he’s not going to get any quicker, and he might not get a tremendous amount slower. He’s that sort of player” – Andy Townsend.

Ice, ice baby
When the headline on the BBC football homepage reads ‘Cake, cancelled hotel stays and and a tactical revolution – how Sarri is transforming Chelsea’, Mediawatch has literally no choice but to Ctrl + F to find the word ‘cake’. Because the last thing we want to do is read about Jorginho’s passing stats again.

‘And the lighter touches can even be found on the dining tables, with the return of “luxuries” such as ketchup, salt and butter. Chefs now even prepare cakes for the players to enjoy and on away trips Chelsea’s players often have cartons of ice cream placed in a bowl.’

Mediawatch is left with just one burning question: Why the hell would you put a carton of ice cream in a bowl? It is already in a carton; it does not need another receptacle. What’s next? Packets of crisps in a basket? Boxes of cereal in a pitcher? Cups of coffee in a box?

Actually, make that quite a few questions. Oh and one more…do they mean a tub?

The big Revel
It is Friday, and so Paul Merson is here with his predictions for Sky Sports. But that is not the story, for the Magic Man has returned to one of his most glorious catchphrases. Twice.

Paul Merson, January 31, 2016: ‘They are going well in the league and Shrewsbury are inconsistent – they conceded seven against Chesterfield and then beat Burton away. They are a bag of Revels.’

Paul Merson, April 2, 2016: ‘If Man City don’t win on Saturday then this is a big game for United, but it depends what Everton side turn up – they are a real bag of Revels’

Paul Merson, September 28, 2018: ‘Both of them (Bounrmeouth and Palace) are a packet of Revels, you just never know what you’re going to get.’

He is Paul Merson, we love him, and he is most certainly not like a bag of Revels – you know precisely what you’re going to get.