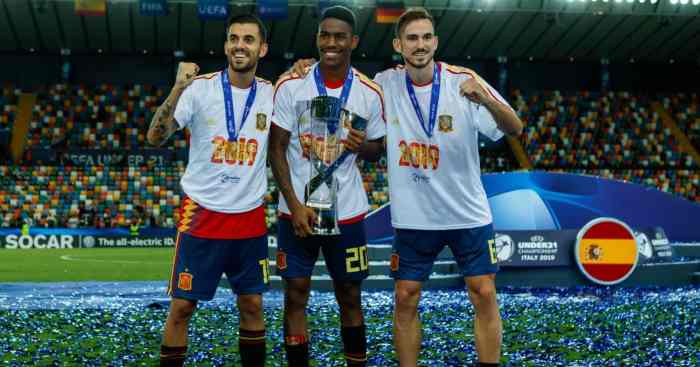 Real Betis have reportedly reduced the asking price for Junior Firpo who has been linked with Liverpool, Manchester United and Barcelona this summer.

The defender had been suggested as a potential solution for Liverpool as they look for a new back-up for Andy Robertson, but his €50m release clause was a concern.

Instead, Barcelona have emerged as the leading contenders for his signature, with the LaLiga champions appearing to land something of a transfer coup by agreeing an initial €27m deal with the Betis.

It was then claimed that Barca are in fact lining up alternative targets – including Manchester United’s Matteo Darmian and the Liverpool-linked Philipp Max.

Now, Spanish outlet Sport have offered an update on the situation, claiming that Betis have dropped their £32m asking price for Firpo.

Los Verdiblancos have now apparently told interested clubs that he is available for £23m (€25m), but Barca only want to spend €20m, meaning Liverpool may have a clear path.

The player meanwhile discussed his future over the weekend and admitted to being flattered by links with the Catalan giants.

“It is true that I have heard the stories of me moving to Barcelona,” he told Mundo Deportivo.

“I take real pride in this, and to be linked with a club like FC Barcelona is a compliment. But at the moment I am focused on pre-season training with Betis.

“I am so grateful to the club, because they have given me everything.”