Home Liverpool What will Liverpool do with Trent Alexander-Arnold? 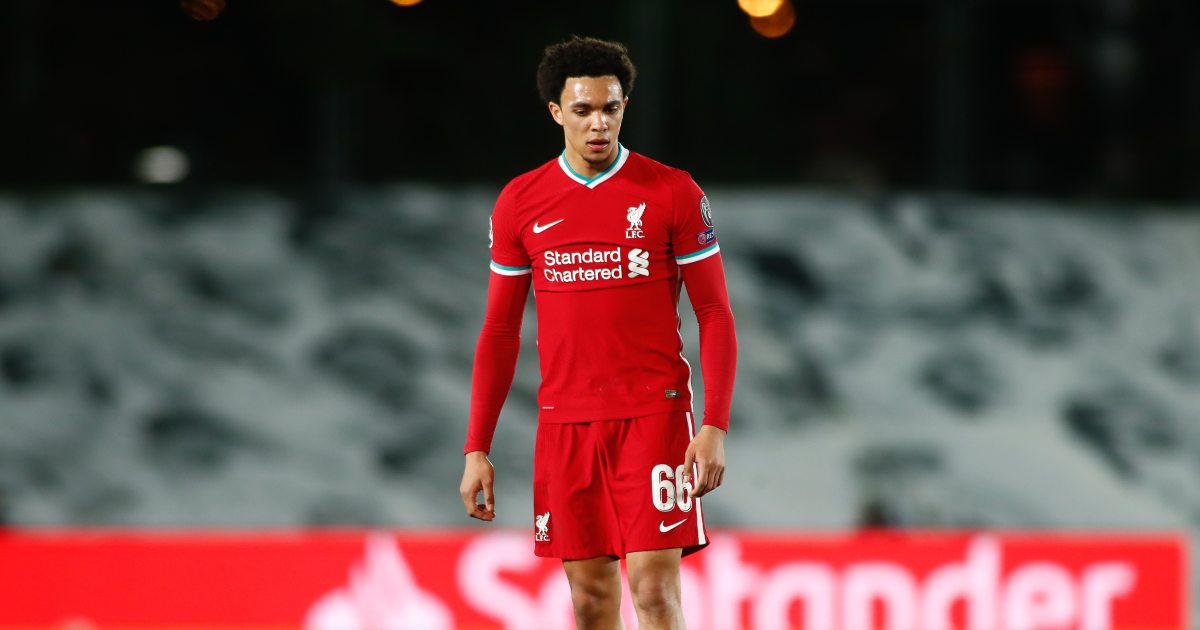 Thank you for your mails on Trent Alexander-Arnold and more. How bad were Liverpool? Send your mails to theeditor@football365.com

How do you solve a problem like Trent?
I’m probably one of many who’s going to mail in about TAA but Liverpool have a serious decision to make about him. If he’s a creative force in that team he can’t play at RB. Every manager from Solskjaer to Zidane has and will target that right side.

Alexander-Arnold is not quick enough to get himself out of trouble (Walker) and he’s not a good enough tackler to back himself one on one (AWB). If Liverpool want his creative forces in the team, he has to play right wing (not going to happen as he’s not a winger) or he has to be coached/trained/shoe-horned into a midfield role.

All the goals conceded tonight where his fault, he wasn’t quick enough to go with the runner on the cover for the 1st and the less said about the header that led to the 2nd the better, as for the 3rd he simply let’s Vinicius Jr just step off him and go get the shot away, no attempt to go with him, to make a tackle or try and put him off. From an offensive point of view (the reason he’s in the team) none of his crosses reached a red shirt, he lost possession 23 times (more than any other Liverpool player) and hiss pass accuracy rate was 76%.

Liverpool need to figure out how he fits into this team or cash in on him. If PSG or Bayern offer big money this summer I personally think Liverpool should take it and invest in the squad.
Robbie DFC
*now to create the ultimate website that combines my love of football and musical theatre.

Liverpool were schooled
Real Madrid absolutely schooled Liverpool in the art of defending tonight, and defending as a team.

It’s crazy because we actually defended quite well but conceded three goals. And at the other end it was impossible to get through the white wall apart from one lucky break. The lack of shots in the first half showed that Real just kept us at arm’s length all the time.

They were like an Italian or German giant, exceptionally disciplined and not at all the struggling outfit we were led to believe. Liverpool literally have no chance in our empty quiet stadium, if we’re lucky it will be 1-1 but the curtains will come down on our CL campaign next week.

I’ve heard a few times that the Champions League will be Liverpool’s redemption story this year, sorry but that seems far from likely now we’ve come up against a team that can actually play unlike a Premier League struggler.

I’m not suggesting any radical changes, just admiring the Spanish way and hoping the Reds recover form next season.
Paul in Brussels (too many sideways passes)

Less said about Trent, the better. Amazing talent, not sure why he can’t be left alone and focus on his football and by the looks of it, he’ll have an amazing career anyway. But no, let’s build them up to bring them down.
The Vocal Minority (For the first goal of the game was it a long pass or only Liverpool’s balls over the top count as long pass and everything else aimlessly hoofed long ball?)

Trent is broken
Half time in the Madrid v Liverpool game.

I’m not sure what Klopp can do to save Trent’s confidence here. Taking him off or leave him on? Either could destroy him. Vinicius could well have COVID and Trent isn’t getting close enough to catch it.

Southgate must be feeling justified.

It’s a sad thing to watch. All that’s left is for Thiago to get a red in the second half.
Pete B

Liverpool and their striker drop-off
Just finished watching the Liverpool game and a lot of the post-match discussion concerns Mane and his ‘drop off in form’. It seems to me that, among football fans at least, there isn’t enough appreciation for how quickly and drastically forwards drop off from around the ages of 26. This is particularly noticeable for players that have pace as their currency.

Now, I know what you’re going to say. There are exceptions of course. Lewandoski, ibra, Vardy, Ronaldo, all still ripping it up. 32 is the new 27 etc. But, they’re rare. Very rare. That’s why they’re so memorable.

To demonstrate this, I’ll categorise Man United strikers from the past 25 years into 2 groups.

So from this completely unscientific experiment, you can see that around 75% of strikers are completely done at Premier League level by the time they hit 29. There’s even some explanatory factors for most of those in group 2 – moved to weaker leagues, had the pace of milk float to begin with, etc.

Even Ronaldo and Messi are the archetype of this, in that they both peaked at ages 25-26, and have been declining in output around 10% every year since. Ronaldo’s peak was just so extraordinarily high that his tailing off (30% of the goals at aged 36)is still impressive.

Anyway, my point is this – apart from all their injury issues, Liverpool fans should’ve been expecting a huge drop off in goals this year from their front 3. Maybe one of them will carry on into their 30s (Salah) but I’d wager that he’s only 6 months behind the others in his goals drying up.
Jack, Dubai

Ifs and buts
If Nat Phillips had the same aggression on Vinicius as Vasquez did on Mané then we don’t concede the first goal. The ref had already shown he was being lenient and I think Nat Phillips was guilty of admiring the surroundings and the opposition and showing too much respect. He was weak for the third goal too although you could also argue Alisson should’ve done better there. It’s hard to criticise because he’s not really meant to be playing at this level.

That said, I don’t know if I’m more astounded that the foul on Mané wasn’t given or that McManaman on commentary somehow thought it wasn’t a foul.

I feel bad for Keita but that is his career at Liverpool over more or less. He’s barely featured all season when we have been awful and then, according to Klopp, trained his way into this team. Before the game Klopp said it was his ability to dribble that made him pick him today. His overall control was dreadful today but he wasn’t the only one guilty of it. After he came off we did look a bit more threatening but I think overall it was a mistake to play him. Arguably Curtis Jones would’ve been more interesting as he would’ve had the aggression and energy that might’ve disrupted Kroos and Modric.

Overall pretty disappointing. Not sure that Real Madrid were that good but we were definitely poor.
Minty, LFC

…Also seems silly to bother but Rio’s view on why the defence got cut apart strikes me as silly. VVD and Joe also got torn apart by Villa using the same tactic and exploiting the same mistake. The issue wasn’t that the defence needs to drop 5 yards strictly but they needed to be more set up.

Liverpool have been guilty all season of the defenders playing the high line and getting caught facing the play. For the first goal Kabak, Robertson and Trent are all watching the game side on but Phillips is square to the play. It means that he’s totally ripe to have a ball played over him and once it happens he can’t turn and get moving quickly enough. If he’s side on to the play then he’s ready to start running and probably gains an extra yard which might help prevent the goal.

In Rio’s time it was normal for him, Terry or Carragher to be a bit deeper than the defensive line but I’m not sure that tactic would be as effective in the modern game when the inverted wingers are much more common and you end up being at risk of having the ball played in behind the high line down the wings.
Minty, LFC 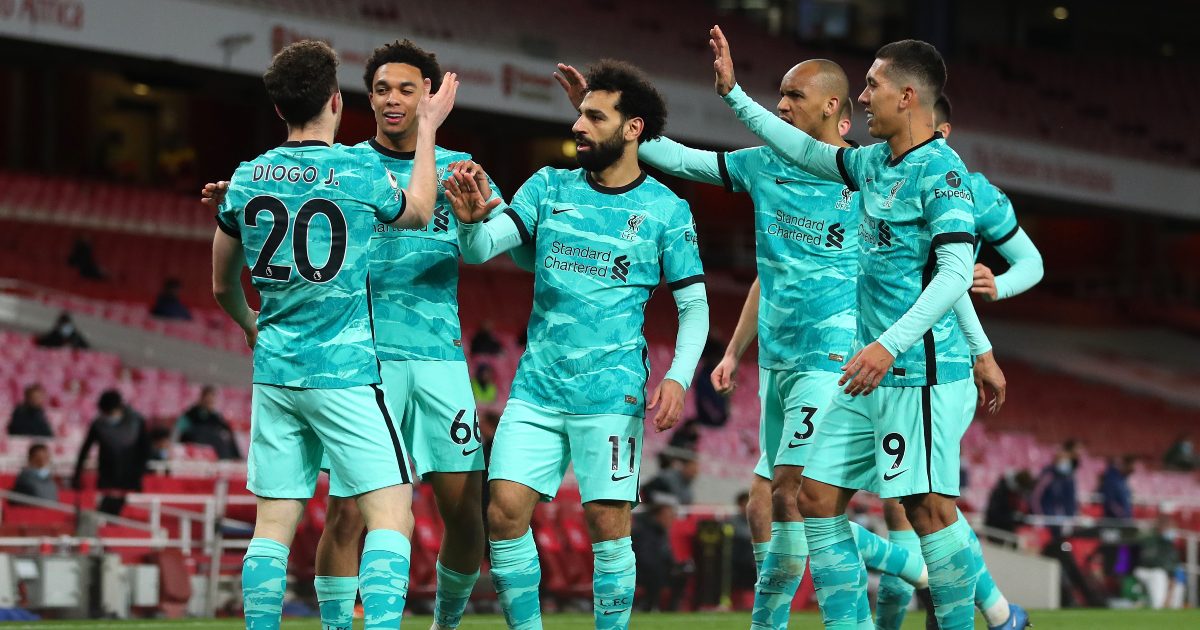 How bad were Arsenal?
Just finished watching Liverpool vs Real Madrid and I have to go back to the weekend. Were Liverpool really that good against Arsenal, or they just came across a team that was rotten to the core. Today there has been a lot of school boy defending from the English champions giving away free and silly goals!
Carey (frustrated gooner) Yiembe

Getting nostalgic
There was a time, it feels not so long ago, when the Premier League prided itself on being the most entertaining, full-blooded league in the world. A league where reputations were disrespected, any team could beat any team on any given day and matches were a see-saw battle of pashun and grit. It wasn’t as technical as the Spanish league, or as tactical as the Italian league, but it was the best spectacle.

So what happened exactly? Over half of matches these days follow a similar pattern: the ‘big’ team keep the ball, but run into a brick wall of 10 defenders, and in a tiny fraction of those matches a random bounce, free kick or mistake lead to the ‘little’ team grabbing a point. The ‘entertainment’ becomes basically how long it takes for the ‘big’ team to finally create a decent shooting chance.

Or you get the ‘relegation six-pointers’ – where each side try to out de-risk the other, before realising with 3 minutes of added time left that maybe those 3 points would be better than a draw.

Ditto the ‘top 4 six-pointers’, where fear of a loss makes hugely expensive players forget how to express themselves.

Then there’s the point-hoovering machine that is City. Who will keep the ball for 5 minutes at a time but aren’t fussed with the whole trying to score business. And yes, I know they do eventually, and if I was the defending team quite often I’d let them just so something can actually happen. Where the most expensive squad assembled in human history routinely cause me to reach for my phone hoping for a work email to break tkhe monotony.

I guess my point is that I kind of see the love for Leeds. Football is supposed to be about two teams attempting to score against each other, where the finances or reputations of each side are scrapped the moment eleven players enter the fray. But aside from matches between two mid-tabled sides, it’s incredibly rare in the Premier League these days. And man could we use some vicarious fun right now.
Ryan, (totally not just getting old and nostalgic) Bermuda