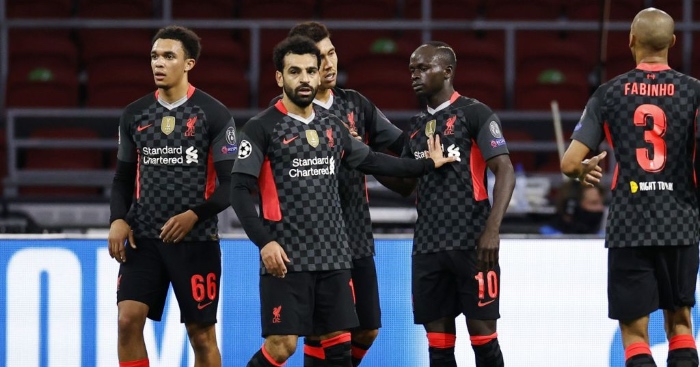 It’s fair to say that buying newspapers is going out of fashion but never has that been so ably demonstrated but by the back page of The Sun, merrily making a 55-year-old cultural reference when there was literally no need.

Who sees that Liverpool have won a game without Virgil van Dijk (but with the excellent Fabinho) and thinks of Thunderbirds? Nobody under the age of 60, that is for certain.

But on The Sun go, pandering to old men in old vans, with this:

When your cultural references are 55 years old, you know the industry is on its arse. pic.twitter.com/BgXNDkrbaq

Clue: If you need an asterisk to explain your headline, you have chosen a bad headline.

They should be so lucky

In the inside pages of The Sun, Charlie Wyett has grabbed hold of a narrative and he is not letting go…

‘The only shock was that this ugliest of winners actually went in Jurgen Klopp’s favour.

‘When you consider the unbelievable misfortune being dumped all over the Premier League champions. they probably deserved a moment of light relief in Amsterdam.

‘After a torrid month in which Liverpool were knocked out of the Carabao Cup to Arsenal, thrashed 7-2 by Aston Villa and then drew 2-2 with Everton – plus the nightmare injury to Virgil van Dijk – Klopp will have taken anything.’

Nice. But there’s absolutely nothing unlucky or unfortunate about losing 7-2. Or indeed being knocked out of the Carabao Cup.

Losing Van Dijk to injury is certainly unlucky. But that’s not ‘unbelievable misfortune being dumped all over the Premier League champions’; that’s one injury. Literally every other outfield member of Liverpool’s first-choice XI from their title win is available.

Still, you got your intro. And you didn’t even mention an animated series from the 1960s.

Brian Reade is very angry about Jordan Pickford and the over-protection of goalkeepers in his Daily Mirror column but he begins in a very odd way indeed.

‘BACK in October 2007 we witnessed a rare sight at Villa Park.

‘As Manchester United striker Carlos Tevez rounded Aston Villa’s Scott Carson in the box, the keeper hacked him down and referee Rob Styles pulled out a red card.

‘There were no complaints, not even from the keeper, as the decision was an easy one. A player had committed a red-card offence so, regardless of whether he wears gloves or not, he walks.

‘Yes, as statistician Bill Edgar has observed, in the 13 years that followed, no goalkeeper has been sent off for a dangerous tackle in his own penalty area. Not one. In almost 5,000 games.’

That is such an astonishing statistic that our first thought was to check. And that should probably have been the first thought of Brian Reade and/or somebody at the Mirror.

We are not about to examine every goalkeeper red card since 20o7 but we did go back as far as 2015 and found two Thibaut Courtois red cards for dangerous tackles in his own penalty area in one season (v Swansea and Manchester City). And Ederson was sent off for a dangerous tackle just outside his own area as recently as last December.

Goalkeepers are indeed overprotected but so are columnists who claim to be ‘at the heart of football’.

At some point over the last five years, somebody decided that the dullest quotes somehow become sensational if you pretend they are a ‘message’.

On the Mirror football page as it stands at 11.30am, Giggs is sending a ‘message to Man Utd youngster Axel Tuanzebe after PSG performance’.

And how did Giggs sent this message? Via text? Zoom? Carrier pigeon? No, via Youtube show Webby & O’Neill of course, which is everybody’s favourite messaging app of choice, after WhatsApp.

Also, ‘Jack Wilshere sends Arsenal a message about Mesut Ozil as he wades into argument’. Surely he could find an easier way of sending a message to his own club than replying to a Gary Lineker tweet on, well, Twitter? He probably has Mikel Arteta’s number.

But maybe Arteta is too busy sending his own messages to reply; he has been sending ‘a blunt message to Mesut Ozil after he slams Arsenal in angry statement’. Via a press conference. Again, we are pretty sure he has his actual number.

And all those stories reveal one thing: The most-read story within Mirror Football over recent hours is this one:

Now he might well have done. But not via the medium of answering a pretty dull question with a dull answer on BT Sport.

Make room for me

But if there is one thing better than a ‘message’, it is when somebody ‘opens up’ or ‘becomes more communicative or confiding’ as the dictionary would have it.

And one man who probably needs to ‘open up’ at the moment is Paul Pogba, who seems a little troubled. So we were pleased to see this headline on the Express website.

And what did he say? How exactly did he open up? Does he feel rejected?

“All the players were ready for this match — the result came as it should have come. They had chances, we also had some and we materialised. The result is positive.

“It [his substitution against PSG] was prepared. We had prepared well for the match.

“We know that they are very strong offensively, and we had to block that. Afterwards, we started especially well and we had chances. [We] managed to score.”

Recommending watching of the day