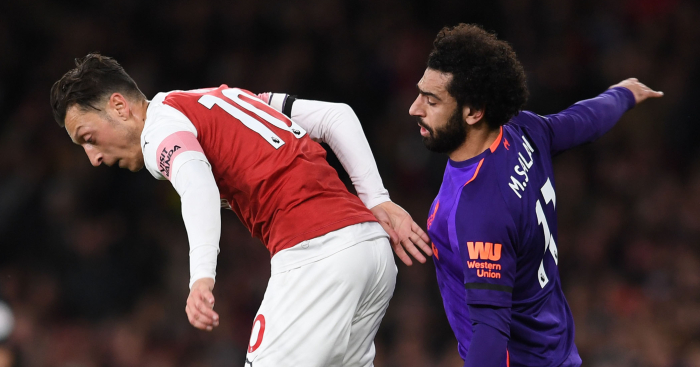 Liverpool’s six-point lead at the top of the Premier League has made them the bookies’ favourites to lift the title in May, and yet by January 3 they could be back down in second. Or they could be 12 points ahead of Manchester City. There’s a genuine possibility it will be the latter.

So Jurgen Klopp won’t be satisfied with a draw on Saturday, which could mean we finally get a high-scoring ‘Big Six’ game at Anfield this season. Arsenal’s form has been patchy of late and their defence is vulnerable, but going forward they possess the pace and directness required to expose Liverpool’s high line.

Here are five tactical questions ahead of Liverpool v Arsenal:

1) Can Arsenal draw Liverpool out to create a high-scoring game?
It’s been a while since Liverpool last took part in a chaotic end-to-end Premier League match, but the stage is set for one on Saturday evening. A key Unai Emery tactic is to draw the opposition forward by playing out from the back, inviting pressure onto themselves before suddenly changing gear and piercing through the pitch.

With Arsenal’s defensive injuries the passing in their own half will be shaky, which increases the likelihood of Liverpool pressing high, rather than showing caution as they did against Chelsea and City earlier in the campaign. Given that the Gunners have serious pace up front and Emery instructs his full-backs to push up no matter the opponent, it is easy to envisage Liverpool’s defence finally being stretched on the counter.

This in turn will elongate the pitch as Liverpool look to hit back. Neither side can resist an invitation to break forward into space. There should be goals.

2) Will Mane versus Litchsteiner be the key battleground?
The biggest mismatch is on Liverpool’s left, where in-form Sadio Mane is likely to get the better of Arsenal’s second choice right-back Stephan Lichtsteiner. The Swiss was directly at fault for Brighton’s equaliser on Boxing Day, misjudging the flight of a long ball to let Jurgen Locadia through on goal. His confidence will be fragile, then, ensuring Liverpool will target his flank.

Mane will certainly win any race against the 34-year-old, and with Lichtsteiner still adapting to the speed of English football Liverpool’s left winger can cause trouble with a sudden burst of energy. Mane’s quick turns – darting through the lines unexpectedly – have provided game-changing moments in several recent Liverpool matches, most notably in the 1-0 win at Napoli.

Emery may revert to a back three to provide Lichtsteiner with support on that side, although Arsenal’s mounting injuries limit the manager’s options. Switching formation would mean playing a full-back in the middle; a counter-productive move considering Liverpool’s attacking threat.

3) Can Arsenal’s Ozil-inspired front three exploit Lovren’s weaknesses?
Arsenal were significantly more blunt in the second half at Brighton after Mesut Ozil’s substitution, which hopefully means Emery will, for the third successive game, start the German in the No 10 role behind two centre-forwards. It is a front three that possess the pace and guile needed to stretch Dejan Lovren to breaking point.

Liverpool are significantly weaker at the back without Joe Gomez’s pace to sweep up behind, and although Lovren is yet to make an error it is surely only a matter of time. The Croatian performed well in the 0-0 draw with City in October, but Arsenal are an entirely different prospect; Liverpool will expect to dominate, and therefore hold a higher line, while Arsenal have the rare commodity of pace through the centre.

It is easy to imagine Ozil picking up the ball (in the spaces vacated by Fabinho and Jordan Henderson) and spraying a through ball for Alexandre Lacazette and Pierre-Emerick Aubameyang to chase. Ozil’s superb pre-assist for the opener against Burnley last Saturday was a reminder of his talent. Should Liverpool get ahead of themselves Arsenal’s playmaker could make a telling contribution

4) Does Shaqiri’s distribution offer Liverpool the chance to embarrass Koscielny and Sokratis?
Then again, it’s hard to escape the feeling Liverpool’s forwards have too much ingenuity for such a disorganised Arsenal defence. Emery is likely to play Sokratis alongside a rusty Laurent Koscielny at Anfield, and judging by the Brighton game these two are speaking different languages at the moment.

Brighton achieved an xG of 1.35 on Boxing Day, their highest since a 2-2 draw at Southampton in mid-September, while Arsenal haven’t kept an away clean sheet against a club in the top half of the table since mid-September – of 2017.

Their biggest problem is coping with transitions, due in part to the persistently high starting position of the two full-backs/wing-backs. Sokratis and Koscielny will be too exposed to the pace and trickery of Mohamed Salah, particularly if Klopp selects Xherdan Shaqiri and his more attack-minded 4-2-3-1 formation. Shaqiri’s long, searching balls forward will pull Arsenal’s defence out of shape, exposing the slowness and disorganisation that threatens their push for a top-four finish.

5) Can Kolasinac get the better of Alexander-Arnold?
But pushing the full-backs on does have its advantages. Sead Kolasinac’s overlapping runs have been an important element of Arsenal’s attacks whether in a 4-3-1-2 or 3-4-2-1; he is statistically their most creative player (1.8 key passes per match) and second best crosser (0.6 accurate crosses per match).

Trent Alexander-Arnold is still prone to being caught out of position and then rushing into recovery challenges, which gives Gunners fans reason to be optimistic about their head-to-head. Arsenal attack down the left more frequently than any other Premier League side (41% of the time), so it’s fair to predict Kolasinac will see plenty of the ball at Anfield. His runs on the outside of Alexander-Arnold are, perhaps, the visitors’ best route to goal.