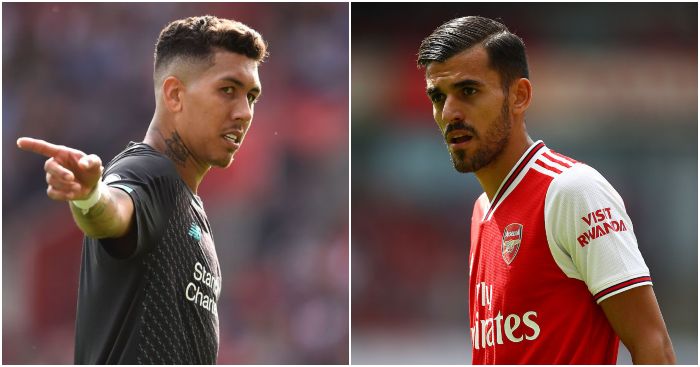 If there’s one thing we can pretty much guarantee from Liverpool and Arsenal matches, it’s goals. We’ve seen 44 of them in the last ten meetings between the two sides, usually because Arsenal are chaotic, pouring forward against one of the best counter-attacking teams in the country without a second thought about the frailties of their own defence.

But Jurgen Klopp also seems particularly tempted to go hell for leather in these games. He just can’t resist the downright fun of it all; the thought of gegenpressing wildly and creating an attacking frenzy is just too enticing for a manager who loves to entertain.

It should be a great game, then, with Liverpool’s high line and Arsenal’s new ability to weave away from the press hopefully stretching the pitch long and wide. Here are five tactical questions ahead of Liverpool v Arsenal:

1) Will Liverpool’s higher line pin Arsenal back, or leave them vulnerable to the counter?

A lot has been made of Liverpool’s supposedly higher line in the Premier League this season, with the introduction of VAR given as the reason why they’re stepping up and catching opponents offside more often than any other club. But it’s hard to believe Liverpool would change their tactical approach on the basis they can trust officiating better – assistant referees hit a 98% accuracy average prior to VAR – so Klopp’s higher line is more likely due to the quality of their the teams they have faced so far.

Nevertheless, Liverpool will remain pretty high this weekend, trusting the pace of Virgil van Dijk and Joel Matip to recover should Arsenal break in behind them. The obvious issue with this approach is it leaves them vulnerable to the speed of Nicolas Pepe, Alexandre Lacazette, and Pierre-Emerick Aubameyang on the counter, but this will only be problematic should David Luiz take control of the match by launching long balls over the top of the defence. If Arsenal don’t play long balls – significantly altering their tactics in the process – then Liverpool’s high line won’t actually be a concern, given the speed with which their centre-backs move up and down the pitch.

However, such an aggressive defensive line probably won’t successfully box Arsenal in, either. Klopp will be hoping to deploy his gegenpress to prevent the Gunners from counter-attacking, but after a successful summer window they now have the right players to work around Liverpool, breaking forward and stretching the pitch.

2) Should Arsenal press from the front, or sit deeper and rely on breakaways down the flanks?

Liverpool’s strategy is easy to predict, but Unai Emery is faced with a dilemma. He could instruct his players to press from the front and match Liverpool’s approach, particularly after Adrian’s mistake against Southampton last weekend. It isn’t in Arsenal’s nature to play conservatively, and to do so at Anfield risks being overwhelmed; if they set up to face Klopp on the back foot, their dicey back four could be carved open. Attack is perhaps the best form of defence.

Then again, given their continued problems on the road – Arsenal seem incapable of playing with urgency away from the Emirates – Emery will probably go for a midblock, giving Liverpool’s defenders as much time as they want on the ball but squeezing high enough up the pitch to stop Roberto Firmino and Sadio Mane finding space in between the lines of defence and midfield.

The good news for neutrals is that with three quick forwards, a leaky defence, and a midfield capable of working around Liverpool’s press, the two clubs’ respective formations should encourage counter-attacks, elongating the pitch and swinging the game from one end of the pitch to the other. Arsenal’s initial conservatism is unlikely to last.

3) Can Ceballos and Willock outmanoeuvre Liverpool to cause an upset?

There was one particular move against Burnley last weekend that gives Arsenal fans hope of a clear tactical direction under Emery this season. Joe Willock and Matteo Guendouzi exchanged sharp passes on the edge of their own area to work around the Burnley press and release Dani Ceballos, who broke forward and fed the ball back to Guendouzi for a shot that hit the legs of Nick Pope. Here was a rare example of the plays we saw Emery inspire at Sevilla: possession football to draw the opponent out, and then a quick tempo change to launch a counter in behind.

This is clearly the best method to evade Liverpool’s pressing, expose their high line, and get the front three on the ball in the final third. Ceballos holds the key, his weaving footwork in central midfield likely to make for a fascinating battle with Fabinho, while Willock’s ability to keep up with the tempo of the game will also be crucial for the visitors. Without these two on form, Arsenal won’t be able to shift forward quickly enough to get behind their hosts, leading to a gradual decline in energy until Liverpool swarm them and peg them back, as they did in the 5-1 victory at Anfield in December.

4) Are Arsenal vulnerable to Liverpool surges down the flanks?

Arsenal’s weakest area of the pitch, their full-back positions, correspond to Liverpool’s strongest; Salah and Mane constantly look to receive the ball in the channel between the full-back and centre-back, turning in possession and driving at the heart of the defence. Even with Luiz strengthening that area, the thought of Ainsley Maitland-Niles and Nacho Monreal dealing with Liverpool’s forwards should terrify Arsenal fans.

It gets worse. As the wide forwards move infield they force the opposition full-backs to tuck in, opening up space for the overlapping runs of Trent Alexander-Arnold and Andy Robertson. With Reiss Nelson or Pepe on one side and Lacazette on the other, Arsenal’s full-backs are unlikely to get the support they need to cope. For all the tactical uncertainty in the two team shapes and their relative abilities to press and counter, the obvious mismatch down the flanks could make this a rather simple game – and a humbling one for the Gunners.

5) Will Guendouzi and Willock be caught flat-footed by Liverpool’s fluid midfield?

Assuming the game does indeed open up, an area of concern for Arsenal is the possible flat-footedness of their central midfield. Guendouzi is a talented footballer but can often be caught too static in games Arsenal are unable to control, while Willock is arguably too inexperienced to control the midfield battle against Liverpool’s positionally interchanging trio in the middle.

Two of Alex Oxlade-Chamberlain, Jordan Henderson and Georginio Wijnaldum will burst forward either side of Fabinho to support the front three, and given their intelligence and synchronicity at Anfield, Arsenal’s midfield axis could find themselves a bit lost. They could dragged wide to support their full-backs or pulled out by Firmino. Whichever way you look at it, an end-to-end match favours Liverpool.