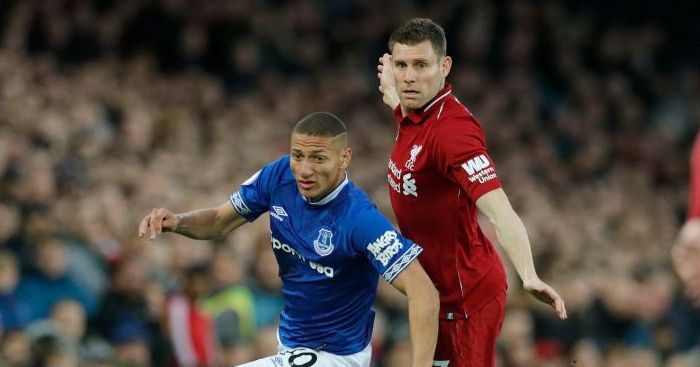 1) Will either side spring a set-piece surprise?
While the proverbial window’s immediate vicinity is littered with form books – as is wasteful and reckless derby tradition – both Liverpool and Everton will know they cannot discard and discount every aspect of their recent performances. Not that the hosts will want to: their current main strength matches their opponent’s greatest weakness.

Sri Lanka must have taken particular delight in Liverpool’s win over Brighton, with Trent Alexander-Arnold assisting their 39th and 40th set-piece Premier League goals since the start of last season. In that same period – non-coincidentally marking the beginning of Marco Silva’s reign – Everton have conceded the most such goals of any side.

It is this game’s worst-kept secret. Silva must realise a poorly implemented zonal marking system is a flashing target on Everton’s backs. That makes it no easier an issue to rectify in such a short space of time. Jurgen Klopp will know where, when and how to aim for it.

2) Could Klopp revert to derby type?
It might be true that Liverpool are yet to truly play to their capabilities this season, but a) they haven’t had to, and b) that only goes to emphasise how effectively Klopp has managed both their challenges and this squad so far. That will be put to the most stringent test possible this month with at least two games a week until mid-January.

The German will not shuffle his deck completely. Four players have started every Premier League match for the leaders and that will likely continue. But such a busy schedule demands a certain level of rotation for every fixture, especially if they want to remain the soccer betting favourites with Betway each week – which currently would be working out well for anyone backing Klopp’s red men.

Some changes will be enforced, such as Adrian’s recall. Joe Gomez could come in again, as may Adam Lallana. Naby Keita might be in line to feature, with Divock Origi staking a similar claim – he may be another one to back as anytime goalscorer with Betway. Yet the vice-captain should expect to be called upon. Klopp started James Milner in his first seven Merseyside derbies, with his positions ranging from left-back to the right wing and central midfield. The only reason he played just 27 minutes of their meetings last season was due to the emergence of Fabinho. But in the Brazilian’s absence and with a pressing need for discipline and energy, Milner will surely make his first Premier League start since his increasingly important goal and assist against Leicester in late September.

It might not be a popular selection; supporters would prefer to see Alex Oxlade-Chamberlain or Keita unleashed against such a vulnerable side. But the former’s unique drive and skill set is held back by inconsistency, while the latter has only recently returned from injury. There is a place for pragmatism and Milner alongside Georginio Wijnaldum and Jordan Henderson should be more than enough to counter the flimsy trio of Tom Davies, Morgan Schneiderlin and Gylfi Sigurdsson and provide a platform for the full-backs and forwards.

3) Will Silva resume his defensive experiment?
Only thrice before had Silva used a three-man defence at Everton. Much as he did against Manchester City (1-3), Burnley (5-1) and Brighton (0-1) last December, he reached for his comfort blanket against Leicester (1-2) on Sunday as the creeping winter cold set in.

It almost worked. The extra man helped Everton cope with the pace and movement of Jamie Vardy, Harvey Barnes and Ayoze Perez, as well as the nous of James Maddison and Youri Tielemans. They had seven shots to Leicester’s eight in the opening hour, despite having less than 30% possession.

The Foxes were contained until Brendan Rodgers responded by introducing Kelechi Iheanacho, changing Leicester’s shape and addressing the numerical disadvantage. The final half-hour saw the hosts have a further seven shots – three on target – to Everton’s two as another result slipped through their fingers.

Silva would be foolish to scrap the approach altogether. Everton cannot hope to counter Liverpool’s front three with a back four, and the defensive improvement it engendered against Leicester should not go unnoticed. But the manager has to react quicker and more effectively as and when the game changes.

4) Can Everton establish an early foothold?
Sunday really did feel like a dress rehearsal of sorts for Silva. An away game against a team dangerous on the attack and difficult to breach in defence saw him set up to score early and hold on for as long as possible. Expect a similar plan at Anfield.

It might be their one hope. Only Manchester City (6) and Bournemouth (5) have scored more goals in the first 15 minutes of games this season. Three of Everton’s four wins have featured goals in the opening quarter of an hour (Tom Davies v Southampton, Richarlison and Alex Iwobi v Wolves, Bernard v Watford), with the the 2-0 victory over West Ham, when Bernard scored in the 17th minute, the sole outlier.

The Toffees have conceded more second-half goals (16) than every side bar Aston Villa (17), so will almost certainly need to have established an unlikely half-time foothold to continue an unexpected climb to a result. It’s just a shame that no side has conceded fewer first-half goals than Liverpool (4).

5) How will Klopp revitalise his front three?
The early removals of both Mohamed Salah and Roberto Firmino against Brighton, with the result far from beyond doubt, told two stories. First, that both were surely being kept fresh for Wednesday. But also that neither particularly deserved to continue on the day: Salah had two off-target shots and created one chance; Firmino had two shots, both on target, but created no chances.

Sadio Mane scoffs at mortal concepts like fatigue and rotation so should start to maintain his record of playing in every Champions and Premier League game since December 5 last year. Klopp will know that getting Firmino and Salah to mirror his form of four goals and one assist in eight appearances can turn recent narrow 2-1 victories into three or four-goal strolls.

Klopp has only ever started Mane, Firmino and Salah against Everton once, albeit in a 4-2-3-1 with Xherdan Shaqiri on the right-hand side of the attack at Anfield last year. So Everton have never actually faced the real iteration of Liverpool’s fearsome front three, never mind at such a low ebb. It could be that no tweak is needed to relight their spark, just a confidence boost from accommodating guests.