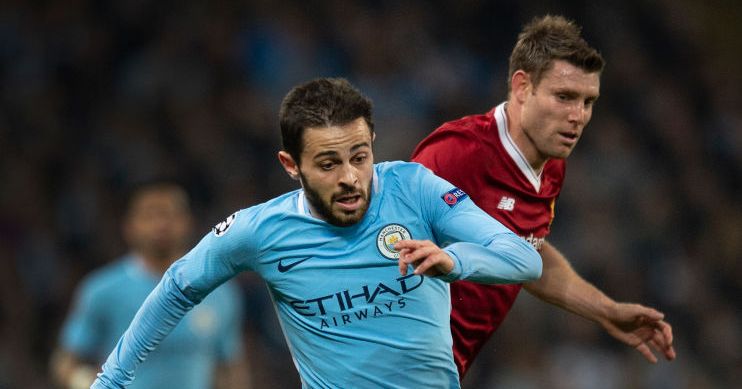 The 2019/20 Premier League title will almost certainly be decided by fewer than six points, so the head-to-heads between Liverpool and Manchester City can be isolated as the definitive moments in the race. It really could come down to what happens on Sunday and in April.

Or perhaps what doesn’t happen. This fixture finished 0-0 last year, which looked to be a decent result for both sides at the time but subsequently proved fatal for the hosts. Liverpool may feel they have to take advantage of playing at Anfield, even if right now another goalless draw would leave them in the driving seat.

It might be claustrophobic, and it might be low on goalmouth action, but that hardly matters. With so much on the line, with every attack loaded with the potential to define an entire campaign, it will be a captivating 90 minutes.

1) Will risk-averse tactics lead to another 0-0 at Anfield?
Although historically these games have been delightfully chaotic, Pep Guardola has found a way to guard against the sudden Liverpool blitzes that used to give Jurgen Klopp the upper hand. The hosts are too strong in the transitions for Man City to pour bodies forward as they used to, and having been burned multiple times Guardiola has now accepted that he cannot match Liverpool at their own game.

This fixture ended 0-0 last year after Riyad Mahrez missed a late penalty, and it seems highly likely this contest will follow a similar pattern. The match was not dull – compressed formations and high-tempo passing made for an intense, absorbing contest – but there might not be many chances, mainly because City in particular won’t take any risks.

Like last year, Guardiola will probably instruct both full-backs to stay deep, deploy Bernardo Silva in a deeper midfield role to make a 4-2-3-1, and hold a mid-block rather than press high. The result should be an oppressive contest with few goalscoring opportunities.

2) Will Guardiola switch to 3-5-2 to protect against Liverpool’s full-backs?
Then again, last year Klopp picked Joe Gomez at right-back, which surely won’t happen this time. Liverpool’s full-backs are only growing in prominence, so much so that Trent Alexander-Arnold and Andrew Robertson are now regularly seen exchanging passes from flank to flank. Crucially, it was these long diagonals, stretching the defence, that were conspicuously absent in stilted creative performances against City last season.

Guardiola will need to come up with a specific plan because, at Anfield, he cannot expect his wingers to simply pin them back. Manchester United and Sheffield United both stunted Liverpool recently with a 3-5-2 formation, creating a blueprint that future opponents are expected to follow en masse.

The system’s main benefit is allowing wing-backs to push higher, therefore closing down Alexander-Arnold and Robertson before they can cross into the box. It also allows two strikers to split into the areas vacated by the full-backs as they push on, as well as maintaining control of midfield (in a three) and creating a three-on-three between the centre-backs and the Liverpool forwards.

Given City’s on-going problems at the back, it might be the ideal way to frustrate the hosts.

3) Will Man City’s focus on crossing exploit Liverpool’s narrow 4-3-3?
The biggest difference at Man City between this season and last is their increasing reliance on crosses into the box. This is most notable when facing a deep-lying defence and things get desperate late in the game, hence the 68 crosses thrown in against Southampton last weekend, but it is always one aspect of Guardiola’s tactics now Kevin de Bruyne has been redeployed out to the right.

De Bruyne no longer chiefly operates as a number eight in the half-spaces, instead drifting out to the right flank to swing in early crosses; the classic City goal has changed from byline pass and tap-in at the back post to a fizzing cross from De Bruyne 30 yards out followed by a simple finish. This tactical shift could be just what Guardiola needs to create more than the six shots mustered at Anfield last year.

Liverpool’s 4-3-3 can leave a little too much space in front of the full-backs, relying as it does on the midfield three to cover the width of the pitch. Klopp will expect Sadio Mane and Mohamed Salah to drop into a 4-5-1 shape when City have the ball for long periods, but ultimately there will be moments on Sunday when the forwards are still high up the pitch.

De Bruyne might need man-marking, then, with James Milner the most likely option to start on the left side of the Liverpool midfield.

4) Can Firmino and Salah provide the telling moment against Otamendi and Angelino?
Whatever their respective setups this will surely be a very tight contest with space minimised in all areas of the pitch. But while at one end Virgil van Dijk can be relied upon to dominate a crowded penalty area, Nicolas Otamendi and either John Stones or Fernandinho (or both) cannot be trusted to track Liverpool’s front three in the split-second moments.

Roberto Firmino has been in exceptional form this season, his subtle one-twos with Mane and Salah providing the spark on countless occasions. The Brazilian is surely favourite to outmanoeuvre Otamendi, ghosting into pockets at the last second to catch the oft-confused City centre-back flat-footed. Given that the title may well be decided in these tiny moments in the penalty area, Otamendi’s tendency to switch off could prove critical.

Similarly Salah, in the rare moments he is able to turn and square up to the City defence in the final third, has the pace and agility to move beyond the inexperienced Angelino. The Spaniard is likely to get the nod ahead of Benjamin Mendy, rarely trusted when City have a lot of defending to do, which hands Salah a crucial advantage. His one-twos with Firmino, and gliding diagonal runs, could make the difference.

5) Will substitution and in-game tweaks open up the game?
Liverpool v Man City matches are always engrossing because of the sheer volume of changes and counter-changes made from the touchline. Klopp and Guardiola are always inside each other’s heads, and indeed the moves they make on Sunday should prove decisive considering how tense, compact, and exhausting the first hour will be.

When Liverpool are chasing the game Klopp usually switches to a 4-2-4, but that would surely be far too open here. Instead, the most he is likely to risk is a more attack-minded, line-breaking midfielder to come into the 4-3-3. Alex Oxlade-Chamberlain, with four goals in his last four games, could have a big role to play.

City’s go-to change when in need of a new approach has been to bring Gabriel Jesus on alongside Sergio Aguero and double down on crosses, although this is unlikely to be successful with Van Dijk in the middle. Instead, fresh legs out wide are Guardiola’s best option. Leroy Sane came off the bench at Anfield last year to win a penalty; Mahrez, who missed the spot kick, could have a telling role to play once again.