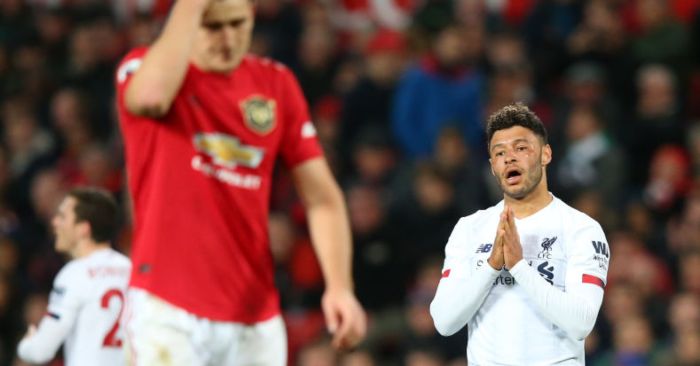 Liverpool have made something of a habit of playing the Manchester United badge, rather than the players themselves, over the last 12 months. It is the only way to explain how Ole Gunnar Solskjaer remains unbeaten against Jurgen Klopp as United manager, first holding Liverpool to a 0-0 draw in February 2019 and then a 1-1 stalemate at Old Trafford in October. The first game effectively cost Klopp the title. The second has so far denied him perfect league record.

But football is as much psychological as tactical, and indeed should Liverpool once again show nervousness or hesitation – the risk-averse option as they fear their unbeaten run ending – then Man Utd’s tactics could be precisely what is needed to take advantage.

1) Will Solskjaer repeat the 3-4-1-2 that almost led to victory last time?
The most obvious thing for Solskjaer to do is repeat exactly the plan that surprised everyone at Anfield in the reverse fixture. Man Utd lined up in a 3-4-1-2 formation with Marcus Rashford and Daniel James playing as split strikers – and Andreas Pereira as an unusually effective number ten.

In attack, the basic idea was for the United wing-backs to stretch Liverpool’s back four wider than they would have liked, in turn opening up gaps between full-back and centre-back for Rashford and James. Their inside runs pulled Liverpool back and dragged the hosts into the game, leading directly to the opening goal as the United strikers exchanged passes to score.

Defensively, the system replicated what Sheffield United did in an extremely unlucky 1-0 defeat to Liverpool a fortnight earlier. Using three centre-backs meant Man Utd could go man-for-man with the narrow Liverpool forwards without being pulled too far from the marauding full-backs; Aaron Wan-Bissaka and Ashley Young had the freedom to get tight to Andy Robertson and Trent Alexander-Arnold when necessary.

However, in the final 30 minutes United backed off considerably, inviting pressure in a narrow 5-3-2 that allowed Liverpool to scramble in an equaliser.

2) Does Fabinho’s absence give United a counter-attacking advantage?
Whether or not Solskjaer plumps for the same system, the basic tactical asymmetry between the sides could favour United. It is no secret that they struggle when asked to hold the majority of possession (a consequence of poor quality coaching, meaning the players have no idea how to pull a defence out of shape), but excel when allowed to sit back and break at speed down the flanks. United have won 14 points from eight games this season against the Big Six plus Leicester City.

Throughout the last 12 months there have been fears that Liverpool’s ultra-attacking full-backs will leave too much space behind them for counter-attacking opponents, but it never quite seems to happen. That is down to the brilliance of Liverpool’s high press (stamping out counters at source) and the sweeping of Virgil van Dijk. However, without Fabinho to screen the Liverpool attacks, perhaps United will finally break out – releasing Anthony Martial and James into the channels.

For this to happen Fred will need to be at the top of his game, repeating the exceptional display that led United to a 2-1 victory at Manchester City in December. His ability to pick up loose balls, weave away from the press, and spread the play into the channels was vital at the Etihad. Another performance like that and United’s natural compression will serve as a strong foundation to steal at least a point.

3) Can Salah’s advantage over Williams make up for Wan-Bissaka’s strength against Mane?
Liverpool’s best chance of stunting United is to direct attacks down the right flank, where 19-year-old Brandon Williams remains a weak spot for Solskjaer despite a valiant effort to replace Luke Shaw. Even if United go for three at the back there will inevitably be stretches of the game when it is a flat five, and a preoccupied quintet at that.

Mohamed Salah’s direct running at Williams is a big problem for Solskjaer, and as Roberto Firmino drifts over to exchange one-twos it is easy to imagine Liverpool’s in-form attackers blowing away the young left-back. Fortunately for United, they shouldn’t have the same problem on the other flank where Sadio Mane is tasked with beating the league’s best tackler, Aaron Wan-Bissaka.

Defensive injuries mean Solskjaer may simply not have the bodies to play three at the back. Should United play in a 4-3-3 then – with Liverpool’s full-backs stretching the defence and Mane and Salah dropping into the gaps in between – it is hard to see how even Wan-Bissaka can keep track of the attackers.

4) Or will Liverpool’s swirling midfield simply pin back a McTominay-shorn United?
There is, of course, the danger that all of the above points are overthinking the tactical battle. There is a reason for the 27-point gap, and a reason why Liverpool steamroller everyone they face; if the occasion doesn’t get the better of them, the sheer speed, fluency and tenacity of the midfield should overwhelm their United counterparts – who lack their most crucial member in Scott McTominay.

To overwhelm the visitors’ midfield, to win the 50-50s and maintain pressure on the United goal, would force Solskjaer’s side into the pinned-back position that defined the final 30 minutes of the game in October. To do so from kick-off would isolate Martial up front, starving United of the chance to counter-attack down the wings and ensuring they stay locked in a psychologically exhausting defensive battle.

If that happens, Liverpool win easily. Injuries to Naby Keita and James Milner mean Klopp is relying on Alex Oxlade-Chamberlain to fill a high-energy role. Much rests on his off-the-ball performance.

5) Can Mata provide the spark United have been missing without Pogba?
It goes without saying it will take a near-perfect performance for United to take a point from Anfield, and even then they appear to lack the creativity needed to trouble Van Dijk and Joe Gomez – or at least they did before Juan Mata’s excellent performance in the 4-0 win over Norwich last weekend. The Spaniard produced two outstanding crosses for the first and third United, before coolly scoring the winner against Wolves in the FA Cup with a dink over John Ruddy.

In both games Mata started on the right wing, and if selected to play in the hole in United’s 3-4-1-2 will probably again pop up on that flank. Liverpool looked most vulnerable there in the 1-0 victory at Tottenham. Serge Aurier and Lucas Moura caused a few problems, and Jose Mourinho’s team continued to lean in that direction for a frantic final ten minutes. It’s only the slightest of chinks in Liverpool’s armour, but it would make sense for Solskjaer to get Mata on the ball as often as possible.