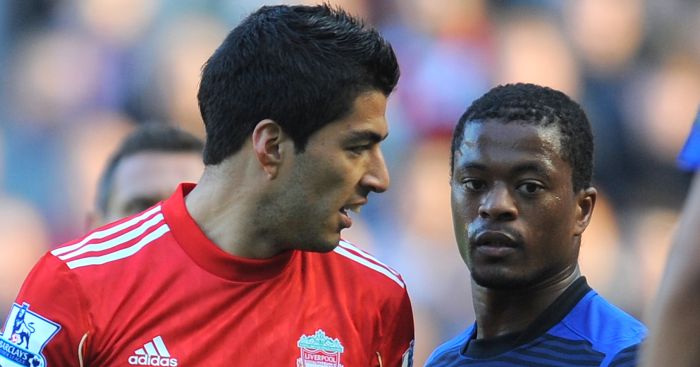 Patrice Evra has revealed that Liverpool sent him a personal apology for the racist abuse he was subjected to from Luis Suarez.

The Uruguayan was banned for eight games following Liverpool’s clash with Manchester United in 2011.

After the punishment was handed out by the FA, Reds players warmed up wearing shirts backing their suspended teammate.

Evra explained in a recent heartfelt conversation with Jamie Carragher, one of the players backing Suarez with a shirt, how the stance hurt him for many years and how he had never received an apology from the Merseyside club.

But ahead of the Reds meeting with the Red Devils on Sunday afternoon, Evra opened up on how Liverpool sent a letter to him days after the broadcast to say sorry.

“I was really touched about it,” Evra said on Sky Sports. “He told me he hoped it wasn’t too late as the incident happened nine years ago.

“He got in contact about three days after the show and it was like thank you very much this letter is really touching my heart but I was really disappointed for such a long time about a big club like Liverpool supporting a cause like that.

“Now I can see real honest people working for this club and I now have even more respect for Liverpool because they are fighting against a problem for the human race.

“I was really pleased but I said ‘I still hope you don’t win the league!’ three months ago.

“It was really important for me and even though we have a big rivalry between us but it showed Liverpool is a top class club.”