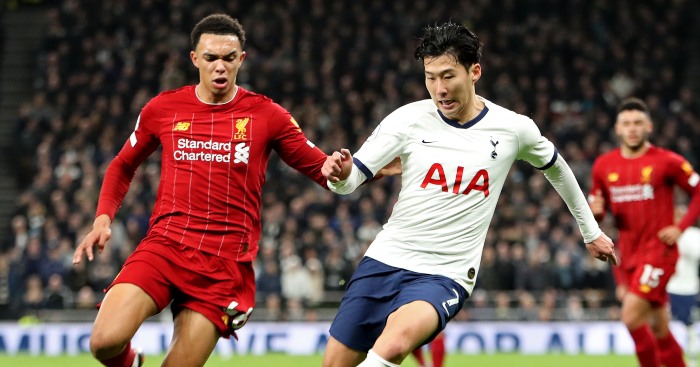 Liverpool v Spurs is probably going to be 0-0 but we live in hope. And we have five tactical questions:

1) Does Liverpool’s waning press offer Ndombele the chance to dominate?
We all know the general tactical pattern of this game: Liverpool will hold most of the ball, probing desperately for gaps as Tottenham Hotspur sit in a neatly compressed midblock, waiting for chances to counter-attack. That’s the basis upon which this preview is written, because no matter the team selections or in-game action, it is inconceivable Jose Mourinho will open up at Anfield.

And why would he? Fulham’s 1-1 draw with Liverpool at the weekend further exposed the problem with Jurgen Klopp’s system at the moment as injuries pile up and fatigue sets in. Liverpool’s press has diminished significantly, which is giving opponents time in midfield to get their head up and pick out a pass in behind Liverpool’s high defensive line.

Tanguy Ndombele ought to enjoy this kind of game. His ability to wriggle out of tight spaces, evading waves of pressure to break the opposition lines and launch the counter-attack, is becoming an increasingly important weapon for Mourinho’s Spurs. At Anfield, a weakened Liverpool midfield – with a waning press – provides Ndombele with a chance to be the game’s most effective player.

2) Will Kane and Son movement expose Fabinho again?
If Ndombele is successful, the next big problem for Liverpool is how to cope with Harry Kane dropping off into the number ten space and Heung-Min Son spinning in behind. It’s a partnership that continues to bear fruit, and again we only need to go back to Liverpool’s draw with Fulham to see why Kane and Son could be effective.

Fabinho looked a bit lost at times, hit with through balls into Ademola Lookman and Ivan Cavaleiro that exposed his lack of pace and marginal positional errors in key transitional moments. It is easy to imagine the Brazilian getting caught in two minds as Kane drops, especially if there are gaps in the Liverpool midfield, as there were in the Fulham and Brighton draws. Liverpool just aren’t as compressed between the lines this season.

Son is unplayable at the moment and will, of course, look to slip into gaps behind advancing full-backs Trent Alexander-Arnold and Andrew Robertson. Put simply, Liverpool’s high line and makeshift centre-back partnership makes them vulnerable to quick breaks – and nobody is better at quick breaks than the dove-tailing Kane and Son.

Wouldn’t surprise me at all if Klopp plays either Phillips or Williams at centre back on Wednesday because he wants Fabinho in midfield to track Kane dropping deep.

I’m pretty sure Matip was taken off as a precaution on Sunday to make sure he’s fit for this game.

3) Can Salah and Mane overcome Mourinho’s back six?
Klopp’s side may hold as much as 75% possession as they pass the ball back and forth across midfield, waiting for gaps to open that allow their front three to find space in the penalty area. Unfortunately for the hosts, the areas in which Mohamed Salah, Roberto Firmino and Sadio Mane like to play will be largely shut down on Wednesday.

Mourinho has taken to adapting his big-game back six this season. Instead of dropping the wingers into the line to become full-backs, making the full-backs auxiliary centre-backs, he has instructed Moussa Sissoko and Pierre-Emile Hojbjerg to fill the gaps. This allows Son and Stephen Bergwijn to stay higher, helping Spurs counter, but more importantly it means there are two highly intelligent defensive blockers tracking every opposition run.

It is fascinating to watch how Sissoko and Hojbjerg perform this role, suddenly dropping from central midfield to centre-back in key moments – as the opposition make runs into the penalty area. The Spurs pair will find themselves stuck in a back six for long stretches at Anfield, since that position will correspond exactly with where Salah and Mane attempt to find space.

4) Is this the day for Liverpool’s full-backs to return to form?
Assuming Salah and Mane will be largely neutralised by Sissoko and Hojbjerg, Alexander-Arnold and Robertson may play a particularly important role in this one. Both players have been slightly less effective this season, reflecting Liverpool’s overall downturn in speed and incision – and its knock-on effect on territory.

Liverpool can’t pin teams back as frequently this year because of the issues around pressing and fatigue, and in more balanced games – in which the two formations are more evenly tessellating and intertwining – there are fewer opportunities for the full-backs to arrive into space. In years gone by, it is by pushing the opponent into their own third that Liverpool have been able to provide Robertson and Alexander-Arnold with room to cross 25 yards out.

This season, they are regularly blocked by the opposition winger confronting them higher up the pitch. As Wednesday’s game wears on, it is possible Spurs will drop deeper and deeper – as they did against Crystal Palace – which could give Robertson and Alexander-Arnold space to recreate the patterns of 2019/20.

5) Or is this going to be just another tedious 0-0?
This has been a pretty optimistic tactical preview of a game that, if we’re being honest, is unlikely to see much of anything. At the beginning of a desperately busy Christmas schedule, both managers will be keen to conserve energy and will be very happy with a point – especially as they are currently joint top of the Premier League table.

Kane and Son might counter at speed, but more likely Liverpool will hold a slightly deeper defensive line and keep the visitors at arms’ length. Robertson and Alexander-Arnold might whip in dangerous crosses, but even if they do Tottenham’s powerful centre-backs hold an advantage in the penalty area.

Mourinho is back to his best, and unfortunately that means Tottenham’s ‘Big Six’ clashes will continue to be achingly dull. A 0-0 beckons.