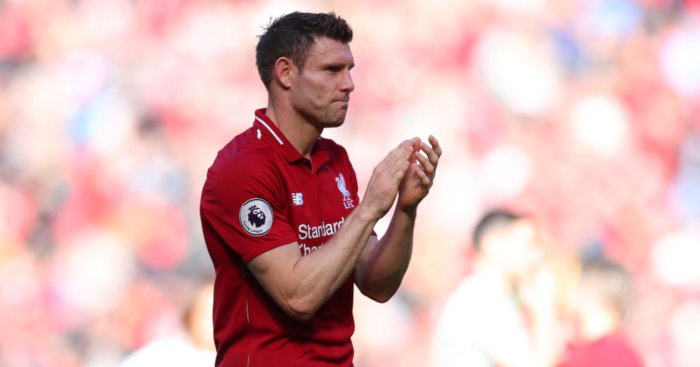 Liverpool star James Milner has admitted that it would be “amazing in so many different ways” to return to Leeds United.

Milner was sold by Leeds in 2004, during a time in which the Yorkshire club were facing financial problems, but four different clubs and 15-years later the midfielder still has hopes of playing for his hometown team once again.

The 33-year-old is in the final year of his contract with Liverpool but is relaxed about how talks are progressing over a new deal with Jurgen Klopp’s men.

This has led to rumours that if Leeds secured promotion to the Premier League this season, then Milner would return to Elland Road next summer.

And the midfielder admitted it is something he gets asked a lot, as reported in the Daily Express.

“I get asked this all the time,” Milner said in his new book, ‘Ask a Footballer: My Guide to Kicking a Ball About’.

Any while Milner thinks it would be “amazing in so many different ways” to return to Leeds, he is fully aware that the decision is not just his own.

“There would be so many things to weigh up – not just for myself or my family, but for Leeds,” Milner continued.

“If I was being released by another club, would they want me? It would be pointless for them and for me if I wasn’t needed at the time and it was just some kind of nostalgia trip.

“You can probably tell from what I’m saying that I love the club, but I also love playing for Liverpool and I want to play at the highest level for as long as I can.

“If my time at Liverpool came to an end and I was going to go somewhere else and Leeds were one of the clubs that were interested in me, then that would be a very exciting option for all the reasons I mention.”

Over the course of his career Milner has won multiple trophies, including the Champions League and two Premier League titles, but he revealed he still follows the progress of his old club.

“When I see the atmosphere at Elland Road and I hear the crowd, it makes me proud,” he added.

“The fan relationship changes when you’re a professional player and you move on to different clubs, but I still follow them and look out for their scores every weekend.

“Watching ‘Take Us Home’, you get a real feeling for how desperate everyone is for the club to get back to the Premier League, where it belongs.

“To go back and play for my hometown club again would be amazing in so many different ways.”