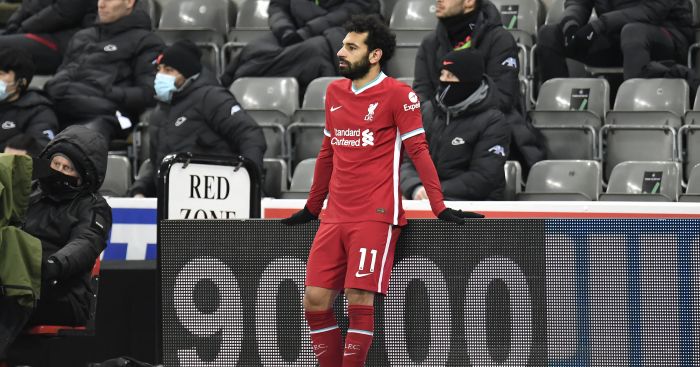 Despite the Premier League’s weirdly proud proclamation that they refuse to even entertain the possibility that playing a full uninterrupted season on Covid Island might not be practical, the rona still just about remains the likeliest thing to derail Liverpool’s pursuit of a second straight title.

But only just. On the one hand, Jurgen Klopp’s side are now unbeaten in 12 Premier League games. On the other, they’ve drawn four of the last seven, against Brighton, Fulham, West Brom and now Newcastle. It’s happening a bit too often now, and a three-point lead over Manchester United – who have a game in hand and travel to Anfield in a couple of weeks – looks suddenly fragile even if the rest of the ‘chasing’ ‘pack’ are busy tripping over themselves or are Aston Villa. That late Marcus Rashford winner against Wolves looks even bigger now.

The worry for Liverpool really is that actually, for the most part, they played quite well. Not at their best, no, but certainly better than against Brighton and Fulham. Yet when an early goal didn’t materialise there was a slight yet perceptible dropping of heads. A sense of “here we go again”. Another one of those nights. It’s amazing how quickly the self-fulfilling expectation that you’ll win a game can disappear. And, conversely, how quickly opponents who might previously have felt beaten before the game even kicked off develop the confidence they can get something out of the game.

On another night, any one of Mo Salah, Roberto Firmino or Sadio Mane could have been the matchwinner. But so too could Callum Wilson.

Liverpool, inevitably, will be the focus of attention but Newcastle really were excellent. There was luck at times, of course, but it was well deserved. Winty already has half an eye on turning this into a Karl Darlow fansite, and that dream is a little closer now. He was astonishingly good again – importantly so with Martin Dubravka back on the bench – with a string of fine saves. A fingertip effort to keep Salah out in the first half was the pick of a lengthy highlight reel.

But nor was this one-way traffic. Wilson has made a huge difference to Newcastle and put in an absolute beast of a shift up front. A number-nine performance worthy of this stadium and this shirt full of clever hold-up play and tireless running. Joelinton played his part too, winning free-kicks and providing respite for his defenders. Newcastle had only 27% of the ball, but were only out-shot by 11 attempts to eight. There would have been no injustice had they snaffled a late winner.

No PL team this season can reach 100 points. Nature is healing.

There is, obviously, no need for any panic on Merseyside. They are still three points clear. They do still appear to be the best team in the country. They still look to be built on more solid foundations than any of their rivals. They can soon sign the defensive cover they desperately require.

But the attack is not quite firing, at least not consistently. They still have the days when it all falls into place – Wolves, Leicester and Palace can all vouch for that – but the days when it doesn’t happen are becoming far more common.

Liverpool, clearly, do not go into 2021 with the same dominance, confidence or aura as they entered 2020 with a 13-point lead and the title all but won. Like the rest of us, they are wearier and just altogether less chipper.

You look around the rest of this division and still can’t shake the idea that Liverpool really ought to win this title with a fair bit to spare. But stranger things have happened, and after the year we’ve all just endured that should mean more than ever as we enter the unknowable unpredictability – whatever the Premier League may insist – of 2021.