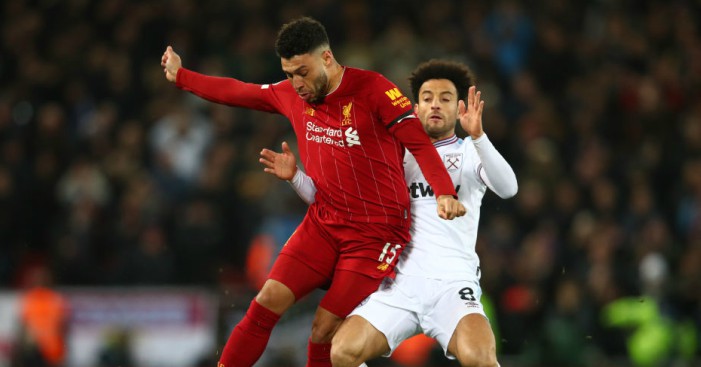 Maybe Liverpool were aware that their charge to the Premier League title was becoming something of a procession. In response, they made their home game against West Ham much more entertaining than it perhaps should have been.

The visitors came into the game having not won in seven games. Three points for Liverpool was a given, and the gap at the top was already back to 22 points in the minds of many before kick-off, but for 57 minutes of this match, that certainly wasn’t the case.

For that hour or so, Jurgen Klopp’s side were convincingly playing the part of a team which wasn’t 19 points clear at the top of the league. For the rest, they played their natural role. European champions. World champions. Premier League champions in waiting.

All eyes were on how they would bounce back from their Champions League defeat to Atlético Madrid in midweek. It was only their third defeat of the season, with others coming against an Atlético-esque Napoli side back in September, and against Aston Villa in the League Cup where they put out an U23 side.

How does a team for whom losing is an alien concept react to losing? On this evidence, by looking slightly baffled for 57 minutes.

Well that was the time Alex Oxlade-Chamberlain replaced Naby Keita.

Keita had darted around midfield in flashes, trading passes with whoever wanted to deal, and in this Liverpool team he has no shortage of offers. At other times the Guinean’s lack of drive and urgency was a problem.

Shortly after the second West Ham goal, Jurgen Klopp barked at Keita to shift up the pitch. When he didn’t, the German’s assistant Pepijn Lijnders tried to encourage him to do the same. When he didn’t again, he was replaced by Oxlade-Chamberlain.

The Englishman didn’t look as neat and tidy as Keita – more traction engine than tiki-taka – but this was what Liverpool needed.

Alex Oxlade-Chamberlain has changed the game since his introduction.

It provided the spark for a comeback which saw Klopp’s side add a bit of interest to this Monday Night Football showcase.

The ball looked to be going out for a corner shortly before Georginio Wijnaldum opened the scoring. An intricate bit of play between Keita, Mohamed Salah, Keita again, and Roberto Firmino saw Aaron Cresswell block the latter’s shot, and Trent Alexander-Arnold looked like he would shield the ball out, ready to collect and take the set-piece. Just before it crossed the whitewash he whipped in a cross and Wijnaldum was on hand to head home. West Ham may have switched off for a split second expecting the ball to go out of play, and it cost them.

Liverpool did the same shortly after when Joe Gomez, tasked with marking the tallest man on the pitch, Issa Diop, was unable to get to grips with the Frenchman or rise high enough to stop him. Alisson stooped to palm the header away but it was almost past him by the time he got down to it. Sticking out a leg may have been more effective, but who is to tell the best goalkeeper in the world what he should have done.

“Can we play you every week,” sang the West Ham fans, whose section of the Anfield Road stand had been packed with banners protesting against their owners prior to kick-off.

Liverpool needed a goal to kick-start their involvement in this game but the Hammers struck the first blow in the second half. Declan Rice put the ball into an area, any area, and substitute Pablo Fornals just happened to be in that area to give the visitors the lead.

It was something for those West Ham fans to celebrate, but they were almost in a state of disbelief for the 15 minutes or so they were ahead, almost like this situation wasn’t for them.

Anfield had been fairly subdued up until that point. At 2-2 they were louder than they had been at 1-0 ahead. 1-0 was expected, 2-1 was certainly wasn’t, so at 2-2 they rose from their slumber in an attempt to drive the team on. The fans were in the stands what Oxlade-Chamberlain had been on the pitch.

The substitute provided the impetus, but it was the usual suspects, assisted by the usual suspects, who gave Liverpool the win. Salah’s shot from Andy Robertson’s pass squirmed through Lukasz Fabianski’s legs, before Alexander-Arnold set up Sadio Mane.

It was a return to familiarity on the pitch and on the score-sheet. West Ham once again revelled in their role as underdogs, though, and immediately looked to spoil the party for a second time. Michail Antonio’s touch failed him when presented with a golden opportunity to restore parity, and a couple of late scrambles meant those heading for the exits early hung on in the stairwells.

But Liverpool eventually secured the win that was expected of them. They re-took that 22 point lead at the top of the table as predicted before the game, and Mane and Salah bagged a goal apiece, no doubt pleasing many Fantasy Football players who had targeted this game for a handy points haul.

Looking at the scoreline on paper this appeared to be just another Liverpool win in a season full of them, but they made a game of it, and credit to West Ham and their fans – who displayed their banner until well after the final whistle – for playing their part.