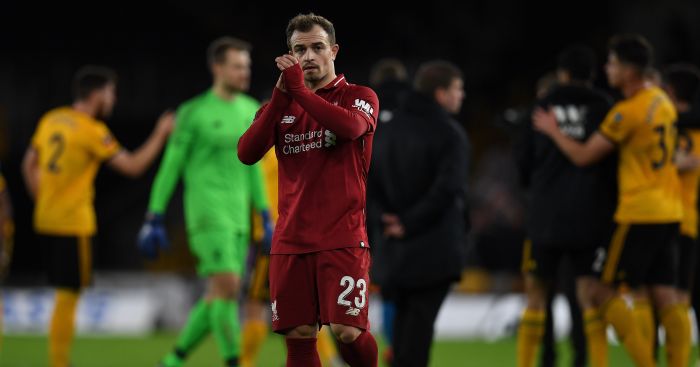 Liverpool will think about selling winger Xherdan Shaqiri this summer if they receive an offer that meets their demands this summer, according to reports.

Shaqiri became Liverpool’s latest brilliant buy from a relegated club when he joined from Stoke last summer for £12million.

The Swiss international started off the season well and he has scored six goals and assisted two in just 11 Premier League starts this term.

However, he has struggled to find a place in Jurgen Klopp’s side over the last few months with an embarrassing ‘pubic’ injury holding him back.

He did start in Liverpool’s unbelievable Champions League comeback against Barcelona earlier this month – but a report in Goal claims Shaqiri could be on his way out this summer.

The report claims that Shaqiri ‘appears to be out of step with what Klopp demands tactically’ and that ‘a good offer would convince Liverpool to do business for the Swiss’.

The same report reckons that Villarreal’s Samuel Chukwueze ‘could fit the bill for a long-term signing’ especially if they were to sell Shaqiri and look to replace him.