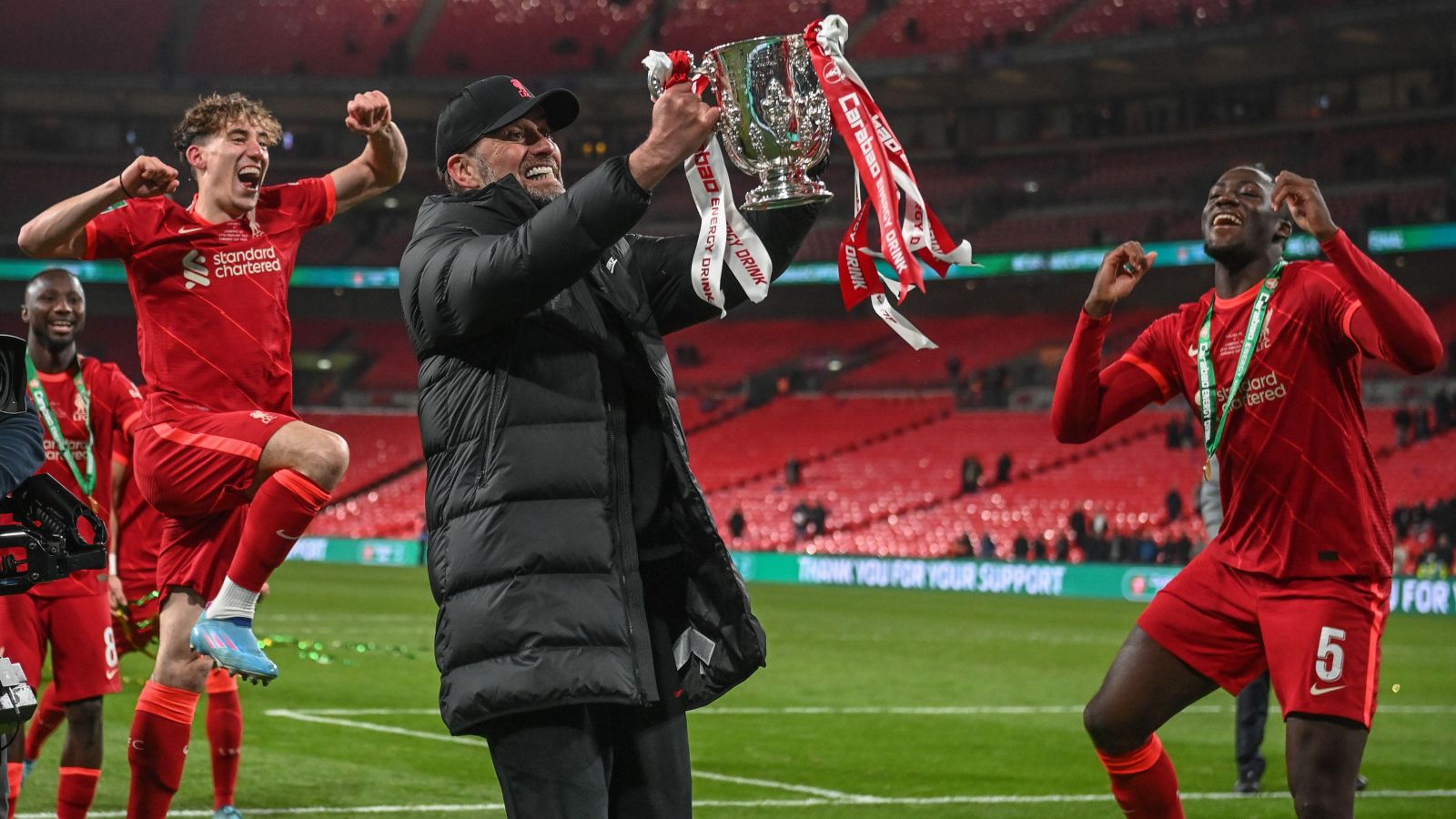 There’s a Manchester United fan in the Mailbox who wants Liverpool to win the Quadruple. Plus, Champions League changes, war analogies, greatest ever signings and more…

“History is great but it’s only to remember”
I am a Man United supporter and I am desperately hoping that Liverpool does the quadruple. Heresy? Perhaps, but I feel the only way for this club to move forward, and kill off the nostalgia/banter club we have become, once and for all, is for Liverpool to do that unthinkable feat.

We’ve already reached a playing low point, and a Liverpool quadruple would represent an organisational nadir as well. Sometimes you have to hit rock bottom…

The quadruple would be the mirror that this club needs. Ferguson, the Treble, and 2008–amazing times, but that is the past.

This is from Jurgen Klopp’s first interview as Liverpool manager in 2015:

This is both eerily familiar, and prescient.

So, come on Liverpool, you might just be doing us a favor.
Keegs, Singapore (Ok, maybe just do the Treble then.)

Champions League changes…
On the subject of Ian King’s article, my first point would be that one legged semi finals would be turgid affairs with neither team wanting to lose much more than either wanting to win. So a football take to begin with.

I knew as soon as the anger at something the majority didn’t really understand, died down, and UEFA started to do as they please, people would think “hold on, maybe that Super League thing was better” for the masses, because it absolutely was. Bin off the big 6 (from this country and the big X from others) and all the money, and suddenly you’ve got a much fairer system and sport.

I’ve always said that UEFA weren’t angry purely because it was happening, they were angry because they weren’t profiting from it. They wish they’d got there first.

I’d bet that the majority of UEFA officials don’t even watch football unless they’re told to go to a game, they’re too busy lobbying for more corrupt funds.

They’ve never made a single decision that benefitted fans and they never will. I wouldn’t he surprised if they joined Russia in killing innocent Ukrainians if they were offered a fiver.

The main anger is that I think the fight is done, and we lost.

I think we’re well past the point where football can be saved, it’s now the equivalent of a futuristic dystopian city in a sci-fi movie.

I was reading Ian King’s article about the new proposed plans, and have to say I actually agree with this plan for the last stages of the Champions League. I should point out I hate the new plan for the group stages, but this is good. I love the Champions League, the latter stages are played when summer is starting so it’s nice weather, and it adds some excitement and build-up to it to have it that way.

I think there are more cities than the ‘handful’ claimed and the good thing with all those cities is that they are all in different countries: Lisbon, Paris, Madrid, Barcelona, London, Berlin, Milan, Rome and many others could feasibly host it. Dublin, Amsterdam, Istanbul, Athens, Vienna, Turin, Manchester could host it. The part about it maybe being hooligans is extremely drab; that’s like saying there shouldn’t be a World Cup or Euros or Afcon for the same reason. Or like saying you shouldn’t go outside because you might get hit by a car. Obviously there would need to be a extra planning, but a lot of money would go into the economy of these cities too. Even if United weren’t in the latter stages (doubt they will be for a while) it would be a great football experience to go, and I’m sure you’d see just general football fans willing to go to Lisbon for a week if they could get tickets for a match or two.

It could also give a third-place match, which is great because it’s usually between two great teams. Also don’t know what the problem is with the two-legs of knockout games, I think it’s brilliant that they have home and away. When it’s like that you can have comebacks like Liverpool or Roma to Barca, or Villareal beating Juve away, or finely poised games like City going to Madrid but only with a one goal advantage. I think the difference to domestic cups being one-legged is that those teams usually play each other at least twice in the league season anyway, you’re just getting the cup version. In Europe, teams can go years or decades without being drawn against each other again, playing twice is much better. And if they are one-legged, then I’m assuming they’d all have to be played at neutral venues? So that would mean players, fans and teams don’t get to experience other stadiums. So no Anfield for a European knockout night again? No Bernabeu or Dortmund except for the group? That’s also a little drab.

I disagree with a lot on Uefa, but this is good.
James, Galway

I remember hearing about his signing and thinking, ‘we just don’t sign players like him’. I didn’t truly believe it until I saw him pull on the red and white and even then he looked like a prize stallion surrounded by mules.

Sure, the other players had won the last European silverware Arsenal have managed to bring home, but Dennis, well, everything about him was different.

He didn’t drink 10 pints on a Tuesday. He actually cared about nutrition before Wenger even arrived and he caressed the ball like his feet were hands.

I’ve been talking nonsense about Arsenal for years – from mailing the F365 mailbox to talking to complete strangers about what Arsenal should or should not be doing. But the one player I never shouted advice to from the stands such as ‘hit it long’ or ‘Paddy’s open’ was Dennis and that’s because whatever he decided to do with the ball was always way better than I could have ever imagined.

There is no better example of this talent than that goal against Newcastle.

In the last season at Highbury it was almost impossible to get tickets and my last match at the old ground was a Champions League (remember that?) game against FC Thun. Dennis scored a late winner and I vowed I would never return to Highbury again as I wanted my last memory of the place to be Dennis working his magic.

Adams is Mr Arsenal. Henry scored the most goals. Rocky is my favourite Arsenal player of all time but our greatest signing? It’s Dennis every time.
Graham Simons, Gooner, Norf London

War
With regards to the match last night between Man Utd and Chelsea. Look, I love Roy Keane’s punditry, we all do, it’s must watch tele and often hilarious.

But can we please stop this ‘this is war’ nonsense, it’s not just Keane who uses the war analogy, how many times over the years have we heard the sentence ‘you’d want him next to you in the trenches’ after a defender (invariably an English player) has made a ‘vigorous’ challenge on an opponent. As if the ability to tackle and / or clench your fist and simultaneously shout at someone on a football pitch automatically converts into you being a fighting machine on a battlefield. It’s not war, it’s just a game, if you lose it might be disappointing and lead to angry calls to TalkSport but no one is going, or should ever, lose their life because of a football match.
Pardeep

It’s equivalent to suggesting that there is conscious or subconscious racial bias from Premier League referees. Is this possilble, yes. Is it likely? I don’t think so.
Does football have problems with racism? Yes, without a doubt. All the time any fan, coach, official or player experiences abuse, yes, we have a problem.
Are there racist referees? Yes, and there are grassroots referees who struggle to deal with diversity and inclusion.
Does refereeing overall in the UK face problems with racism, diversity and inclusion? Yes, and there is a lack of diversity in UK refereeing, especially noticeable in the professional leagues.

If you look around the world at refereeing you will find incredible diversity and a group built, trained, managed and promoted on principles of diversity and inclusion. You just can’t referee to a high level without being fair, the whole profession is built on it. Dean, Atkinson, Mariner, these people are absolute heroes. Think about the abuse they put up with. The OP is suggesting there is racial bias in their decision-making. No. You are barking up the wrong tree. Absolutely not. And for that Minty, you are off the Xmas card list.

I’ll ask Minty a question back: What is your role in promoting diversity and inclusion in refereeing – do you think stigmatising, accusing and abusing referees in the media and on the terraces will help improve diversity for future generations?
Anon. (LFC grassroots ref who thinks Salah is strong, stays on his feet, is so quick and dangerous in and around the box that defenders are very, very careful not to foul him – also that LFC want to keep playing, so when there is a minor holding foul on Mo while he has his back to goal, refs just let them keep the ball and get on with it)