Home Mediawatch Could Liverpool win title ON THE MOON? 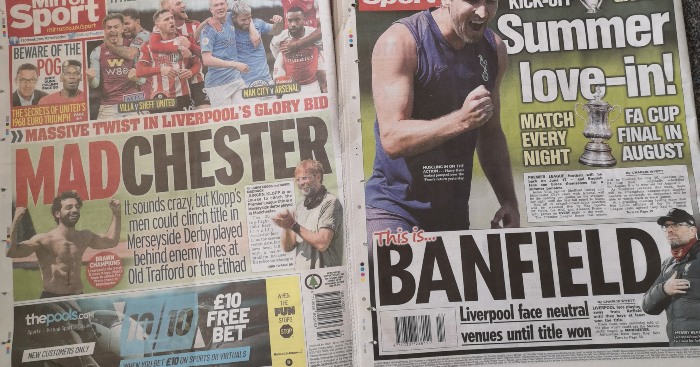 Liverpool win title in Manchester!? Except they won’t…so why not the moon?

What a difference a month of lockdown makes
Dave Kidd, The Sun, April 30: ‘While digesting weeks of coverage about the Premier League’s plans to resume the season, behind closed doors, in June, one train of thought keeps recurring. Isn’t it all just pie in the sky? Aren’t we going to look back on all this when the coronavirus crisis is over and realise it was all based on desperate, hopeless, optimism?’

Dave Kidd, The Sun, May 29: ‘AND then there was light. After months of darkness – true, pitch blackness, far beyond the realms of football’s glorious trivialities – we have a return date for the Premier League.’

Dave Kidd, The Sun, April 30: ‘We cannot ignore that many of the public, especially those with no great interest in sport, would resent football being made a special case, taking up a significant chunk of scarce testing capacity. Or that many people simply find it repugnant to even consider playing football — that most important of unimportant things — when hundreds are still dying each day.’

Dave Kidd, The Sun, May 29: ‘What is life without a little light relief? And what could lighten the mood more than this beautiful, trivial, game?’

Dave Kidd, The Sun, April 30: ‘Neither should we ignore the fact that many match-going fans couldn’t care less whether football returns if they are locked out. For them, match day is a series of glorious, much-missed rituals. Being there is everything, watching on the box would be little consolation.’

Dave Kidd, The Sun, May 29: ‘The joy of going to the match is likely to remain on hold for at least the rest of this calendar year. But the opportunity to tune in to watch – and indeed to gorge on ten live Premier League matches for the following few weekends, with kick-off times staggered to satisfy the game’s TV paymasters – will show us that normality is gradually returning after this miserable spring.’

Somebody worked out his newspaper needs football…even if hundreds of people are still dying each day.

DAMNchester
The ludicrous idea that the Merseyside derby could be played in Manchester was too enticing not to feature on the back pages, with The Sun rolling out the CAPITALS and the bold lettering with their claim that ‘Prem clubs were yesterday told of the plan which could see the Mersey derby staged in MANCHESTER‘.

‘MADCHESTER’ is the headline on the back page of the Daily Mirror, who claim that ‘It sounds crazy, but Klopp’s men could clinch title in Merseyside Derby played behind enemy lines at Old Trafford or the Etihad’.

It did indeed sound crazy. Not because Liverpool and Manchester are rival cities – or because Goodison Park is clearly also ‘behind enemy lines’ – but because Liverpool is so damned close to Manchester. There would be literally nothing stopping fans making a very short journey to congregate there instead, where they might well find fans of Manchester United or City to ‘celebrate’ alongside.

Carlo Ancelotti-sized eyebrows were raised by a whole lot of coulds in the reporting of this story, with the Daily Mail instead going for ‘probably to a ground in Manchester’ in one story on page 78 to them ‘understanding’ that the ‘Premier League are considering playing the match in Manchester rather than at Goodison’ in another story on page 78.

The baton was of course picked up online, with the Daily Star reporting that ‘Police want Merseyside derby in Manchester to stop Liverpool winning title at Anfield’. Does anybody want to tell them that the Merseyside derby was actually scheduled for Goodison Park?

All of this and we cannot help but suspect that the game being played in Manchester was only ever a possibility because nobody actually ruled it out.

Until Ian Herbert got the actual story for the Mail on Friday morning as he wrote quite unequivocally that ‘there is no possibility of Jurgen Klopp and Carlo Ancelotti’s sides meeting in Manchester’.

Is it worth spreading the word that the Merseyside derby could be played on THE MOON as nobody has yet ruled it out?

The exception
That MailOnline scoop by Ian Herbert lists these six games as those likely to be moved to a neutral venue:

So quite why this is the slug…

…is something of a mystery that may well be only answered by the letters S, E and O.

Hold your horses
Martin Samuel writes in the Daily Mail:

‘Ultimately, football got it right. It didn’t curtail, it didn’t panic, it didn’t crush dreams or thwart ambition. It waited. It ignored the calls for action, the demands to do something, anything.

‘The first question of crisis management is always: what happens if we do nothing? Sometimes nothing is better than something.’

And perhaps that is advice that some other people should follow before getting their bloomers in a twist with nonsense about a weighted-PPG plan (that was never going to happen) just because it would send West Ham down.

For Fox sake
So if the season cannot be finished, Premier League clubs have agreed on a points-per-game system which is basically the only sensible way to decide such things.

Or, if you are looking for local clicks:

And indeed where everyone else finishes.

Carl Worswick on Bobby Moore and the bracelet