Home Mailbox Liverpool without Firmino are an ordinary top-four team 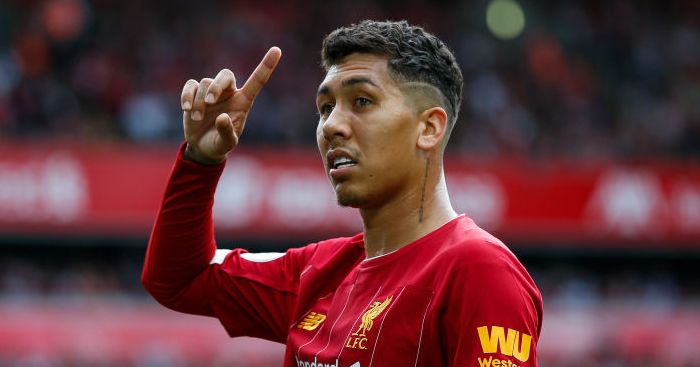 Mind the gap
It’s our yea *is shot by a sniper*
Dan, Plastic LFC

Anfailed
Confused after the incident in Saturday’s game, and many others that have proceeded it over the last two years, I checked Law 14 of football.  It all now makes sense. A little known 2016 amendment states a penalty will not be awarded to the home team at Anfield under any circumstances.
Rob

For me, yes
First things first, i absolutely detest Liverpool, i hate their club, their logo, their fans, their players, their manager. Just the kind of hate you develop while supporting Manchester United. All in a friendly banterish purely sporting way though. Over the last couple of years, its been a real piss off to see their players do so well, and while Salah, Mane & VVD have gotten all the plaudits, many people still wonder whats the point of firmino. So lets me explain.

What i think has happened, is Firmino has created an entirely new position for a striker. Lets call it a defensive striker (Let me know if anyone has a better name). He has excelled at Liverpool, and i can assure you that without him Liverpool would merely be a top 4 team. You cannot count his contributions in the goals he scores, but have to actually see him play to see that he does the role so much justice. He is selfless, plays cheeky passes and almost always has a hand in the goals scored. He has been of immense value for Liverpool & Klopp.

Watch the match against Newcastle, he came on and changed the game. Mane & Salah were not that good till he way one, and once he was on, it all clicked together. Delicious pass for Mane and then that backheel for Salah. His link up play is amazing.

He defends from the front, leads the line in turning possession and is always around the ball. He is like a little terrier, reminds me of Herrera but with more attacking prowess and intellect.

I absolutely hate his guts, and if i see one more “No look bobby” goal or tweet, i may lose it. But you cannot help but hatefully admire his game sense and defensive skills in the final third.
Aman

United front
Can we play the two remaining unbeaten sides next? Starting with the one with the 💯% record? Thx
Mzeiya, Nairobi Kenya

Sterling effort
Uh-oh.  It looks like the Johnny Nic Kiss of Death has struck again. His lavish praise for Sam Kerr was followed up by her missing a penalty as Australia crashed out of the Women’s World Cup (don’t you just love a loudmouth sportsperson blowing it when it matters?) . Now Raheem Sterling, the subject of his most recent article, was nowhere to be seen as Manchester City slumped to a defeat against Norwich City.

I’m not sure if Johnny Nic follows the Northern Ireland Premiership but it’d be great if he could write a fawning article over a Linfield player just to put the kiss of death on them.
Matthew, Belfast

A hot neutral take
I’m a Gooner and I can’t stand all smug Liverpool fans but they have the best team in the League. They were better than Citeh last season but somehow came second.

Former players
Which former player do you feel could improve your team?
My pick for the top six would be:

Man City – Yaya Toure
Kompany would be the 2nd choice but feel Yaya gives something a little different in midfield.

Liverpool – Xabi Alonso
A difficult team to improve, but could do with that all-rounder in the midfield to tie it all together, feel Xabi gives some more defensive stability than Gerrard.

Chelsea – Petr Cech (pre head injury)
I initially had Drogba but after Abraham’s hat trick I’ll leave him up front and rather replace the sieve in goals. 2nd choice would probably be Marcel Desailly to shore up the defence.

Spurs – Paul Gascoigne
Maybe more out of nostalgia than anything else but would love to see him running in the current midfield.

Arsenal – Sol Campbell
Tempted to say Vieira but I think their need is more in defence, Sol was immense.

Man U – Roy Keane
They need a sh!thouse to solidify that midfield and call some people out when they’re not pulling their weight.
Ed B

Sound, m8
It’s time to talk about one of the biggest problems affecting our beautiful game… The quality of the sound mixing on BBC football broadcasts. What do I mean? Well if you watch a game on Sky Sports or BT, whether it’s live or highlights, you get immersive sound where I imagine they place microphones around the stadium to pick up the atmosphere from the crowds and it really adds to the experience when watching the game on TV. But if you watch that same game on BBC be it highlights or live, it sounds like they have instead used a phone, placed it in a building next door to the stadium, and set it to record sound. Meanwhile the commentary is still of a decent sound quality.

It really grinds my gears when the commentators say there’s a great atmosphere but all the BBC sound engineers will let me hear is a faint murmur in the distance. Has anyone else noticed this? Does anyone care? Am I alone?
Chris, Barnet