Home F365 Says Liverpool, Wolves and a 1-0 that did not resemble the last 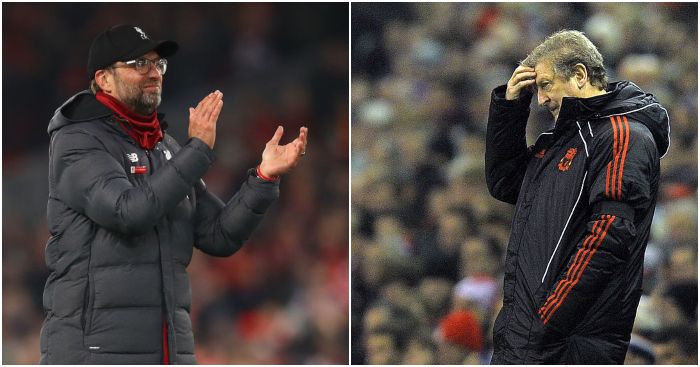 “We did have a good spell a while back but it seems a far and distant memory now.”

With those words following Liverpool’s meeting with Wolves nine years ago today, their manager in the year which began this decade added another line to his Anfield elegy. Each new stanza demonstrates he was far from the right man from the job.

Hodgson has proven his coaching credentials on several occasions at other clubs, but he and Liverpool were not compatible, to put it mildly.

For the version of Liverpool which will see out the decade and the manager currently at the helm, the complete opposite is true. They proved this again with a victory against Nuno Espirito Santo’s side at Anfield, where Sadio Mane sent them 13 points clear with a game in hand on the chasing pack.

They have now won 17 straight home league games, won 27 of their last 28 overall, and are unbeaten in 36 league games home and away.

On that day back in 2010 there were ironic chants from the Kop of “Hodgson for England” — a team Liverpool fans don’t care much for, and after the game the manager aimed a dig at the fans in response. “Ever since I came here the famous Anfield support hasn’t really been there.”

But who can blame them? That was Liverpool’s worst start to a season since 1953/54 – the year they were last relegated – and Hodgson’s words after that game, when Liverpool were stuck in the bottom half of the table and had been as low as 19th, spoke of good football being a far and distant memory.

In Jurgen Klopp, Liverpool have somehow found a manager who gets the club to the same levels of legendary managers and players of the 1970s and 1980s. It doesn’t matter that he is German rather than British; Liverpool is an international club and city as demonstrated by their disregard for the England national team. If anything, it is even more fitting that Klopp is not from these isles.

Though he knew the club was right for him, the extent to which he fits the Liverpool ethos has surprised even Klopp himself.

“When the call came in autumn 2015, I felt we were perfect for each other,” he said after signing a new contract earlier this month. “If anything, now I feel I underestimated that.”

It was a 1-0 scoreline for Liverpool versus Wolves at Anfield, just as it was in 2010, but this time it was the home side who claimed the three points. “Now you’re gonna believe us, we’re champions of the world,” sang the Kop on this occasion, in reference to their recent Club World Cup win, and in stark contrast to those bleak days a year into this decade.

There were glimpses here of the football which has made Liverpool one of the main attractions in world football over the past few years, but there were also large spells of the game which featured the ability to grind out a result which has seen them take such a big lead at the top of the Premier League.

A Virgil van Dijk long-ball knocked down by Mane into the path of Mohamed Salah would have been added to the list of near-perfect goals Liverpool have scored under Klopp, but the Egyptian’s well-hit volley was straight at Rui Patricio.

Along with his burgeoning replica Joe Gomez, Van Dijk was majestic at the back, as elegant as he is strong, and often the original source of an attacking move.

Some sloppiness crept in, but Liverpool don’t mind that as it usually allows for more counter-pressing opportunities, which is when this side can be at their most dangerous.

They were struggling to play through midfield but unlike some possession-based sides, they are more than happy to bypass it. Another long pass from Van Dijk set up the goal. Adam Lallana used a combination of chest and shoulder to play the ball into the path of Mane who swept home. The goal was given after a VAR check to make sure the ball hadn’t touched Lallana’s arm.

The move involved Liverpool’s two standout players of 2019, but it was the invention of bit-part player Lallana which created the goal. Even someone who looked like they might be on their way out of the club in the summer is playing a part, and that’s testament to the mentality instilled in the squad by Klopp, his staff, and Liverpool’s numerous dressing-room leaders.

Pedro Neto thought he had equalised for the visitors, celebrating wildly – and fairly aggressively – in front of the Liverpool fans. The Portuguese tried to rile as many of them as he could before his goal was eventually ruled out by VAR for offside against Jonny. Another passionate celebration undone by the video referee.

Liverpool settled into the game, and perhaps did so too much. A momentary lapse of concentration from Van Dijk saw Diogo Jota steal the ball and bear down on goal, but his powerful effort was saved by Alisson: the best goalkeeper in the world bailing out the best centre-back. “Now you’re gonna believe us, we’re champions of the world,” sang the Kop again. There is a theme here.

Liverpool saw out the game, defending stoutly in front of the Anfield Road end before Anthony Taylor blew his whistle.

“It was a sad way to end 2010 and a sad way to play the first game for a few weeks in front of our own supporters when we were anxious to show them we could climb the table,” bemoaned Hodgson nine years ago.

‘This is the Premier League and our ambition is to be the most successful team in it,’ wrote Klopp in his pre-match programme notes.

Now it’s impossible for Liverpool to climb the table; they sit atop it by quite some distance.