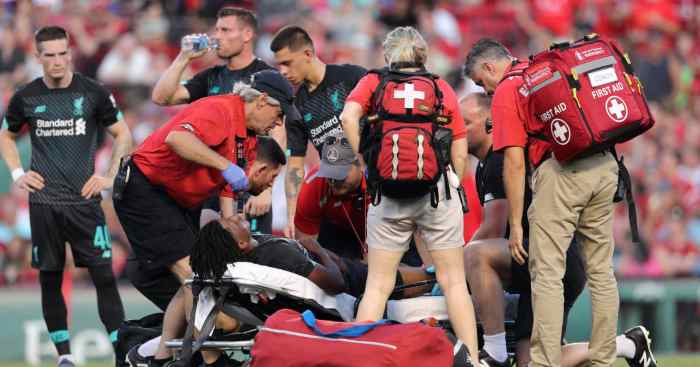 Yasser Larouci was carried off the pitch in a stretcher following a nasty challenge as Liverpool fell 2-1 to Sevilla during their pre-season friendly in Boston.

Jurgen Klopp later said it appeared Larouci had been “lucky” not to have suffered a more serious injury after he was forced off the field in the 80th minute.

“It looks like he was lucky,” Klopp told reporters at his post-match press conference.

“Of course, how it always is with these things we have to wait a little bit.”

Joris Gnagnon was immediately shown a red card for the kick to Larouci’s leg while the scores were level at 1-1.

Asked for specifics on Larouci’s injury, Klopp added: “He hit him full throttle and, in that moment, [if it was] a little bit different position where he hit him then it’s done. He rolls… he is a sports boy so that was OK, nothing happened there.

“I don’t know 100 per cent. It looks like he was lucky but I only spoke quickly to the doc and that’s what he said, but we have to see.”

After the match, Gnagnon apologised for the “odious” tackle.

“It was an odious act on my part. Whatever the reason, it’s not what should be seen on a football pitch.

“All my prayers are with the player and his family.”

Nolito put the Spanish side ahead in the 38th minute of the match at Fenway Park before Divock Origi cancelled it out two minutes before the break with a finish from close range.

Sevilla clinched the win in the final minute as Alejandro Pozo scored into an empty net.