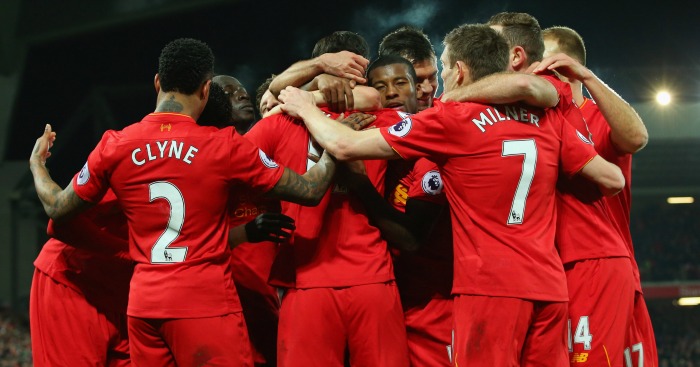 Like tyre pressure, smoke alarms and eyesight, it’s good to test your resilience occasionally. Liverpool had not conceded the first goal in a home league game all season, but responded in style to Jonathan Walters’ early goal. December may have brought setbacks against Bournemouth and West Ham, but this was evidence that they were jabs rather than knockout blows. As the year draws to a close, Liverpool are still the closest title challengers to Chelsea. This is a title race during which mistakes are at a premium. A year ago Leicester were two points clear with 38 points from 18 games; this season that would be enough for fourth place.

Previous Liverpool teams may have wilted after that opening 20 minutes. Stoke may never have won at Anfield in the top flight, but Mark Hughes’ team began the game with an effervescence that we have to come to expect from the home side. Walters and Peter Crouch may be a slightly agricultural strike force, but they were damn effective too. Erik Pieters, now used in a left wing-back role, crossed for Walters to give Stoke the lead.

Simon Mignolet’s one-handed push into his own goal demonstrated that dropping Loris Karius has not eliminated Liverpool’s goalkeeping problems. The Belgian subsequently saved expertly from Joe Allen, desperate to make amends for his Liverpool failure as Anfield fretted and feared. Even by half-time, any concern over potential slip-up had been put to the back of joy-filled minds, as Liverpool produced an emphatic answer to their early question. After 30 minutes both sides had attempted four shots; by full-time that statistic read 20-6 in Liverpool’s favour.

There is an assumption that Liverpool’s unreliable defending caused the end of Brendan Rodgers’ tenure, but the reality is that his attack had become just as ineffective. Liverpool scored 13 goals in Rodgers’ last 14 league games in charge, and six of those were against teams who would be relegated that season.

This is where Jurgen Klopp has engendered the biggest improvement. The defensive flaws remain, but Liverpool’s attack is among the most vibrant in European football. Barcelona, Real Madrid, Paris St Germain, Chelsea, Arsenal, Manchester United, Manchester City, Juventus, Bayern Munich; none have scored as many league goals as Liverpool this season. The fine folk at Opta tweeted that Liverpool have scored 85 league goals in 2016, their most in a calendar year since 1989.

In achieving this attacking cohesion, Klopp has channelled his countryman Felix Mendehlsson, who said that the essence of the beautiful is in unity of variety. Liverpool’s front six contains tacklers, passers, stamina, speed, strength and skill, and if one characteristic doesn’t get you, another will. The anticipation and touch around the penalty area is wonderful to watch. Even those in reserve are more able than starters of years past. By 75 minutes, you found it difficult not to sympathise with Stoke, a punch-drunk boxer waiting for the final bell.

When Klopp’s team attack on the counter you feel as if a goal is more likely than not. Every turnover of possession provokes the team into action as if the collective are controlled by one force. The replacement of the injured Philippe Coutinho with Divock Origi has caused a slight dip, but not enough to hamper progress. Sadio Mane’s departure to the Africa Cup of Nations is the next test.

Yet even such a magnificent collective has star individuals. Adam Lallana has more goals and assists than any other Premier League midfielder this season, and scored the equaliser. Roberto Firmino is the club’s top league scorer in 2016, and scored his 16th of the calendar year – his goal drought of six games and headlines of Christmas Eve debauchery were put to one side. In James Milner, Klopp has produced one of the Premier League’s most effective left-backs. Milner is behind only Christian Eriksen and Dimitri Payet for Premier League assists this year.

The postscript to such effusive praise is that nothing is achieved in December, and Klopp will be keen to stamp out any sparks of complacency before they scorch a mark in the dressing-room floor. Yet, for now, there could only be cheer on the faces of those streaming out of Anfield. When Manchester City arrive on New Year’s Eve, they will do so not as daunting opponents, but equals. That is the Jurgen Klopp effect, in action.