Home F365 Says Liverpool’s ‘humility’ is pulling them towards greatness… 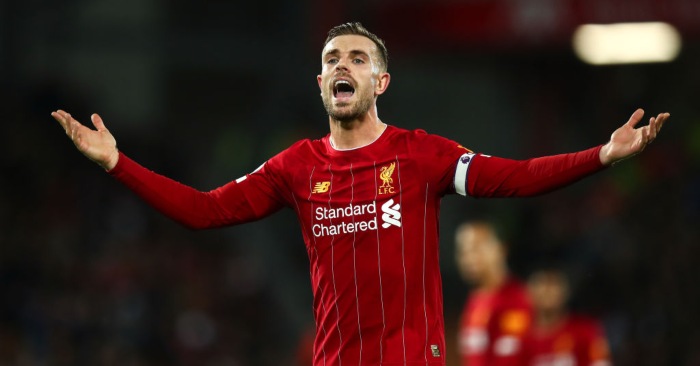 Chris Wilder was annoyed. He was speaking after his side’s unusually meek 2-0 defeat at Anfield on Thursday night and his tetchiness suggested that his Sheffield United players were in for a quiet journey home.

“They won every first ball, every second ball, ran forward and back. They had the humility to do that as world champions.”

It was Wilder saying ‘look, that’s how a top team behaves – you’re never too good to work’. It was a touch harsh, because his players have been running their balls off for months now and, given the ridiculousness of the Christmas schedule, a flaccid performance had been in the post. But he was trying to create a useful reference point for his players and that incidentally led to the heart of what has made this Liverpool so successful.

‘Humility’ is on football’s banned list of descriptive words. It’s too intangible and woolly. Along with ‘effort’ and ‘energy’ and ‘character’, it’s been redacted in favour of more dispassionate analysis, often involving clever-sounding words in foreign languages.

The trouble with that, though, is that Liverpool are a very sensory football team. They may be built on an advanced premise and technically impressive players, but they provoke something other than cold admiration. When they click through their gears on the counter-attack and players flare off in every direction, the response isn’t just to purse the lips and note the literal mechanics of the transition. Instead, it’s to marvel at how eager those players are to be at the end of one of those moves. How much distance they’re willing to cover – at top speed – to sustain them.

The real appreciation actually comes from recognising how exhausting it all looks; that’s what allows those who watch Liverpool to feel their work on the pitch.

It also embodies the humility Wilder speaks of. In this instance he was using it to flog his own players, but what he recognises is that even now, with the European Cup won and the Premier League pretty much in the bag, Liverpool have a respect for the game’s absolute basics. Not passing and moving and defensive discipline, but all the primary imperatives – the hard work which allows all that other stuff to matter.

Which is interesting, because hard work is a dirty term. Or, at least, it’s the sort of imprecise description used by pundits to describe teams they haven’t actually watched. When Burnley win 1-0 and show up fifth on Match of The Day, what is it that they’re presumed to have done well? They worked hard. They most likely did, but that’s not the point. It’s just a blanket term. It can’t be disproven because no side wins without working hard.

Within that assumption lies one of football’s more compelling truisms. Through the precedents established over the years, it’s known that miniscule drops in application and focus can be disproportionately costly. If players are focused on an important cup match in the future, for instance, their league form often suffers. Conversely, when a new head coach takes charge of a side, a squad’s need to impress him can translate to dramatic improvement – not because of new tactics or a different reading of analytical data, but rather because the group’s focus is suddenly so much sharper and its willingness to run further and jump higher has been temporarily increased.

Money buys players and used in the right way it can create a tremendous advantage, but the final margins are breached by clubs with the healthiest internal environments and by teams with the highest emotional standards.

Liverpool will presumably win the Premier League towards the middle of April and that will be the proper time for their accolades. But Thursday’s win over Sheffield United allowed them to complete a calendar year unbeaten in the Premier League and that, of course, is worth tribute in itself. Particularly because of the way in which that sequence has been maintained. Think of them, perhaps, as a piano which never goes out of tune, or a tennis racket with perfect string tension. Jurgen Klopp has kept Liverpool’s pitch for a very long time and in spite of some significant obstacles. Not least their own success, which can be a debilitating elixir.

And he’s had to be vigilant because – actually – drained of its energy, his team can be quite mundane. Individually, they have impressive components upon whom they can lean – Virgil van Dijk, Sadio Mane, Trent Alexander-Arnold, Mohamed Salah and the rest – but their talent alone doesn’t provide an overwhelming advantage. Certainly not over a side like Manchester City and not in a way which would allow them just to scythe through the fixture list.

What creates that, instead, is this humility: the willingness to keep running and to keep playing with the same intensity. That is what causes opponents to crack and creates the weakness in their outer shell. It’s also Klopp’s most alluring achievement – because it’s so scarce. Having ideas about how the game should be played is easy. Every coach with a whistle and a set of training cones has a philosophy and an impressive-sounding list of influences. But bringing that vision to life and then holding it at its apex is a different sort of challenge.

But it’s been cleared. The substance of this success has been to stop the minds from dulling and, somehow, keep the legs from becoming heavy and reluctant. As a piece of man-management, it’s been remarkable.