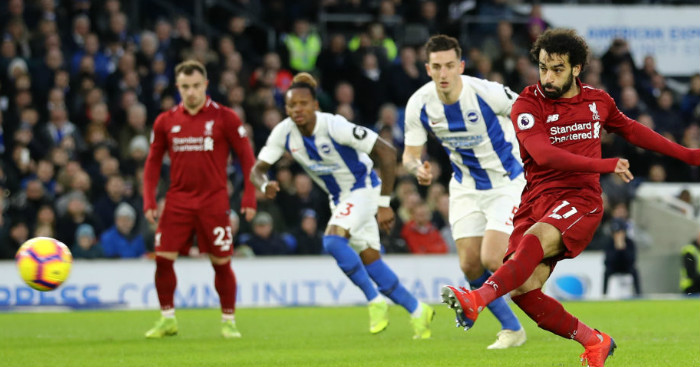 If the definition of a good performance is in the execution of a manager’s plan and the carrying out of instructions, then this was an almost-perfect Brighton showing.

Brighton’s instructions from Chris Hughton were to hold the lines, allow Liverpool to pass the ball between the back three, and starve the front four of service, breaking when they could with Jurgen Locadia as the sole runner through the middle.

Roberto Firmino and Xherdan Shaqiri looked particularly frustrated as the ball failed to make its way any further forward than Jordan Henderson or Georginio Wijnaldum, the pair selected in central midfield with Fabinho deployed as an emergency centre-back.

Liverpool’s only chance of note throughout the first half game from a Trent Alexander-Arnold cross from deep which Shaqiri nodded fractionally wide. It would have been fascinating to see how Jurgen Klopp and his players might have responded had Pascal Gross not felled Mohamed Salah inside the box to allow the Egyptian the penalty kick that settled the game.

As it was, Brighton offered little enough against the Premier League’s best defence that once Liverpool went ahead, they knew they were exceptionally unlikely to find themselves in that scenario.

One of the most impressive things about Liverpool’s unbeaten first half of the season was their ability to keep finding a way to win even in games in which they were not at their best, and in that regard, this was a reassuring result for Klopp.

If this is the start of another good league run that keeps them ahead of Manchester City, this game will simply be regarded as the first instance a bit of RPG-style grinding: the practice in video games by which players prepare for bigger battles by beating a number of more easily-defeated foes and sharpen their attributes. This may be something that Liverpool need to get used to, at least in the short term, while they aim to build back up the aura of invincibility that slipped at least slightly as a consequence of those defeats to Manchester City and Wolves.

Their next four games are all ones they would expect to win, but nonetheless not ones where you would expect a hammering. Crystal Palace showed against City that they are not to be underestimated, Leicester sit eighth with the best defensive record outside the top four (despite their 2-1 loss to Southampton), West Ham have won seven out of their last ten games, and Bournemouth, though inconsistent and unpredictable, can be dangerous when at their best.

That mid-table quartet may prove perfect preparation for their Champions League clash with Bayern and a trip to Old Trafford in the league, and it is worth remembering that Liverpool will now end this weekend having at least maintained their four-point gap over Manchester City, who will be visited by Wolves on Monday night.

But should even a couple of those games prove as frustrating for Liverpool as Brighton did here, it will force Liverpool to keep finding solutions even as their opponents continue to gather better and better information on how to hold them at bay. It is down to them to turn the current tone of uncertain, cautious optimism into one of irritatingly unfettered belief once again.