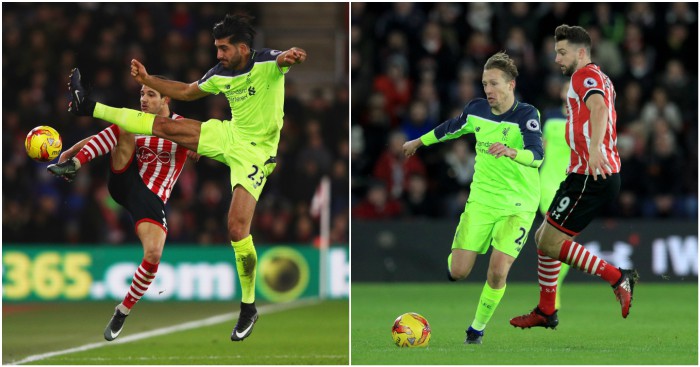 The question was whether Liverpool would cope without Philippe Coutinho and then without Sadio Mane, but the emphatic answer is that they certainly struggle without both. Jurgen Klopp’s side have now failed to win three different matches in three different competitions in the space of ten days.

“Wednesday will see the best team we can line up,” Klopp said on Tuesday after Liverpool’s youngsters stuttered to a 0-0 draw against Plymouth. The personnel may have improved, but the performance did not. This was hardly ideal preparation for Manchester United on Sunday.

“I often watch our attacking players and think wow,” said Nathaniel Clyne in October. “You have to admire it. Firmino’s touch, Coutinho jinking around, Mane taking on players, Lallana doing Cruyff turns. It’s good to watch.”

Clyne cannot have enjoyed Wednesday evening’s fare. With Coutinho restricted to a place on the bench and Mane already departed for the Africa Cup of Nations, Roberto Firmino was the only member of Liverpool’s first-choice front three available, and even he was farmed out onto the left of the forward line. Lallana was pushed into his role from last season; there’s a reason he moved.

Lallana has been Liverpool’s best player this season, his stamina on the right of a midfield three giving Clyne licence to venture forward far more than last season, but it is his attacking statistics that have been most impressive. Without him, Liverpool’s midfield looked woefully one-dimensional. I’ve been regularly told in the Mailbox exactly what it is that Georginio Wijnaldum brings to the side; I am yet to see it myself.

At least Wijnaldum was competent, which is far more than can be said of Emre Can. The German has received scathing reviews for his recent performances, but this was a new nadir. He seemed surprised that he couldn’t have five seconds on – and eight touches of – the ball without being tackled in a frantic semi-final first leg against one of the Premier League’s hardest-working teams. Having him and Lucas in the midfield of a team enjoying 67% possession is like sending two firefighters to a dropped, unlit match.

Liverpool’s first-choice midfield three (Lallana, Wijnaldum and Jordan Henderson) have created 73 chances between them in the league this season at a rate of 4.7 per 90 minutes. Against Southampton, neither Lucas nor Can created a single chance, while Wijnaldum’s two were both simple passes that led to shots from distance. Even Coutinho’s introduction on the hour offered no discernible improvement – although he has had just four training sessions with the first team after injury.

A lack of invention from midfield makes an attack far easier to thwart; Liverpool looked lost. Virgil van Dijk controlled a painfully quiet Daniel Sturridge and Ryan Bertrand babysat Lallana, leaving Maya Yoshida as the spare man. Firmino did trouble Cedric Soares and had both Liverpool’s shots on target, but that is the shiny edge of a grey cloud. Klopp’s side have averaged 6.55 shots on target per game this season and 5.81 per away game (both the highest in the league), but at St Mary’s could muster only two. Firmino’s snapshot, palmed over the bar with the score at 0-0, was the only thing to panic Fraser Forster.

If Can, Lucas and Wijnaldum offered little going forward, they hardly atoned defensively. The trio made only three tackles in a combined 241 minutes, compared to the ten made by the rejuvenated Oriol Romeu for Southampton. Even for a team dominating possession, that’s a pitiful total. Can was dispossessed four times through poor touch alone, his indecision twice leading to a Southampton counter-attack.

The only surprise, and saving grace for Liverpool, is that Southampton will only take a one-goal lead to Anfield. Nathan Redmond has never scored more than once in a club game but could easily have had three. His first-half shot was expertly saved by Loris Karius; his second-half chip came back off the crossbar.

Klopp will still be confident of progression to his third final as Liverpool manager, but is left with plenty to ponder ahead of the trip to Old Trafford. If Henderson is not fit to start, Klopp must consider making a change in midfield. A recall for James Milner in that role? Lallana moving deeper? One of Klopp’s fledglings afforded a chance?

Whatever the answer, vast improvement is needed. Envisaging Can and Lucas against Paul Pogba and Ander Herrera should be enough to cause sleepless nights across Merseyside.