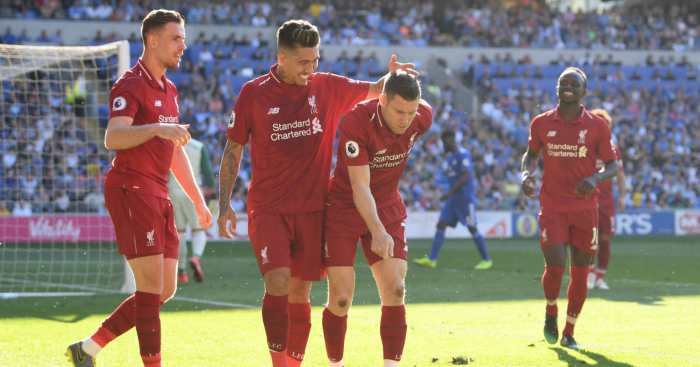 James Milner says he gets “plenty of stick” from Liverpool team-mate Virgil van Dijk over being one of the older members of Jurgen Klopp’s squad.

The former Leeds United midfielder played his first match in the Premier League back in November 2002 and 17 years later he is still plying his trade in the English top-flight.

The 33-year-old has already made 12 appearances in all competitions this campaign despite his contract expiring at the end of the season.

There has been no news of Liverpool offering him fresh terms at Anfield but there doesn’t seem to be an end in sight for his career at the top.

“To be honest I feel fine, I feel the same,” Milner told talkSPORT.

“I’m waiting for that day when we do a session and I feel it a bit harder than the boys.

“It’s always nice when I’m asking the young lads if I’m finding a hard session tough and they’re agreeing with me. I don’t know, they might be doing that just to make me feel better!

“Virgil gives me plenty of stick – that’s what one of the celebrations last season was about [his ‘old man’ celebration after scoring against Cardiff back in April].

“He’s always joking. When there’s Premiership Years or a game in black and white on the TV in the treatment room, he’ll say, ‘Milly, what number are you?’

“It’s good fun, but I feel really good at the moment. I feel no different to how I have been.

“I’ll keep working hard, keep pushing and keep contributing as long as I can.”