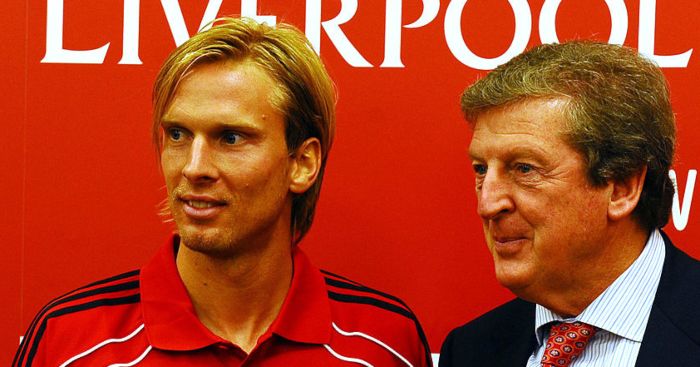 18 – Joe Gomez (£3.5m, from Charlton in 2015)
It’s safe to say Liverpool’s gamble on European champion Joe Gomez went a little better than their last substantial outlay on a British centre-half. How surprising that Danny Wilson, Scotland’s reigning Young Player of the Year at the time, wilted under the pressure of comparisons to Alan Hansen.

19 – Divock Origi (£10m, from Lille in 2014)
It’s safe to say Liverpool’s gamble on European champion Divock Origi went a little better than their previous substantial outlay on a France-based striker. How surprising that David N’Gog, hailed by Rafa Benitez as a “quality” player with “not a high price” when he joined in 2008, wilted under the pressure of being Jean-Alain Boumsong’s cousin.

20 – Lazar Markovic (£20m, from Benfica in 2014)
There are just five months left before we can no longer say Lazar Markovic was contracted to the European champions this year. Liverpool got 19 Premier League appearances for their £20m.

21 – Jordan Henderson (£16m, from Sunderland in 2011)
The last five captains to win the Champions League are Philipp Lahm, Iker Casillas, Xavi, Sergio Ramos and Jordan Henderson. Only one of those players has been offered in part-exchange for Clint Dempsey before.

26 – Virgil van Dijk (£75m, from Southampton in 2018)
This signing players at peak ages for huge money lark is simple.

28 – Robbie Keane (£19m rising to £20.3m, from Tottenham in 2008)
“I have already made my opinion clear on the nature of this transaction. I don’t regard it as a transfer deal – that is something which happens between two clubs when they both agree to trade – this is very much an enforced sale for which we have agreed a sum of £19m as compensation plus a potential further £1.3m in additional compensation.”

Taking a proper negotiation away from Daniel Levy is like confiscating a child’s toys. Liverpool were so apologetic over their conduct that they gave Keane back for £16m seven months later.

29 – Paul Ince (£4.2m, from Inter Milan in 1997)
Two years after Manchester United “accepted a bid behind my back” from Inter Milan, Paul Ince made his triumphant Premier League return at Liverpool. He had a fight with Graeme Le Saux after a constant stream of homophobic taunts, won nothing, wildly celebrated his equaliser in a 2-2 draw with United in front of the Kop because he assumed it had ended their Treble chances and was quietly shipped off to Middlesbrough in 1999.

30 – Christian Poulsen (£4.5m, from Juventus in 2010)
As Javier Mascherano’s toxic exit took hold of Anfield, Roy Hodgson found the antidote in his former Copenhagen colleague Christian Poulsen. “If you come to a club like Liverpool, you have to deliver,” the midfielder said at the time; he lost his place to Jay Spearing after the manager was sacked in January, with Évian signing him permanently that summer.

31 – Karl-Heinz Riedle (£1.8m, from Borussia Dortmund in 1997)
You would think that signing a player who just scored twice in a Champions League final victory would guarantee some sort of success. Michael Owen’s emergence meant the Germany international started just 18 Premier League games under Roy Evans.

32 – Rickie Lambert (£4.5m, from Southampton in 2014)
The most expensive beetroot factor alumnus is also Liverpool’s most expensive 32-year-old, replacing Neil McBain who joined for £990 from St Johnstone in 1928.