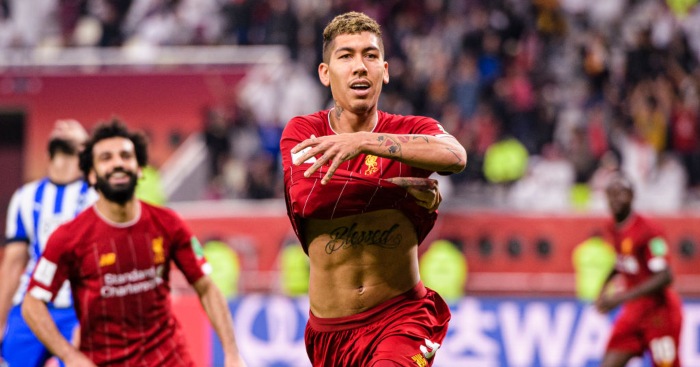 Thank you for your mails as ever. Send more to theeditor@football365.com

Five world class Liverpool players
The Liverpool game was tenser than we were thinking. Klopp clearly trying to get through the game playing as few of the first team as possible but ending with the front five. How many teams include the wing backs in the front 5?!

That Trent Alexander Arnold pass to Bobby reminds me of the first time I saw more than one world class player at liverpool. Post Istanbul when Rafa brought some class to join Gerrard. Xabi, Torres and Gerrard were doing things like they were telepathic or possessed. There was no way they had practiced some of the passes they were making.

Hopefully they all start on Saturday
Alex, South London

Obvious solutions
You cannot start the League Cup in April. What about those who get to the latter stages of the FA Cup? I think that one of the virtues of the league cup is that is DOES get out of the way early, but the problem is too many fixtures and too many injured players.

Why are we seeing so many injuries? Because teams fly around the pitch at 100 miles an hour playing the high press. That is NOT sustainable, especially with 2 cup competitions.

Those who disagree with me, and there are often many, please name another country that has 2 footballing cup competitions per season.

If we don’t act (look how long it took them to use hawkeye) then we will get stuck in this causality loop whereby you need young players to play at a high tempo all the time, whilst simultaneously burning them out and throwing them on the scrapheap after 24/25. Rinse and repeat.

It’s fine for the papers as they just want the next sensationalist headline (look at the Ancelotti rumours, it’s all about clicks) but our players are the ones who will suffer.

I don’t think we’ll ever see the likes of Bergkamp, Henry, Drogba again, certainly not on these shores, because they’ll all be sent to the knackers yard by 28, whilst the best players swan around pitches in sunny italy and spain getting waved through by “amenable” other teams.
Fat Man

Really?
Fred London clearly does not watch any Liverpool games.

Liverpool got more then they deserved against Sheff Utd,Villa and Man Utd??
Sheff Utd-Mane missed 2 absolute sitters,had a blatant penalty not given and Liverpool had most of the play and chances.
Villa-Firminio armpit offside,Mings catches the ball and no pen given and again Liverpool created more chances and had all the play.
Utd-Mane had a goal disallowed,Utd scored when Origi was fouled and Liverpool had more shots on goal and more possession.
Everton are the only team to score more than once against us(in a game we won 5-2).
We beat:
Norwich 4-1.
Arsenal 3-1.
Chelsea 2-1
Burnley 3-0
Southampton 2-1.
City 3-1.
Everton 5-2.
Norwich,Arsenal and Burnley all scored when Liverpool were well ahead, so Fred,where are these dozens of fortunate results Liverpool got??

No injuries??
Of our first choice 11:
Alisson missed the first 7 games this season
Matip has missed the last 3 months.
Fabinho is out until at least late January.
Wijnaldum is currently out.
Last season Gomez missed a big chunk of the season,Keita was very stop start and got injured against Barcelona as he was starting to flourish and we beat Barca in the second leg without Salah AND Firminio(both out injured.)
Even the 2018 CL final Salah got INJURED DURING THE GAME & Klopp had to sell Coutinho mid season.
Ferg,Cork

Fred, London will have loved that.
Howard Jones

Anyone else think of Fred, London when Bobby slipped in the winner on 90+1?!

Fred, London is just baiting right? The best goalkeeper in the world missed two months of the season and was replaced by a free-agent signed 4 days prior. The starting and 2nd choice CB are both out for the foreseeable future. The first choice DM is out. The first choice AM is out (but travelled to Qatar, so might be okay). Salah has played through an ankle strain which has coincided with poor form, probably not a coincidence. It’s almost as if by having a good backup goalkeeper, 4 decent (or better) CBs, retaining the best jack-of-all-trades and motivating your bench players, you end up with a team that can compete despite injuries.

Liverpool have often played poorly this season, but (as a fan) it has always felt throughout those games that the team can step up the pace/effort/quality when needed. The best example was against Crystal Palace. The team seemed to coast through the whole game, but when Zaha scored they turned it on until they scored and watching from home, it never felt in doubt.
Ziggy (the Watford game on the other hand… that was nailbiting throughout)

Fred’s take on Liverpool’s recent run of luck amused me.  It reminds me of Manchester United’s run of luck between 1993 and 2013.  Or perhaps it could be attributed to strong club leadership and a clearly defined strategy which includes effective recruitment of the manager and coaching staff who deliver superior man management and coaching to players who have been hand picked through diligent and careful monitoring and surveillance complemented by the integration of hungry, young and talented home grown players, who on a match day are asked to implement complicated, even transformational tactical ideas.  As always the old adage applies.  The harder I work, the luckier I get.
Mark, LFC, Hong Kong

What Fred needs to understand is the concept of luck. Getting a bad decision from the ref is unlucky. A wild deflection is unlucky. The ball striking a beach ball is unlucky. Dominating a game and failing to win is not unlucky. It means that you weren’t good enough,

If you hit the post 3 times, that means you weren’t shooting accurately enough. If their keeper is stopping everything, it’s not unlucky, that keeper deserves the clean sheet. If their defence parks the bus, and you aren’t good enough to score, it’s not unlucky. If you’re good enough, you’ll win.

As for injuries, come on Fred, you’re just clutching at straws. Alisson missed 6 weeks, Fabinho is out until January, Matip has been out for ages, Lovren is injured, AOC missed a whole season, Keita has been in and out the team. Remember last season? We played Barcelona with no Salah or Firmino and Robertson got injured during the game?

Anyway, I know that was probably a waste of time, but it’s quite cathartic to get it all out. Are Liverpool lucky? No. Their just really good.
Mike, LFC, London

Love to the Reds from a Blue Scouser
Trent Alexander-Arnold could steer a spaceship through a needle eye. What a magical player. People talk about Liverpool being lucky with refereeing decisions, injuries, opponents taking points off each other, etc., etc. Truth is: Liverpool changed their luck when they promoted TAA to the first team. Intelligent. Clinical. Leader. The boy is a born winner.
Morgana, Blue Scouser

Some No. 9 love
The top scorers of the decade threw an interesting light onto the best forwards of the decade. Will refrain from the Messi v CR7 today and instead focus on the players below them.Zlatan and Cavani have no doubt padded their numbers up by playing for PSG but for Zlatan to be on this list, have turned 30 in 2012 is insane (Yes you read that right 2012!). CR7 receives a lot of plaudits deservedly for his fitness and longevity, Zlatan too seems to be drinking from the same fountain of youth.

But coming back to the point of this mail. Suarez and Lewandowski. Only 6 goals separating them (233 and 227 respectively) both having started this decade as precociously talented 21 yr olds. To have even then maintained a scoring rate of 23 goals a year is a testament to their skill. I cannot recall seeing better or more rounded no.9’s in the 2000’s. Both of them have such an innate sense of where the goalposts are, allowing them to be such creative and deadly finishers. These two are always a joy to watch and it’s sad to realize that in a few more season they will probably retire.

Suarez especially with his movement, dribbling and quick passing is just an incredible player to watch, I would literally watch 90 mins of football where the camera is just following him.
Yash, MUFC (For anyone who hasn’t read about it, I would urge you to go read about Suarez’s life and how he met his wife. They could make a movie on it!)

A change of mood
Rather than travel to a desert, last night I spent the evening watching (not) el Classico rather than the World Club Cup (or whatever it may be called).

When I left the Nou Camp I reflected that the last time I walked the long road back into town, my mood was somewhat different. Then, having watched Liverpool lose 3-0, I was utterly disconsolate. We were seemingly out of the Champions League and very unlikely to catch City. Worse still, I shared the view of many that it would be impossible to maintain current form in the next season. The fabulous dream was over.

But it wasn’t. Reflecting back it’s increasingly astonishing what Liverpool have achieved since then. Barcelona beaten in one of the greatest European games ever, the Champions League won, topping the Champions League Group and, of course, only 2 points dropped in the league.

Whatever happens next year, the last six months have been astonishing, and beyond my wildest dreams. Roll on 2020.
Rob