Home All The News Liverpool’s title ‘in the bag’? How five other fast starters finished… 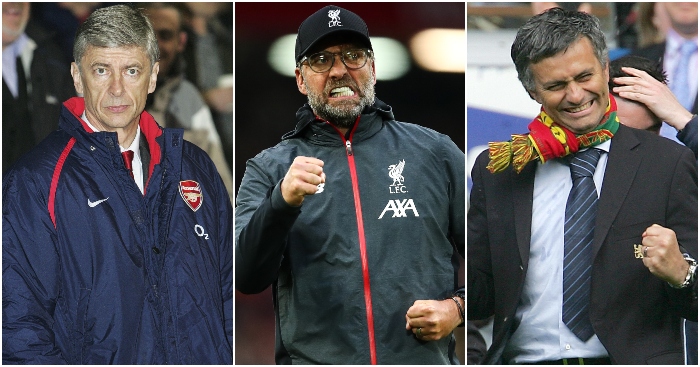 “Can you see us losing four or five games this season? Not the way we’re playing.”

Chris Kirkland reckons Liverpool have got the title ‘in the bag’. That’s that then.

Or is it? Liverpool are not the first team to fly out of the blocks at the beginning of a Premier League season. How did it turn out for five other fast starters?

Jose Mourinho’s Blues had a title to defend when they got off to a flying start in 2005. Like Liverpool, they won all of their opening eight games and though Jurgen Klopp’s side have scored two more goals by this point, Chelsea had conceded only two goals compared to the six the Reds have shipped.

Chelsea’s perfect start extended to a ninth game before they drew their 10th at Everton. Mourinho’s team suffered their first defeat in their 12th game – a 1-0 loss at Manchester United. It barely knocked Mourinho’s men out of their stride however, with Chelsea winning 17 of their 19 matches during the first of the season.

The Blues lost only two more games – at Middlesbrough and Fulham – before wrapping up the title with a 3-0 demolition of United three games from the end of the season. Their eight-point margin at the top of the table would have bene even greater had they not lost both of their last two matches.

A brilliant Joe Cole goal on the way to a title-clinching 3-0 win v Man Utd at the Bridge! 👌 pic.twitter.com/eY1Lj465g4

After a season of bedding in to the Premier League where Pep Guardiola admitted he encountered ‘problems he didn’t expect‘, Manchester City got his second term off to a flying start.

Everton held Pep’s men in their opening home game of the season, but they won every other game until New Year’s Eve when Crystal Palace became the first team to shut them out in a goalless draw. Liverpool inflicted City’s first defeat a fortnight later to ruin any ambitions of an invincible season and their second loss was felt in the Manchester derby when a victory would have clinched the title with six games to spare.

With two defeats all season, City clinched their 100th point on the final day, achieving a margin of 19 points from second-placed United. And Jose reckoned that was one of his greatest achievements.

A 2-2 draw at Fulham was the only blight on City’s record in the opening 12 matches which featured the 6-1 demolition derby at Old Trafford while Roberto Mancini’s men averaged 3.5 goals per game.

Three defeats in December and January rocked City’s title bid while another at Swansea on March 11 saw them relinquish top spot to United. Two draws and a defeat in the following four games opened the door for Sir Alex Ferguson’s side to power on to title number 20, but they suffered an even bigger dose of the jitters.

United won only three of their last six while City took maximum points from theres, culminating in the most thrilling season finale the Premier League has seen. Sergio Agueroooooooooooooooo gave City their first title in 44 years by virtue of goal difference.

Manchester City have now won the Premier League three times in seven years. This is what happened in the first of those..

RT to remind a Man United fan who won't want to see this 😩😩#AGUEROoOoOoO pic.twitter.com/9Mjf5ctnbv

Arsene Wenger’s Invincibles made a decent start to their title defence, winning eight and drawing one of their opening nine games. But while wearing ’50 not out’ undershirts, Arsenal’s unbeaten record came screeching to a halt on 49 at Old Trafford, where Ferguson’s United ran out 2-0 winners before the pizza started flying.

The fall-out from the Battle of the Buffet led to Arsenal winning only two of their next seven Premier League matches. A fortnight after losing at Old Trafford, Wenger’s men relinquished top spot and never regained it.

The Gunners finished six points clear of United but eight short of Chelsea, who ended their 50-year title drought in Jose Mourinho’s first season at the club.

Kevin Keegan’s entertainers thrilled the Toon Army at the start of their second season back in the top flight while dropping only two points from their opening eight games and four points from their fist 11 matches.

But their momentum was halted by a 2-0 defeat at Old Trafford where Keith Gillespie scored for the hosts before switching sides in January when Andy Cole made a sensational move to Man Utd.

By that point, Keegan’s men were in the midst of 13-game run during which they won only two games. Only two victories in their last nine matches saw Newcastle fail to secure even a UEFA Cup place, finishing 17 points behind champions Blackburn.