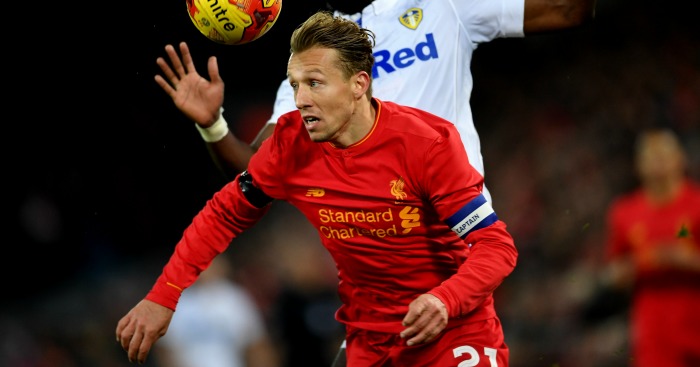 Midfielder Lucas Leiva admits Liverpool’s title challenge could keep him at the club until the end of the season but he is now seriously considering his long-term future.

The Brazilian is the longest serving player currently at the club, with his 10-year anniversary due this summer, but he has become a squad player under manager Jurgen Klopp, making just 14 appearances this season and only three Premier League starts.

Having turned 30 on Monday, Lucas knows he needs more game time but will only leave in January if he can secure a permanent deal which would virtually see him to the end of his career.

He has been the subject of a number of lucrative offers in the last three transfer windows but did not agitate to leave and ultimately made sacrifices in order to help out the club as his experience was still needed.

As a result his loyalty has been rewarded with Klopp, albeit reluctantly, accepting he should be allowed to leave should the right bid arrive in this window.

Lucas insists he does not know where he will be come February but admits the team’s title challenge – they are currently second behind Chelsea – may play some part in his decision.

“The situation is not great. It is not something I want for my future, to have not many games,” he told Press Association Sport.

“I don’t want this for my career, especially at my age. I’m not close to retiring and have many years ahead of me.

“You want to play – we get paid to play – but I just try to be professional and help as much as I can and when I have the chance do my best.

“At this moment I have to deal with this and try to find a solution when I have the chance.

“I have to be professional, think about the team and see what is going to happen.

“The best place for me to be now is Liverpool. I cannot say (where) in one week’s time, one month’s time or four months’ time.

“I have to judge when something comes up if it is better.

“It has been a special season already and we have a chance to win trophies and that is something I consider as well.”

Lucas captained a much-changed side in Sunday’s goalless FA Cup draw with Plymouth and is hopeful of more game time in Wednesday’s EFL Cup semi-final first leg at Southampton.

The Brazilian started last season’s final against Manchester City, which they lost on penalties, and has played the full 90 minutes in Liverpool’s last three outings in the competition so is hopeful of more action at St Mary’s.

“Everyone is ready to play. Especially for me, hopefully I can play as I played all the rounds until now,” he added.

“It is a competition we want to do well in as we came very close last year.

“Hopefully we can have two good games in the semi-final against a very difficult team and get to the final.”

Lucas has seen many ups and downs during his time at Anfield but believes Klopp, with whom he has an understanding about his long-term goal, has engendered a level of unity he has never experienced before.

“I think in terms of spirit it is probably the best since I’ve been here,” he said.

“We have a very good group of players, there is not one player who tries to be the main man, so it is really team-work and it is really good to work with all of them.

“It has been working really well for us at the moment and hopefully we can carry on working like that and the end of the season will be a positive one.”