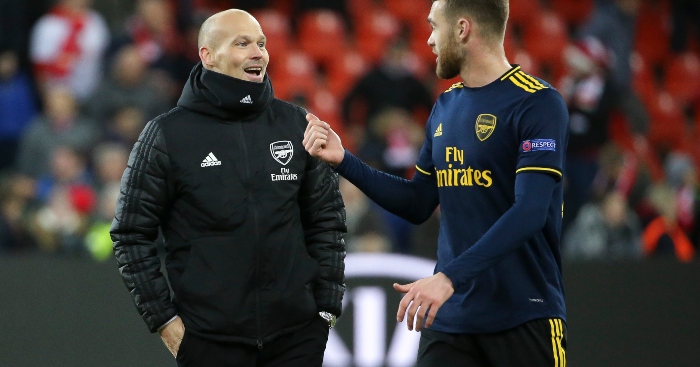 Freddie Ljungberg was pleased his team selection did not come back to haunt him as Arsenal qualified as winners of Group F following a draw at Standard Liege.

The Belgian side had held a two-goal lead over a much-changed Gunners line-up showing nine alterations from the team that won at West Ham on Monday night.

The 42-year-old admitted it was a “little gamble” to make such sweeping changes when the likes of Inter Milan and Ajax could have been laying in wait in the round of 32 if they had failed to win the group but was happy his young talent did enough.

“We started the group really well, then we had some problems in two games and then we came to this.

“We played a lot of games lately and of course I want to give the young ones a chance as I said before, but I needed to rotate as well because we got injuries in the West Ham game and I didn’t have many options left.

“And we have a game again on Sunday. Of course it was a little gamble but I believe in those young players and they pulled through and we’re top of the group.”

The two quickfire goals in the second half almost mimicked the three goals in nine minutes which were enough to seal a 3-1 victory at West Ham on Monday.

That result ended a nine-match winless streak but interim head coach Ljungberg conceded it was frustrating that his side have only been showing their true promises in glimpses.

“I believe that even in the first half against West Ham and even today we tried to have possession,” he said.

“Yes, maybe it’s a bit slow because we didn’t have the intensity sometimes but it wears the opponents down.

“Sometimes you have to just plug away, plug away in your game of football and maybe when your opponent gets a bit more tired you get that little extra metre and that’s when you score the goals.

Liege had taken a shock lead after two deflected goals from Samuel Bastien and Selim Amallah caught out the Arsenal defence.

Their efforts proved to be in vain as they drop out of the competition but coach Michel Preud’homme was happy with his side’s work.

“I think we almost played the perfect game,” he said.

“We really wanted to win, but also knew that we had to make three goals. Unfortunately, we only made two.

“I can say that I am proud of this team because of the way we played during this campaign and against Arsenal.

“Maybe we did not get that sixth consecutive home win, but we stay unbeaten.”