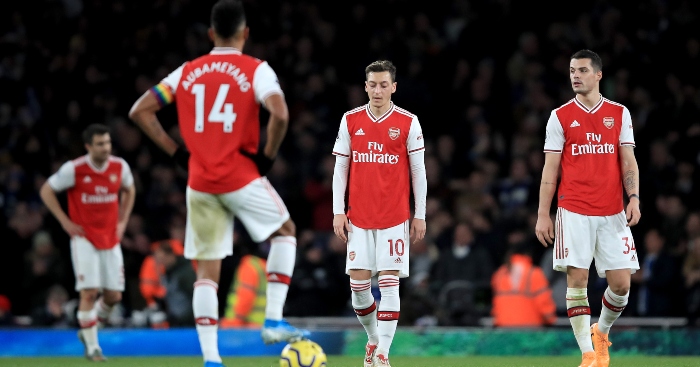 Freddie Ljungberg admitted Arsenal’s confidence is at rock bottom after they lost at home to Brighton.

The Gunners have now gone nine matches without a win, their worst run in over 42 years, with Ljungberg unable to oversee an immediate upturn in fortunes following Unai Emery’s sacking last week.

“It was tough. We didn’t show up in the first half, didn’t work hard and want to play,” admitted Ljungberg.

“The tough part is they looked very short of confidence. They were very scared to get the ball, very scared to move and they were just standing still.

“At half time we said: ‘This is not Arsenal, we have to give it a crack.’ That’s what I want to see from them.

“It’s a concern for any coach, a lack of confidence. It’s obvious that nervousness from the home crowd can affect players no matter what quality they have.

“They’re human beings like everyone. They want to do well, and they feel the pressure. We need to just dig out a win to get some confidence.”

Brighton were dominant against a limp home side and took a deserved lead from a corner, Adam Webster sweeping the ball home from Dan Burn’s knock-down and Aaron Connolly’s touch into his path.

Arsenal should have drawn level before half-time after Pierre-Emerick Aubameyang stood up an inviting cross, but Joe Willock could only head it at Mat Ryan, who had got across well to save with his feet.

It took them four minutes to equalise, Alexandre Lacazette’s flicked header from Mesut Ozil’s corner looping up and flying in off the far post as Sead Kolasinac challenged Ryan.

David Luiz had the ball in the net after an hour but he was clearly offside when he met Ozil’s free-kick and VAR chalked off the goal.

Instead Brighton secured a notable win when Aaron Mooy was given too much space down the left to swing in a cross and Maupay got ahead of Luiz to glance a header home.