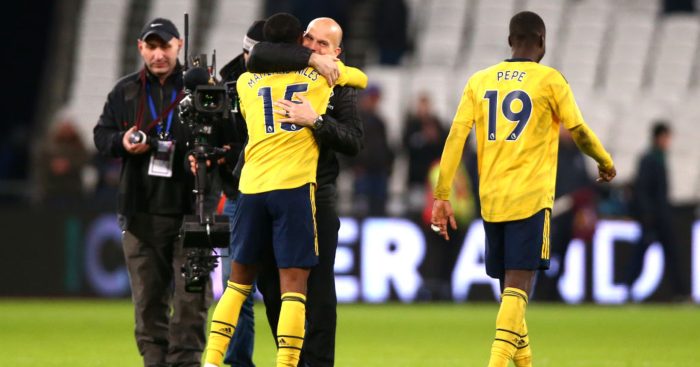 Freddie Ljungberg won his first match as Arsenal interim boss and ended the club’s nine-match winless streak in all competitions as they came from behind to beat West Ham 3-1. The result moved the Gunners into the top half of the Premier League standings and made sure that the Hammers were the first club to lose 100 Premier League London derbies.

It was the line-up most Arsenal fans have been crying out for all season. Ljungberg popped his round pegs in round holes and unleashed them on West Ham. Calum Chambers, Mesut Ozil and Pierre-Emerick Aubameyang were all played centrally, Kieran Tierney started, while goal machine Gabriel Martinelli joined Nicolas Pepe in the wide positions. A selection that would eventually be vindicated.

Ljungberg‘s preparations were hampered when Ainsley Maitland-Niles was drafted into the starting XI to replace Hector Bellerin, who was injured in the pre-match warm-up. Maitland-Niles set the tone for the first 30 minutes of action by kicking the ball out of play with his first touch after less than 30 seconds. A game of cat and mouse ensued, with neither side doing anything of note, despite the Gunners having the majority of possession.

A turning point came on 29 minutes when Arsenal’s injury woes continued; Tierney was forced to leave the pitch after colliding with Michail Antonio. The Scotsman held his shoulder as he trudged off with another spell on sidelines looming. Sead Kolasinac – who wasn’t on the bench until Bellerin’s injury – was the man to replace Tierney. From that moment on the game seemed to spark into life, with Ozil having a poor effort for Arsenal before Antonio forced a save from Bernd Leno. Not long after, Angelo Ogbonna broke the deadlock, in somewhat fortunate circumstances, his goal-bound header taking a big deflection off Maitland-Niles, foxing the Arsenal goalkeeper. It was no more than everyone watching deserved after witnessing one of the most woeful 45 minutes of football this season.

West Ham were also poor in the first half but they didn’t need to be decent, Arsenal were that bad. They looked directionless, a team bereft of confidence; this was a poor impersonation of what Arsenal used to be. You compare it to Everton’s caretaker manager bounce, albeit one game, under Duncan Ferguson, and this Gunners side looked uninspired in the first 45 minutes. Ljungberg’s slumped, lifeless body language said it all.

The second half started exactly the same, with Arsenal lacking coherence, energy and bite. And then, as if they had just popped a caffeine tablet, the game changed. Kolasinac’s cross from the left on 60 minutes was finished off by Martinelli with a clinical strike. It was a goal out of nowhere after a shambolic display from the Gunners. But the life was back in Arsenal and the confidence starting flowing through Ljungberg’s side. Nicolas Pepe made it 2-1 to Arsenal on 66 minutes with a belting effort before Aubameyang fired into the net on the turn to wrap up the game only three minutes later.

West Ham, who have now lost a Premier League-high 30 matches on a Monday night, had the stuffing knocked out of them by Arsenal’s quick-fire goals. In the space of ten minutes the pressure shifted from Ljungberg – who even after this result looks unlikely to be considered for the permanent position – to Hammers boss Manuel Pellegrini. West Ham have won one match in their last 11 and their trip to Southampton on Saturday now looks crucial for the Chilean.

The Arsenal players were the ones lapping up the applause and chucking their shirts into the away end at full-time, something which seemed incredibly unlikely on 60 minutes. It was the first time since October 2011 that the north London side had recovered from a half-time losing position to win an away match in the Premier League (5-3 Chelsea). And they will hope to use this as a springboard for their season with their next five fixtures including three home matches against Manchester City, Chelsea and Manchester United.

The teams came into the match sitting 19th and 20th in the form table over the last seven Premier League matches and fans of both clubs were looking over their shoulder rather than looking forward. On the basis of this match, and the form table, Arsenal and West Ham are both poor sides – but one team had the quality to make the difference on Monday night.