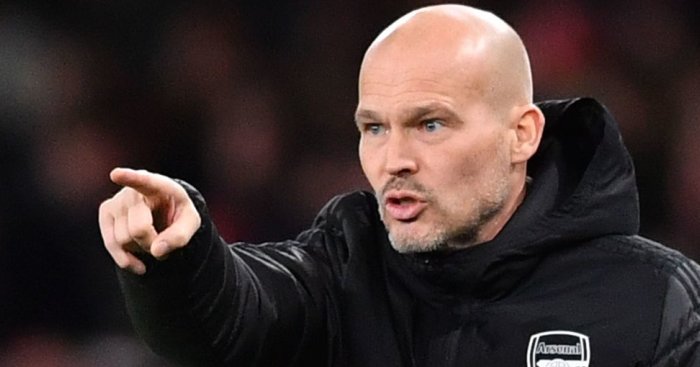 Arsenal fell to a home defeat against the champions, whose three first half goals were too much for the Gunners to bounce back from.

Ljungberg has only guided Arsenal to one win from his five games in interim charge, with the side stuck down in ninth place in the table.

And with fewer points separating them from the relegation zone than from today’s opponents, Ljungberg admitted there was a “gulf” in quality.

“It shows the quality Manchester City have in their side,” he told Sky Sports. “Kevin de Bruyne showed his quality.

“We had worked on our structure and we had five against two but they still managed to score.

“They are the champions. I was proud of our boys. When you look at the age of the side that finished it was not an old side.

“I felt we kept the ball OK and played well. But we couldn’t get that final spark and when you are 2-0 and 3-0 down early it takes the edge off.

“The players showed spirit but it is hard to play at 3-0 down.

“If you look you see the players and price tags they put in from the bench, we have young kids who we put on. There is a gulf but I am still proud of the boys.”

One of the players who was taken off for a youngster to come on was Mesut Ozil, who reacted angrily to his substitution – something Ljungberg says will be dealt with.

“I took Mesut off because I wanted some more energy in the team. How he reacts is up to him and we will deal with it later.

“I’m here on a day-to-day basis but of course we want players in the right way.”

The Swede is also keen to see a permanent successor to Unai Emery appointed quickly, revealing a plea he had made to the club hierarchy.

“I’ve said to them they need to make a decision. We are here to help and the staff are trying to chip in but a decision has to be made so we can have the same resources as other clubs. When I say that, they say that I have to wait and see.”