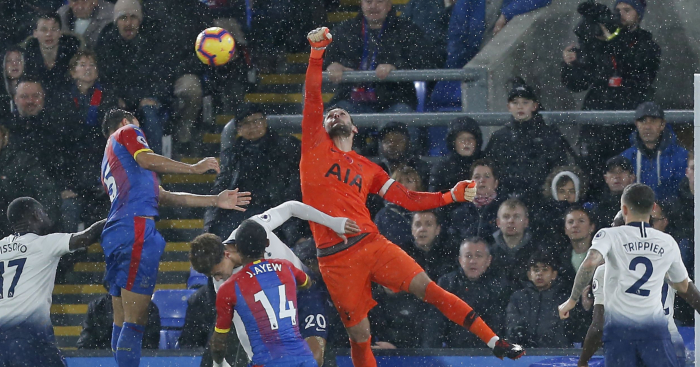 Toby Alderweireld fetched the fabric conditioner, Juan Foyth replaced the duvet cover and pillowcases, and Kieran Trippier and Serge Aurier took it in turns to stifle their laughter as Ben Davies quietly ushered his sleepy goalkeeper to the bathroom to spare him even more embarrassment. Hugo Lloris eventually did just about enough to preserve his clean sheet against Crystal Palace, but he almost made an almighty mess at Selhurst Park.

For every smart stop from Jeffrey Schlupp and Andros Townsend, there was a painful panic every time he was handed possession. For every fine stoppage-time save from Alexander Sorloth, there was an inability to deal with any and every aerial ball. A terrible first half was offset by an excellent second as Lloris showed both why Tottenham might need to replace him and why that would be so eminently difficult, all in the space of 90 minutes.

A 1-0 victory teaches us little about a Tottenham side who are managing to keep the pace with Manchester City, Liverpool and Chelsea despite tying their own shoelaces together as they stumble towards the halfway point. Nor can we learn an awful lot about a Palace team who have been equally unfathomably unable to pull away from Southampton and Cardiff after 12 games. But this was an education in how to encapsulate your strengths and weaknesses all at once, as Lloris helped avert an obstacle entirely of his own creation.

By the Frenchman’s own admission, he has been “a bit shaky” recently. His baffling mistake against Barcelona was followed up with a costly red card against PSV in the Champions LEague, while Saturday’s shut-out means he has finally kept as many Premier League clean sheets as relegation-battling Martin Dubravka and Alex McCarthy this season.

Not that these are isolated issues. His mistake on the biggest stage during the World Cup final was symptomatic of a goalkeeper whose very game relies on a high-risk approach with the finest of margins. Lloris falling off such a tightrope is not a rare occurrence, but it is becoming far more common.

Petr Cech was the only player to make more errors leading directly to goals last season, as Lloris’s air of invincibility was slowly and ever so slightly pierced. Yet not even a drink-driving charge could harm his position under Mauricio Pochettino. If anything, it strengthened it, as the manager insisted on standing by his troubled captain.

Rather depressingly, breaking the actual law would never be enough for Lloris to lose his place, but under-performing on the pitch would be. The clamour for previous third choice Paulo Gazzaniga to replace him permanently was unavoidable by half-time at Selhurst Park, justifiable or otherwise.

Which is what makes his subsequent renaissance ever the more impressive. Tottenham did not concede in the first half in spite of Lloris, but kept Palace out in the second because of him. For the first time this season, he displayed the requisite skills needed to be a captain, and the mental strength needed to bounce back.

It will not be enough to dispel the idea that Tottenham should contemplate replacing him – at least not yet. Lloris is 31, the outlier when compared to the first-choice goalkeepers at Arsenal (26), Chelsea (24), Liverpool (26), Manchester City (25) and Manchester United (28). He is the last remaining member of the old guard among the Big Six, four of whom have recognised the increasing importance of keepers and spent vast amounts on the position since last summer. The other, United, benefited from foresight and currently possess one of the best in the world.

But this performance did as much to plant the seed that Tottenham have outgrown Lloris as it did to prove they still need him. For the first time, there are legitimate questions as to whether the Frenchman should be part of the club’s long-term future. It is his duty to answer them emphatically.

If you enjoyed this, feel free to give us and our very own John Nicholson some love in the FSF awards. Head here to vote…