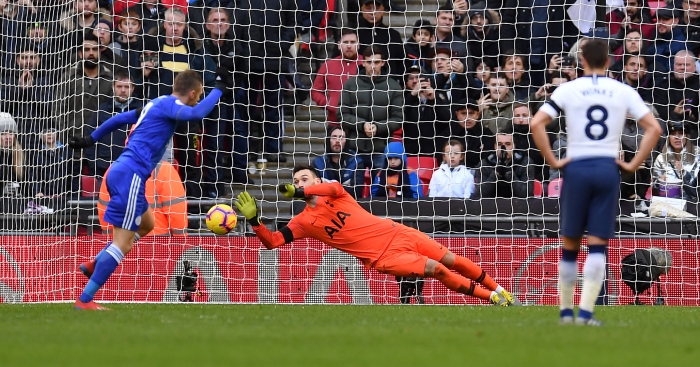 Hugo Lloris saved Tottenham against Leicester, but the captain knows he will not be able to repeat the feat if his side defend the same against Borussia Dortmund in the Champions League on Wednesday.

The France international kept out Jamie Vardy’s penalty, which was the striker’s first touch of the game, and made a number of other important stops as Spurs won 3-1 at Wembley.

Although the scoreline suggests an easy win for Mauricio Pochettino, Leicester were well in the game and had 20 shots at goal.

Lloris was able to bail his side out, but the prospect of conceding so many chances against the Bundesliga leaders in the first leg of their last-16 Champions League tie worries him.

“Leicester played in a fantastic way and I think we won the game thanks to our spirit and character,” Lloris said. “Without that, we could not win this game.

“I think we need to improve the team performance. We won but against a bigger side we couldn’t have won that type of game. It’s up to us.

“Against a bigger side it would be even more difficult to win. It’s the way you manage the season too, though. Sometimes you deserve to win, like the game against Man United, and you lost.

“Leicester deserved better but we won. This is the league. It’s a long way and without spirit and character, it’s difficult.

“The mentality is great in the changing room and we showed that again on a difficult day.”

It could have been a different story at Wembley had Lloris not saved Vardy’s penalty midway through the second half.

The Foxes were preparing to bring on the former England striker when James Maddison was fouled in the box and at the break of play the substitution was made, with Vardy going straight over to take the spot-kick.

But Lloris guessed the right way from Vardy’ first kick of the match.

“Yes (I am surprised), because his first touch is a penalty,” the Frenchman added. “At the same time, he’s a great player so it’s not a problem for him.

“You need a bit of luck and it helped us to keep believing and then we scored the second goal.

“It was a good moment for me and the team because at that moment if we conceded a goal the game would have changed completely.”

Attention now turns to the Champions League visit of Dortmund on Wednesday, where Spurs face a much better team than the one they beat twice in last season’s group stage.

Lucien Favre’s team are five points ahead of Bayern Munich at the top of the table and are having a season to remember.

“They play fantastic football,” Lloris added. “They have so many fantastic players and I’m not surprised they’re top of the league in Germany.

“The manager is very good with a great idea of football. It’s going to be very, very difficult.

“We need to obviously improve the team performance, compared to today, and we need the stadium to push, to help us.

“In some days it’s difficult to deal with Wembley but hopefully in this big game we’ll receive this help from the crowd.”