Home Home Page Front Page Loan rangers: A review of each loanee at every top-six club 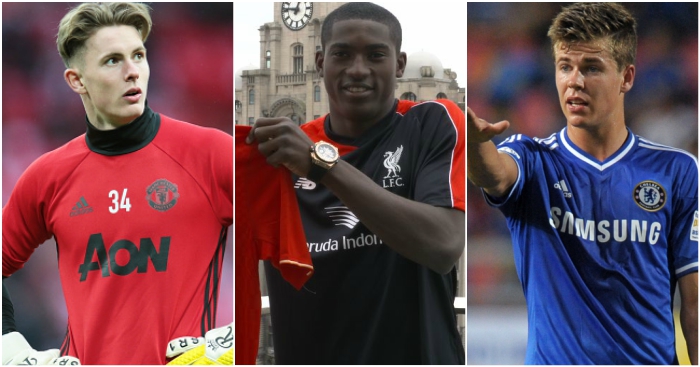 Marc Bola (Bristol Rovers): Yet to arise from the bench. He has been an unnamed substitute in each of Rovers’ first four games of the season.

Damian Martinez (Getafe): The keeper has some work to do to displace Vicente Guaita, who kept a clean sheet against Athletic Bilbao as Martinez watched on from the bench.

Stephy Mavididi (Preston): After not making the match-day squad for Preston’s first three Championship games, he finally broke the duck against Reading. His showing as a substitute two minutes from time will go down in folklore.

Takuma Asano (Stuttgart): The striker hit the crossbar on his Bundesliga debut in a 2-0 defeat to Hertha Berlin. The work permit is surely in the post.

Tammy Abraham (Swansea): Led the line against Manchester United, which went about as well as you would expect.

Kasey Palmer (Huddersfield): Was brought on in the 72nd minute in the victory over Newcastle; was booked in the 77th.

Todd Kane (Groningen): Better men than Todd Kane have tried and failed to dislodge Mike te Wierik from his right-back slot. Two substitute appearances thus far is all Kane has to show for his efforts.

Bradley Collins (Forest Green): The 20-year-old keeper had his teammates to thank on his third League Two appearance, with Forest Green beating Yeovil 4-3.

Ola Aina (Hull): Four outfielders have played every minute of Hull’s Championship campaign so far, which means Ola Aina featured in the 2-1 defeat to QPR on Saturday.

Ruben Loftus-Cheek continues to impress me.

That lad is the absolute business.

Marco van Ginkel (PSV): A goal! By a loan player! In fact, with his strike in the win over NAC Breda, Marco van Ginkel has scored in consecutive weeks for PSV. Show-off.

Ike Ugbo (Barnsley): The striker was a half-time substitute, and had 16 touches in 45 minutes. One of those was an off-target shot.

Jay Dasilva (Charlton): The left-back played the full 90 minutes in a 4-1 victory over Northampton. What did you do with your weekend?

Kurt Zouma (Stoke): He was brilliant, and Arsenal could not find a way past him nor his Stoke teammates. Big gold star for you.

Mason Mount (Vitesse): Of the four Chelsea players out on loan at Vitesse, three featured in their 3-1 win over Roda. Spare a thought for Mason Mount, won’t you?

Izzy Brown (Brighton): Picked up an injury on the opening day against Manchester City, so missed the defeat to Leicester. Lucky him.

Michael Hector (Hull): Four outfielders have played every minute of Hull’s Championship campaign so far, which means Michael Hector featured in the 2-1 defeat to QPR on Saturday.

Jamal Blackman (Sheffield United): Picked up his second clean sheet in four games in the 1-0 victory over Barnsley. He even made a save.

Mario Pasalic (Spartak Moscow): Creator of two chances in a pulsating 4-3 derby defeat to CSKA Moscow, but provider of no assists and scorer of no goals. He has one of each in four league appearances thus far.

Danilo Pantic (Partizan): No goals, no shots, no tackles, no chances created. Heck, Danilo Pantic didn’t even attempt a single pass, never mind complete one. Although Partizan’s game with Napredak at the weekend was postponed.

Lewis Baker (Middlesbrough): Three appearances as a second-half substitute is hardly the platform for Lewis Baker to display his talents, but he is building up match fitness. His most telling contribution in the 2-1 defeat to Nottingham Forest was an attempt to scuff up the penalty spot before Daryl Murphy took the winning spot kick. It did not work.

Fankaty Dabo (Vitesse): The one Chelsea starter of Vitesse’s four Blues loanees in the win over Roda. On the other flank was Alexander Buttner. Have fun beating those full-backs.

Pedro Chirivella (Willem II): No shots, no chances created and no tackles is not the best look for a central midfielder hoping to impress Jurgen Klopp. Utrecht eased past his Willem II.

Connor Randall (Hearts): Those of you who thought Connor Randall was a right-back might have been confused at the sight of the 21-year-old pulling the strings in central midfield as Hearts drew 0-0 with Rangers. Kaka Randall, more like.

Adam Phillips (Norwich): Adam Phillips has made two appearances for Norwich. Their Under-23s side in the Premier League 2, that is. Poor bloke.

Taiwo Awoniyi (Mouscron): After a goal on his debut, Taiwo Awoniyi decided to slightly tone down his contribution against Gent at the weekend. He assisted one goal as Mouscron came from 2-0 down after 67 minutes to win 3-2.

Shamal George (Carlisle): The former Liverpool striker watched from the bench, as a Carlisle goalkeeper, as his new side beat Cheltenham 3-0.

Sheyi Ojo (Fulham): Didn’t play. To be fair, Fulham did only complete the loan a couple of days before they faced Sheffield Wednesday.

Brooks Lennon (Real Salt Lake): The amalgamation of both Liverpool’s most famous television soap opera and the city’s most successful music artists, Brooks Lennon joined Real Salt Lake on loan in March. Now in the midst of the MLS season, he has just one goal and one assist in 17 league appearances. He played the full 90 minutes against Montreal Impact, ironically not having any himself.

Ashley Smith-Brown (Hearts): Not a single league appearance yet for the 21-year-old left-back.

Bersant Celina (Ipswich): Not a single league appearance yet for the 20-year-old midfielder.

Joe Hart (West Ham): Fronted up while picking the ball out of his net three times.

The last 27 shots on target Joe Hart has faced in the league for Torino and West Ham:

Pablo Mari (NAC Breda): NAC Breda have lost both their first two Eredivisie games by a scoreline of 4-1. That Pablo Mari is one of seven players to have featured for every minute does not reflect well. But at least he made 11 clearances against PSV at the weekend. Every cloud and all that.

Thomas Agyepong (NAC Breda): Thomas Agyepong has been scarcely involved in Breda’s poor start, but was afforded 23 minutes against PSV. And heck, he completed each of his 12 passes. Get Pep on the phone.

Thierry Ambrose (NAC Breda): The last of three City players farmed out to the Eredivisie,

Aleix Garcia (Girona): Are you ready to learn a lot about Girona’s 2-2 draw with Atletico Madrid? We’ll start with Aleix Garcia, who was an unused substitute…

Douglas Luiz (Girona): …then there is Douglas Luiz, the £10.7million summer signing for Manchester City, who was an unused substitute…

Marlos Moreno (Girona): …which brings us to Marlos Moreno, who City signed for £4.75m last summer. As it happens, he was an unused substitute…

Olarenwaju Kayode (Girona): …and so to Olarenwaju Kayode, another summer signing for City, who was a used substitute! He played six bloody minutes! Are you on the phone? If so, hold it! Hold the damn phone!

Pablo Maffeo (Girona): As if that wasn’t enough excitement for a Tuesday morning, Pablo Maffeo played the full 90 minutes in the hard-earned draw. No player made more tackles (3).

Rodney Kongolo (Doncaster): Doncaster have suffered as many defeats in League One as Rodney Kongolo has made starts for them so far this season: Zero.

Uriel Antuna (Groningen): First off, happy 30th birthday for Monday pal. But commiserations for not playing on Saturday.

Chidieberi Nwakali (Sogndal IL): The ‘Nigerian Neymar’ scored the second goal in a 2-0 win over Kristiansund of the Norwegian top flight.

Ernest Agyiri (Valerenga): Valerenga were beaten 2-1 by Lillestrom on Saturday, with Agyiri not even part of the match-day squad. That should teach them the importance of playing Ernest.

2 – @NYCFC's Yangel Herrera’s assist against LA last weekend was just his second in 13 @MLS appearances, and his first since April. Future.

Luka Ilic (Red Star Belgrade): Ilic the elder has played just 14 minutes of football so far this season. He’s only 18, so we’ll let him off.

Ivan Ilic (Red Star Belgrade): In terms of playing time, Ivan is the terrible brother. But he is 16, and is staying on loan in Belgrade for the next two years.

Brandon Barker (Hibernian): Hibs were already losing by the time Brandon Barker was introduced from the bench against Hamilton. He could do little to change the course of the game in a 3-1 defeat.

Isaac Buckley (FC Twente): Twente have rather surprisingly lost their opening two league games. Buckley has played just 15 minutes across both, and didn’t feature at all in the most recent loss to VVV-Venlo.

Regan Poole (Northampton): As Northampton have lost all four of the games they’ve played so far this season, Regan Poole is perhaps rather relieved to have only played in one of them.

Timothy Fosu-Mensah (Crystal Palace): Progress on every front for Timothy Fosu-Mensah, who followed 78 minutes in the 3-0 loss to Huddersfield with the full 90 in a 1-0 defeat to Liverpool. Now just to help them win a game. Or stop losing them, at least.

Fosu-Mensah: “Jose told me to keep focusing on my game. We both came to the agreement that this is the best move for my development.” #mufc pic.twitter.com/AhkVGoQqMc

Dean Henderson (Shrewsbury): After keeping a clean sheet in his first two League One games for Shrewsbury, Dean Henderson must have been pretty content. He could not make it a goalkeeping hat-trick against Rochdale on Saturday, but is still yet to concede from open play; the Dale could only score twice from the penalty spot in a 3-2 Shrewsbury win.

Connor Ogilvie (Gillingham): The one complaint Connor Ogilvie cannot have is one of a lack of playing opportunities; he has not missed a single minute of league action thus far. But that might not be such a good thing, as Gillingham are yet to record a win.

Josh Onomah (Aston Villa): Josh Onomah was one of very, very few Aston Villa players to emerge from their first three winless games with credit. Sometimes life is not fair of course, and the midfielder being subbed off in the first half of the emphatic win over Norwich due to injury proves there is no God. Or at least that God is not a Tottenham fan.