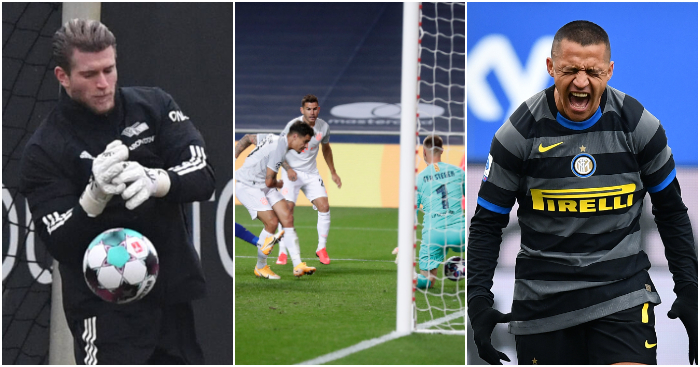 We’ve based this on transfermarkt statistics, though we hold no truck with their market value numbers as they are so very small. But credit is due to them for the raw data and the idea. So this is an XI of players whose value decreased the most during a loan spell. And it was prompted by this one about players whose value increased the most during a loan spell which was itself prompted by the signing of Martin Odegaard on loan by Arsenal. Got all that? Grand.

Goalkeeper: Loris Karius (Liverpool to Besiktas)
Imagine being a kid who loves football and then discovers he’s actually pretty good at it. Soon, it’s clear that kid is not just good but ridiculously good. Miles better than any of his friends or team-mates or opponents. Eventually, that talent and hard work takes him all the way to the professional game and from there to one of the very biggest clubs in the world. There, you eventually get the chance to play in the biggest game of all, the Champions League final. At which point you make a massive bollocks of things and your name and whole career are forever doomed to be a punchline. And then you go to Besiktas on loan and have to terminate your own contract. It’s a cruel world.

Karius is still technically still a Liverpool player and currently back out on loan at Union Berlin, where he has made a grand total of zero Bundesliga appearances. He did get a game in the Pokal, so that must have been nice. Oh, it was a 3-2 home defeat to second-tier Paderborn. Never mind.

Right-back: Victor Moses (Chelsea to Fenerbahce)
We’ve only got as far as right-back and we’re already fudging things. Still, Karius was a good one wasn’t it? Anyway, Moses is not a right-back but during a very odd Chelsea career – one which currently sees him on his sixth loan deal in eight-and-a-half years – did see him become an absolutely integral part of Antonio Conte’s title-winning side on the right side of midfield in a 3-4-3. That’s basically a wing-back, which is only one short hop away from right-back. So that’s fine. That spell under Conte is of course also what sent his transfer value soaring high enough to then fall far enough to get into this list, so it’s all a bit bittersweet. Anyway, he went on an 18-month loan to Fenerbahce that went so badly it was cut short and Moses ended up having to make do with playing for Inter Milan instead because football makes no sense. Spartak Moscow, to save you the Google.

Left-back: Alfonso Pedraza (Villarreal to Real Betis)
The first of several entries on this list that have a big flashing warning light on them with a siren that blares ‘COVID CAVEAT! COVID CAVEAT!’ because the year he spent on loan at Betis coincided with the biggest global crisis in a generation causing player values to plummet all over. Pedraza, who spent half a season at Leeds in 2017, was injured a lot during his time at Betis but still played 21 games. He’s probably a bit unlucky to be here, but we’re just grateful to have a left-back that doesn’t require too much Moses-style skullduggery.

Centre-back: Benedikt Howedes (Schalke to Juventus)
After a decade as a defensive stalwart at Schalke, Howedes went on a very weird loan move to Juventus where he played three games all year. Then ended up at Lokomotiv Moscow for a bit. Then retired. Never dream big, kids. It all ends in tears.

Every time that the Juventus account tweets about Howedes I remember he still actually plays for Juventus, I’d forget otherwise

Centre-back: Matija Nastasic (Manchester City to Schalke)
A dead-heat on the numbers between a pair of Man City success stories, but Matija Nastasic’s six months at Schalke edges out Eliaquim Mangala’s year at Valencia because dropping the same value in half the time is clearly worse and we’ve just this second decided that’s the tiebreaker and frankly there’s very little you can do about it now. Actually ended up joining Schalke at the end of his supposedly disastrous initial six-month stint and is still there 154 games later. Maybe this should have been Mangala, thinking about it.

Midfield: Michael Essien (Chelsea to Real Madrid)
A truly fantastic defensive midfielder who fell out with Andre Villas-Boas and didn’t manage to fully find his way into Roberto Di Matteo’s affections either as Chelsea won that improbable Champions League title in 2012. That August, signed on loan with Real Madrid to be reunited with Jose Mourinho. Promptly referred to each other as “son” and “Daddy” during an awkward introductory press conference which we’re going to go ahead and assume is responsible for the vast majority of transfermarkt’s reduction in his value during that year.

Midfield: Jean Michael Seri (Fulham to Galatasaray)
Perhaps the single most striking example of Fulham’s wacky spending when they got promoted to the Premier League last time, Seri cleared off on loan to Galatasaray when they got relegated with broadly similar success to that which he had enjoyed in England. Now back with Fulham where he has not made a single Premier League or FA Cup matchday squad but did play a full 90 minutes in the 3-0 Carabao defeat to Brentford, so that’s something isn’t it. He is now said to be very close to joining Bordeaux.

Attacking midfield: Philippe Coutinho (Barcelona to Bayern Munich)
Will rightly go down as one of the all-time great pieces of transfer business from Barcelona. Gave Liverpool an unfeasibly fast wad of cash for the Brazilian, which they then promptly used to become the best team in the world, memorably knocking Barcelona out of the Champions League along the way. Barca then loaned him to Bayern Munich, where he scored twice against them to memorably knock them out of the Champions League. He is now back at Barca, who are a billion quid in debt and still haven’t finished paying for him. In more ways than one. Well done, everyone.

Left winger: Yevgen Konoplyanka (Sevilla to Schalke)
Scored one Bundesliga goal in 17 games in 2016/17 at Schalke, who were nevertheless obliged to complete a permanent deal at the end of the season. Things did pick up slightly after that as he scored four goals the following season. Alas, a reversion to the mean saw just one goal the following season before Konoplyanka returned to Ukraine with Shakhtar Donetsk. Current status: injured.

Right winger: Alexis Sanchez (Manchester United to Inter)
The fall and fall of Alexis Sanchez is quite something. After 39 goals in 88 league games for Barcelona and 60 in 122 for Arsenal, he’s managed three in 32 for United and six in 32 for Inter, who he initially joined on loan. So desperate were United to get shot of him and his wages, they eventually let him join Inter for free despite having two years left on his contract. Still not clear who actually got the worse end of that particular deal.

Striker: Mauro Icardi (Inter to PSG)
The end of his Inter career was not a particularly pleasant one, in which he was stripped of the captaincy after comments his wife made about the club, prompting Icardi to refuse to play in a Europa League game. Things were patched up after a fashion for the rest of the season, but when Inter signed Romelu Lukaku, they promptly gave him Icardi’s No. 9 shirt. Off he popped to PSG, where once again, the fall in numbers owes more to a combination of injuries and ‘rona than some on-field disaster. Scored his share of league goals in PSG’s march to that title, and five goals in seven games to help them to the Champions League final, where he remained an unused substitute. Signed permanently for a reported €60m in the summer, but has been restricted to a handful of games this season by a knee injury. Did, though, score and win man-of-the-match honours as PSG won the Trophee des Champions with a 2-1 win over Marseille to hand Mauricio Pochettino his first silverware in management.