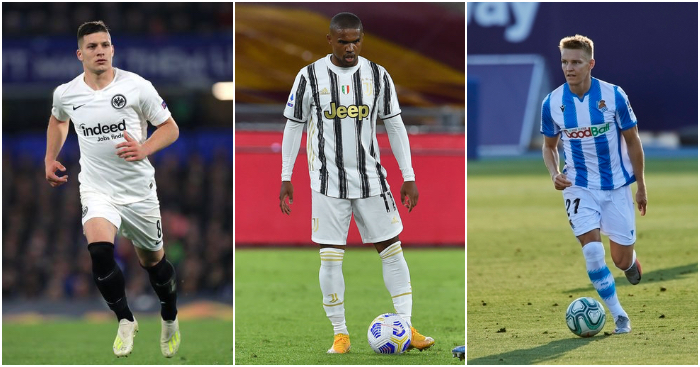 We’ve based this loan transfer value XI thing (working title) on transfermarkt statistics, though we hold no truck with their market value numbers as they are so very small. But credit is due to them for the raw data and the idea. So this is an XI of players whose value increased the most during a loan spell. And it was prompted by the signing of Martin Odegaard on loan by Arsenal.

Goalkeeper: Thibault Courtois (Chelsea to Atletico Madrid)
Three years. Three years he spent on loan from Chelsea to Atletico Madrid, during which he made it very clear that he would quite like to stay in Madrid, thank you. Meanwhile, his value exploded from the £8m Chelsea paid Genk for his services. He then spent four years back at Chelsea – during which he won two Premier League titles – though never seemed particularly settled nor particularly arsed about the club, spending the last 18 months angling for a move back to Madrid. In the end, Chelsea were happy to accept more than treble their initial outlay from Real Madrid, though that paid for less than half the hapless Kepa.

Right-back: Achraf Hakimi (Real Madrid to Borussia Dortmund)
A product of the Real Madrid academy, Hakimi was sent on loan to Dortmund as a little-known 19-year-old thought unlikely to have a long-term future with the Spanish super-club. The next two years saw Hakimi utterly excel in Germany, becoming one of the most-coveted players in the world, wanted not just by Dortmund but by Manchester City and Bayern Munich. Eventually he signed for Inter Milan for £36m, leaving Madrid owing Dortmund a massive debt of gratitude.

Centre-back: Victor Ibanez (Atalanta to Roma)
An extraordinary tale. The 21-year-old Ibanez cost Atalanta just £3.5m from Fluminense in January 2019. One year and just 20 minutes of football for Atalanta later, he was sent on loan to Roma on an 18-month loan deal and became pretty bloody brilliant. By last month he was being linked with a £35m move to Liverpool or Arsenal. So that would just the tenfold increase in the price of a player Atalanta did not even want.

Centre-back: Mattia Caldara (Juventus to Atalanta)
Now here is a man who should never play anywhere but Atalanta. Juventus spent £17m on Caldara in January 2017 and then loaned him back to Atalanta, where he was so brilliant that AC Milan paid £33m for his services in July 2018. He is now back at Atalanta on loan from Milan having never played a Serie A game for the Rossoneri thanks to a series of terrible injuries. So just the £50m spent by two clubs on one player who never played a single league game for either…

Left-back: Pervis Estupiñán (Watford to Osasuna)
History does not record how much Watford ‘paid’ to Udinese for the Ecuadorean in July 2017 but what we do know is that he never kicked a ball for Watford. Indeed, we have no idea if he has ever actually been to Watford. But what we do know is that the last of five loan spells from Watford at Osasuna earned Estupiñán a £15m move to Villarreal last September.

Central midfield: Tanguy Ndombele (Amiens to Lyon)
The wonderful player currently doing wonderful things for Tottenham was once the subject of one of those wonderful loan deals where the club taking the player on loan (in this case, Lyon) sensibly inserted a clause giving them an option to buy for just £7.2m, promising a sell-on fee in return to the smaller club. Both French clubs then made a lovely pile of money when Spurs came along just a year later and offered £55m for the French international, who finally looks like he might be worth somewhere close to that figure.

Central midfield: Bryan Cristante (Benfica to Atalanta)
It was the third of Cristante’s loans back to Italy from Benfica – where he played just a handful of games – at Atalanta that catapulted the midfielder into the Italian national side as well as the attentions of Serie A’s biggest clubs. So Atalanta were more than happy to pay his £8.55m release clause and then send him on loan to Roma the very next day of the 2018 transfer window. A year later, he completed a permanent move to Roma for £19m. They do bloody love a loan in Italy.

Attacking midfield: Douglas Costa (Bayern Munich to Juventus)
Signed by Bayern Munich in a £27m deal in the summer of 2015, the Brazilian flourished under Pep Guardiola but then found his chances limited under Carlo Ancelotti, before upsetting the Bayern big-wigs by openly courting interest from other clubs. A loan to Juventus was brokered and he thrived there, creating 14 Serie A goals in a season which boosted his value and earned him a permanent £36m move. A couple of seasons of excellence later, he found himself far down the pecking order at the Old Lady so has returned on loan to his old stomping ground in Munich. Three Bundesliga starts suggests this loan will not have the same restorative effect.

Attacking midfield: Martin Odegaard (Real Madrid to Real Sociedad)
Yes, the Norwegian has been here before. After low-key loans to Dutch clubs, former wunderkind Odegaard slalomed back into the Spanish eye with a season at Real Sociedad in which he was a revelation. So much so that he was actually named in a La Liga Revelation XI by UEFA. The child prodigy thought in danger of seeing his career disintegrate was so impressive that he was called into the Real first-team squad by Zinedine Zidane, who gave him a grand total of three La Liga starts before shipping him off to Arsenal for another loan.

Striker: Luka Jovic (Benfica to Eintracht Frankfurt)
What a wonderful, wonderful loan deal this was for the German club, who took a 19-year-old unknown Serbian striker on loan from Benfica and watched him score 25 goals in 54 Bundesliga games, meaning it was a no-brainer to trigger the £20m option for a permanent deal. A week later he was sold to Real Madrid for £56.7m. Jovic flopped like a contestant on Splash! in Madrid with just two La Liga goals in 18 months, so Jovic is now back in Frankfurt, where he immediately scored three goals in three substitute appearances. A massive profit and a brilliant striker? Go on then…

Striker: Kylian Mbappe (Monaco to PSG)
It was technically a loan, though PSG were never going to renege on the permanent deal. But that £130m fee looked like a whole lot of money for an 18-year-old when the initial loan move (to avoid FFP punishment) was announced in the summer of 2017. A year later, Mbappe had won the French double and the actual World Cup and that fee now looked like a bargain. The promising young player had now delivered over two seasons and was the real deal. PSG could still make a profit on the striker even as he refuses to sign a new contract as his deal ticks down to 2022. Liverpool still dream of him.