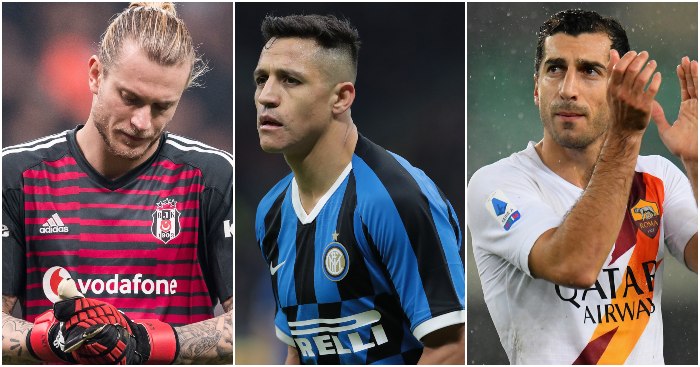 “Alexis will come back in the summer and prove you all wrong.”

Bullsh*t he will, Ole. The Manchester United boss was being a good minion last week when he suggested that the Chilean still has a future at Old Trafford in a desperate attempt to prop up his diminishing value. But anyone with eyes can see Sanchez is finished at United.

Getting shot of him is another matter entirely. United, who are still paying Sanchez around £300,000 a week to play elsewhere, had hoped a try-before-you-buy deal might persuade Inter to take Sanchez off their hands permanently but the Serie A leaders have seen nothing to make them want to invest so heavily in a player on the slippery descent from his magnificent peak.

Injury, suspension and better players have restricted Sanchez to just 190 minutes of Serie A action since joining Inter last August. He has two assists in his last two appearances, but the former Arsenal and Barcelona star will have to single-handedly drag them to the Scudetto and hope the owners are too drunk to realise what they are signing this summer.

Henrikh Mkhitaryan
Sanchez flopping so spectacularly at Old Trafford has taken the heat off Mkhitaryan somewhat, but it shouldn’t be forgotten how poor he was for Arsenal. Unfortunately for the Gunners, it seems the Armenian will be heading back to the Emirates this summer.

Mkhitaryan joined Roma in the final days of the summer window until the end of the season but, like Sanchez, injuries have not helped his cause in Serie A. The 31-year-old has been restricted to just five starts, though the former Manchester United and Borussia Dortmund star has scored four goals and offered another assist in the 541 minutes he’s played.

That reportedly tempted Roma to make a cheeky offer to sign Mkhitaryan permanently, but Arsenal wasted no time in rejecting a bid of around £8.5million. With no sign of a compromise, Mkhitaryan will be reporting back for pre-season at London Colney.

Maybe then Mikel Arteta will judge for himself whether he can salvage anything from Mkhitaryan’s Arsenal career. Perhaps the playmaker will join the other Arsenal players who appear to be loving life under Arteta, even if it is yet to be reflected in their form.

Loris Karius
Calamity Karius is almost certainly heading back to Anfield this summer after a couple of years out of sight and mind, a safe distance away in Turkey. But Besiktas have apparently grown tired of the German keeper too. They have been very patient to last this long, it would seem.

Reports last week suggested the Turkish club were concerned over Karius’s fondness for the Istanbul nightlife and his performances have certainly not warranted looking the other way. Unless it is to find a new goalkeeper as they are said to be making eyes at Aston Villa’s Orjan Nyland.

As it stands, without a dramatic and unexpected change in form and attitude, there is no chance of Besiktas taking up the £9.5million option they have to sign Karius permanently. If Liverpool persuaded the Turks to double the £4.7million investment they made when signing the keeper from Mainz, it would surely rank as their greatest achievement of 2020 – title, Double and Treble all included.

“I know that the player that I am, I have not scored a goal for some time, but with work and humility I will be the same again.”

That was Ramirez’s vow upon joining Real Valladolid on a season-long loan in the summer, a deal which infuriated Everton fans because it wasn’t a more permanent arrangement. But whatever the Spanish striker is doing, it isn’t working. He’s scored one La Liga goal this season, and that was a 90th-minute third in a 3-0 win.

Still, that’s one more league goal than Ramirez has managed in either of the last two full seasons – with Everton or on loan at Sevilla – though it would take the world’s most optimistic chairman to see that as a sign of progress. If Everton couldn’t shift him last summer, it is unlikely to get any easier at the end of this season, unless the 24-year-old suddenly turns into Josef Bican in the coming weeks.

Mario Lemina
The Southampton midfielder made no bones about the fact he wanted to leave St Mary’s last summer. Amid links with Manchester United and Arsenal, the 26-year-old said: “Since last year, I made it clear: I want to leave and go elsewhere this summer… I aspire to play in the very biggest clubs.”

A loan move to Galatasaray was perhaps not what the Gabon international had in mind. Lemina moved to Turkey temporarily, with Galatasaray agreeing a deal which included the option to buy for around £13million. And the wantaway Saint has performed well this term, with Fatih Terim said to be keen on signing him permanently.

Here’s the problem: Galatasaray cannot afford to take up that option. In fact, reports suggest they have around half that amount to spend. Which won’t wash with the Saints.

At least Lemina seems to be putting himself in the shop window while in Turkey, though it seems Southampton will have to find another buyer if they don’t want to take a substantial hit on the £15.4million they paid Juventus in 2017.