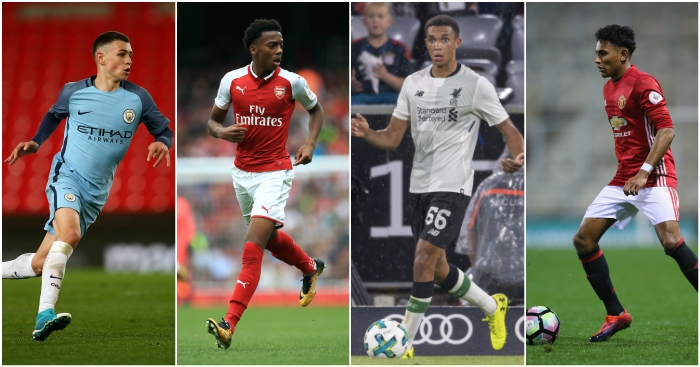 ARSENAL: Joe Willock
Now, White Hart Lane might be closer to Joe Willock’s home in Waltham Forest, but he could walk to the Emirates in an hour or so. Younger brother of Chris, Joe (17) featured heavily in pre-season and was on the bench for the Community Shield. It’s a shame for Reiss Nelson that he was born south of the river so cannot be counted as a local lad even though his family did the right thing and moved to Cockfosters. Sorry, Reiss.

BOURNEMOUTH: Corey Jordan
“He is a really good size, a very good shape and is still growing so I think he has got all the tools,” said Eddie Howe after centre-half Jordan made his EFL Cup debut in September 2016. Unfortunately he then picked up a serious knee injury so the 18-year-old local lad is still waiting for another chance.

BRIGHTON: James Tilley
“We’ve got Lewis Dunk, Christian Walton, Jake Forster-Caskey that have all come through the system. That’s nice for our supporters to see and I hope James is another one that is able to make progress,” said Chris Hughton after the attacking midfielder made his debut (without touching the ball) over two years ago. He’s 19 and he’s from Billingshurst and that’s close enough for us.

BURNLEY: Mark Howarth
Chances are few and far between for young players at Turf Moor so fingers crossed for Burnley-born midfielder Mark Howarth, who has at least been retained for another season.

CHELSEA: Ola Aina
He may have pledged his future to Nigeria but the 20-year-old right-back – currently on loan at Hull – was born about five miles from Stamford Bridge in Southwark. Can he buck the trend and make it at Chelsea as a local boy? Spoiler: Probably not. See below.

CRYSTAL PALACE: Ruben Loftus-Cheek
“I live not too far away, I was born in Lewisham and Palace are a good club,” said Loftus-Cheek after joining Crystal Palace on a season-long loan. It may only be a temporary switch but Palace fans will care not a jot if he makes them better than they looked against Huddersfield.

EVERTON: Jonjoe Kenny
Tom Davies has moved from ‘potential’ into ‘established’ while World Cup winner and Liverpudlian Jonjoe Kenny has only played a handful of minutes for Everton at the age of 20. Ronald Koeman has said he will go out on loan again as he is currently behind Seamus Coleman, Mason Holgate and Cuco Martina at right-back. There is still hope.

HUDDERSFIELD TOWN: Jordan Williams
When you are offered a professional contract on your 17th birthday, you know you must be decent. Town academy manager Steve Weaver said of midfielder Williams (17): “If you show potential and development in your game, you will get the opportunity to progress at Huddersfield Town.” He’s an England U-18 international, he’s bloody good and he’s local.

LEICESTER CITY: Harvey Barnes
Son of Paul Barnes of Burnley and Huddersfield Town ‘fame’, Harvey is a 19-year-old Leicestershire-born midfielder who has joined Barnsley on loan this summer after signing a new Foxes deal. He made his Leicester debut last season as a substitute in the 5-0 Champions League defeat at Porto. Like you do.

LIVERPOOL: Trent Alexander-Arnold
You may have seen him on Tuesday night.

MANCHESTER CITY: Phil Foden
We will hand over to Pep Guardiola: “I don’t have words – I would like to have the right words to describe what I saw. You (the media, fans) are the lucky guys who saw the first game, for the first team for Manchester City, of this guy. It’s a long time since I saw something like this. His performance was another level. He’s 17 years old, he’s a City player, he grew up in the academy, he loves the club, he’s a City fan and for us he’s a gift. He will stay with us training with us in the pre-season and maybe he’ll stay with us in season because he’s special.”

True to his word, Guardiola put the Stockport boy on the bench for the season-opener against Brighton ahead of Samir Nasri.

MANCHESTER UNITED: Demetri Mitchell
Born in Old Trafford and you don’t get any more local than that. He started his youth career with Fletcher Moss Rangers, which has also produced Marcus Rashford and Cameron Borthwick-Jackson. In May he made his debut against Crystal Palace, in July Jose Mourinho said he was one of the “kids to have a future in the club” and this week he scored a stunning free-kick for the Under-23s. Fingers crossed.

NEWCASTLE UNITED: Dan Barlaser
When Besiktas reportedly ask to take you on loan at the age of 20 with just FA Cup appearances under your belt, you can be sure of two things: a) you are pretty good and b) you probably have Turkish ancestry. Both are true but Barlaser is from Gateshead and has switched allegiances to England after appearing for Turkey at youth level. The worrying thing? His mentor is Jonjo Shelvey.

SOUTHAMPTON: Sam McQueen
At 22 he is among the oldest on this list. And after 22 appearances for Southampton you might think he is beyond ‘potential’ stage (especially as he has twice played against Inter Milan) but McQueen is yet to truly establish himself. That he was on the bench ahead of Matt Targett on Saturday is a sign that the local boy may well be impressing Mauricio Pellegrino.

STOKE CITY: Ollie Shenton
“Ollie is someone we have high hopes for,” said Mark Hughes back in 2014. But now it is 2017 and the 19-year-old Blythe Bridge (it’s five miles from the stadium) boy has played just a few seconds of Premier League football and nine minutes in the EFL Cup. It’s not easy being a local lad at Stoke.

SWANSEA CITY: Connor Roberts
A key member of Swansea’s all-conquering Under-23 side last season (really), Roberts is a Neath-born right-back who has joined Middlesbrough (managed by Garry Monk, of course) on a season-loan loan. Swansea do not have a single Welshman in their first-team squad; could Roberts, Daniel James or Keston Davies change that next season?

WATFORD: Dion Pereira
At 18, the Watford-born winger already sounds like a footballer. When he signed his first professional contract this summer, he described it as  “a dream come true”. He has already played twice in the Premier League – a nice reward after joining the club at the age of eight.

WEST HAM UNITED: Reece Burke
“I think we all have to except [sic] that it is extremely unlikely that a teenager will break into a PL team full of seasoned internationals,”said David Gold this summer. So Newham-born Reece Burke is at Bolton and Edmonton-born Reece Oxford is at Borussia Mönchengladbach while a PL team full of seasoned internationals are getting battered 4-0. Burke has at least played 12 times for the Hammers, though his last Premier League start came over two years ago. He is still only 20.

WEST BROM: Sam Field
“They need to get out and learn about the finer arts,” said Tony Pulis last month. And even after Field (19 and from Stourbridge) had started in a 1-0 win over Bournemouth on Saturday, Pulis said: “Those kids need to go out and play proper football. Rekeem, Sam, all of them, there’s a real good group that need to get out and learn.” He then signed the 36-year-old Gareth Barry because Pulis does not seem to believe it is his job to teach them anything.