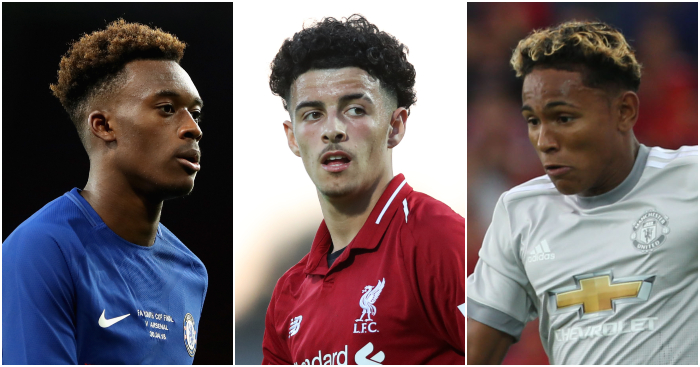 ARSENAL: Joe Willock
Now, White Hart Lane might be closer to Joe Willock’s home in Waltham Forest, but he could walk to the Emirates in an hour or so. Younger brother of Chris and Matty, Joe (19) has played 11 games for the Arsenal first team – largely in the early stages of last season’s Europa League run – but right now is a mainstay of Freddie Ljungberg’s Under-23 side. He grabbed a goal and an assist in last week’s 4-0 win over Liverpool’s Under-23 side. It’s a shame for Reiss Nelson that he was born south of the river so cannot be counted as a local lad even though his family did the right thing and moved to Cockfosters. Sorry, Reiss.

BOURNEMOUTH: Jack Simpson
The 21-year-old Weymouth-born centre-half almost joined Rangers on loan in August but saw the move blocked by Eddie Howe, who perhaps looked into the future and predicted the car crash that was Tyrone Mings in the Carabao Cup this week. Simpson – better than Mings in that game – is currently behind Nathan Ake, Steve Cook and Simon Francis in the queue for Cherries centre-half spots but, having been at the club since the age of eight, he can probably wait another year to make a breakthrough.

BRIGHTON: James Tilley
The problem for any Brighton youngster is that they have signed a gazillion players this summer so even getting in their Under-23 side can be a challenge. James Tilley – 20 and from Billingshurst – had to make do with a bench role this week because Jose Izquierdo was down with the kids. He is a regular scorer at youth-team level so there is hope that he can follow fellow local boy Lewis Dunk into the first team. But the Seagulls may have to get relegated first.

BURNLEY: Mark Howarth
Chances are few and far between for young players at Turf Moor so fingers crossed for Burnley-born midfielder Mark Howarth, who has just returned from six months out with a stress fracture in his back. Rochdale-born Dwight McNeil has at least shown there is a route through to a pretty thin first-team squad.

CARDIFF: Sion Spence
Technically he’s from Barry but he has been in the Cardiff City Academy since the age of seven. Oft compared to Aaron Ramsey within the club, he has basically been adopted (not legally) by Craig Bellamy, who has been charged with bringing through a new generation of Welsh youngsters for the Bluebirds.

CHELSEA: Callum Hudson-Odoi
“I don’t want to forget Callum Hudson-Odoi,” said Chelsea boss Maurizio Sarri as he discussed his wing options earlier this month. But the truth is that the 17-year-old Wandsworth-born forward has been cast aside after featuring heavily in pre-season, culminating in a Community Shield start. He did make the bench for this week’s Carabao Cup clash at least.

CRYSTAL PALACE: Aaron Wan-Bissaka
Arguably already a local hero, Croydon-born Wan-Bissaka has been an absolute revelation at Palace, where he has been on the books since the age of 11. According to the Evening Standard, he first came to the attention of first-team coaches when he made up the numbers in training and played as a full-back against Wilfried Zaha, even though he was a winger. It went quite well.

EVERTON: Jonjoe Kenny
You may argue that Liverpudlian Jonjoe Kenny is already established at Everton, but the 21-year-old is only getting a game at right-back in the absence of Seamus Coleman. Tom Davies is several steps ahead but we cannot claim ‘potential’ on a player who has already captained his club.

FULHAM: Harvey Elliott
His school borders Fulham’s Motspur Park training ground and you really cannot get much more local than that. “He is arrogant in a positive way,” said Fulham boss Slavisa Jokanovic after giving him his debut in the Carabao Cup at the age of just 15 years and 174 days. Elliott is so young that he cannot even get changed with his senior teammates and cannot even discuss a scholarship deal until January (when he will be busy preparing for his GCSE exams).

HUDDERSFIELD TOWN: Ryan Schofield
The 18-year-old goalkeeper has made it as far as the bench for Huddersfield this season – quite the achievement for a player who has been at the club since the age of nine. An England youth international, he has previously been linked with Liverpool and Everton. “Everyone knows that Ryan is a talented young goalkeeper,” said David Wagner last year.

LEICESTER CITY: Harvey Barnes
Son of Paul Barnes of Burnley and Huddersfield Town ‘fame’, Harvey is a 20-year-old Burnley-born but Leicestershire-bred midfielder who has joined West Brom on loan this season after a successful spell with Barnsley. He made his Leicester debut as a substitute in the 5-0 Champions League defeat at Porto. Like you do.

LIVERPOOL: Curtis Jones
England caps discount Trent Alexander-Arnold so we turn instead to a player Jurgen Klopp calls ‘a proper Scouser’. Impressive in pre-season, great things are expected of the 17-year-old midfielder who made an impression on the Reds’ US tour. “I don’t know if I have the right words, but he is not shy to say a few things and probably that’s a surprise for one or two players!” said Klopp. Jones scored in a 5-2 UEFA Youth League win over PSG last week and made the Carabao Cup bench this week.

MANCHESTER CITY: Phil Foden
Simply bloody brilliant. He scored his first goal for Manchester City in the Carabao Cup this week and celebrated like he had grabbed the winner in a World Cup final. Some think Pep Guardiola should play him more but he is 18 and has already played 14 times for one of the biggest clubs in Europe. “Definitely, there is no need to rush,” says Foden. “Pep knows what he is doing, I will play at the right time.”

MANCHESTER UNITED: Demetri Mitchell
Born in Old Trafford and you don’t get any more local than that. He started his youth career with Fletcher Moss Rangers, which has also produced Marcus Rashford and Cameron Borthwick-Jackson. In May 2017 he made his debut against Crystal Palace and two months later Jose Mourinho said he was one of the “kids to have a future in the club”. He is currently on his second loan spell at Hearts, claiming: “I spoke to the manager (Mourinho) and he said going back on loan to Hearts is not a bad thing to get more experience.” He is expected to provide long-term competition for Luke Shaw.

NEWCASTLE UNITED: Sean Longstaff
The son of a Great Britain ice hockey captain and nephew of one-time England football international Alan Thompson, Geordie boy Longstaff certainly has some pedigree. “I spend every day trying to get as close to the level of the first team as possible and show what I have learned,” said Longstaff in the summer. He has since made his debut in the Carabao Cup and made it as far as the bench in the Premier League. “I have had a conversation with Sean Longstaff and told him it’s good for him to stay around,” says Rafa Benitez. There is hope.

SOUTHAMPTON: Ben Rowthorn
You must be doing something right when you are just 19 and you are captaining your club’s Under-23 side. But what are the chances of the central midfielder getting anywhere near Mark Hughes’ first team? Judging by a list of outgoing loan players featuring the likes of Sam McQueen, Harrison Reed, Josh Sims and Jake Hesketh, we would say chances are very slim indeed. Still, good luck Ben.

TOTTENHAM HOTSPUR: Kyle Walker-Peters
You cannot get a whole lot more local to White Hart Lane than Edmonton. And you cannot get a whole lot more potential than being an Under-20 World Cup winner. But the problem for the 21-year-old right-back is that it is difficult to add to your nine first-team appearances when you are behind Kieran Trippier and Serge Aurier in the pecking order.

WATFORD: Lewis Gordon
The reigning Academy Player of the Year is a 17-year-old left-back who was playing as a striker for a team in nearby Harrow when he was scouted by several Premier League clubs, including Arsenal and Chelsea. But Gordon and his family chose Watford at the age of just seven and he was rewarded with a professional contract last year. Could he become the finest graduate of Watford’s Academy since Ashley Young?

WEST HAM: Grady Diangana
The manboy of the hour. The 20-year-old winger might be from Woolwich – so a little closer to Charlton territory than West Ham – but what’s seven miles between friends…especially when fans are desperate for Academy graduates to break through? Diangana made his debut in the Carabao Cup this week, scored twice and looked every inch the potential hometown (ish) hero. He models himself on Ronaldinho, you know.

WOLVES: Morgan Gibbs-White
He’s brilliant, he’s a World Cup winner and he’s from Stafford. He was excellent in the Ruben Neves role this week. His Premier League time will come.