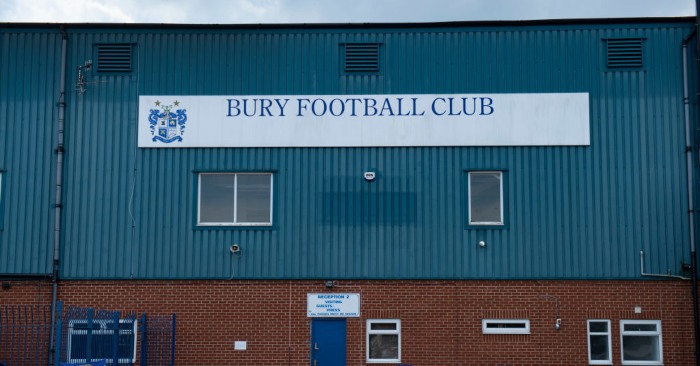 ‘That leave be given to bring in a Bill to establish a regulator for professional football.’

So wrote Labour MP Gerry Sutcliffe back in 1999. You’ll find the failed government bill on some dusty bookshelf while 20 years later, football still has no independent regulator and Bury FC look like they will go to the wall.

Every MP and each member of the football authorities since has failed to protect football clubs and the communities around them from the devastating effects of bastard owners. You could use the phrase bad owners or inept owners but the common denominator of the types that attach themselves to football clubs and run them in to the ground is that they are absolute bastards.

Fan ownership, the obvious answer to ridding football of bastards and poor governance, has been sidelined. Decades have passed in which time English football could have been made the gold standard for governance. It is now the pits, ruining communities.

Back in 1992, the late Brian Lomax was warning football about the dangers of the free market model. He and his friends stepped in to start the first ever supporters’ trust at Northampton Town after the club owner ran up a ruinous debt. Lomax argued, quite sensibly, that fans should be partners in the running of clubs to prevent undesirables from latching on to them for their own ends. From there, supporters should be partners in the running of football organisations.

Lomax went on to help create Supporters Direct via the Labour Party’s 1997 Football Task Force but his simple message on fan ownership has been largely rejected by elites who run a sport played on open fields from closed-off boardrooms. The Germans, of course, were all for the community ownership model and instituted 50+1 fan ownership as early as 1998, not only because they heeded Lomax’s warning from England, but because it made complete sense for club members to have the whip hand rather than fraudsters and land speculators.

Gerry Sutcliffe’s 1999 Bill came to nothing with the Football Association, Premier League and Football League rejecting it, arguing that they ‘do not believe that the overall well-being of the game will be helped by new layers of regulation or bureaucracy’ [ie, a regulator], and dismissed mandatory fan representation on club boards as ‘unacceptable’.

Chance after chance has since been missed to change English football from the collateral damage model that sees clubs as disposable, to one that furnishes the sport with a modicum of protection. Most of the more noble recommendations of the ’97 Task Force have been waylaid.

The 2002 ITV Digital crash came and went leaving various clubs in administration and rocking the lower-league game to its core. The year after, Roman Abramovich acquired Chelsea, starting the game’s infatuation with billionaire foreign owners. The reality for lower-league outfits was more often than not the likes of Munto Finance at Notts County, the nadir of bollocks private club acquisition in 2009.

All the while, fan-owned clubs who try to do things right, with democratic operations and transparency, have been left to fend for themselves, bloodied roach in a river of hungry pike.

FC United of Manchester, formed as a reaction to the debt-laden acquisition of Manchester United by the Glazers, have been rewarded for their ‘making friends not millionaires’ fan-owned philosophy by competing in the financially doped non-league and finding themselves bottom of the Northern Premier League.

Funnily enough, other fan-owned clubs such as Exeter City (run on zero debt) may find themselves well placed to do well out of football’s long-standing dysfunction. The Grecians are joint second in League Two while fellow fan-owned club Newport County are gong well in the same division. Community-owned Wycombe Wanderers are further up the League One ladder in fourth. Proper clubs properly run under significant challenges.

The simple message from these clubs and other fan-owned outfits such as Wimbledon, Wrexham in Wales and Heart of Midlothian in Scotland, is that there are no more fit and proper persons to run a club than its fans. Not only that, with good private owners such as Andy Holt at Accrington increasingly rare, fan ownership could be English football’s only hope.

The fear for the football authorities may well be that if you get rid of all the scum and hangers-on from the lower-league game, you’ll have little left.

It may be too late for Bury.