Home All The News Lonergan to play after kicking from Liverpool fan? 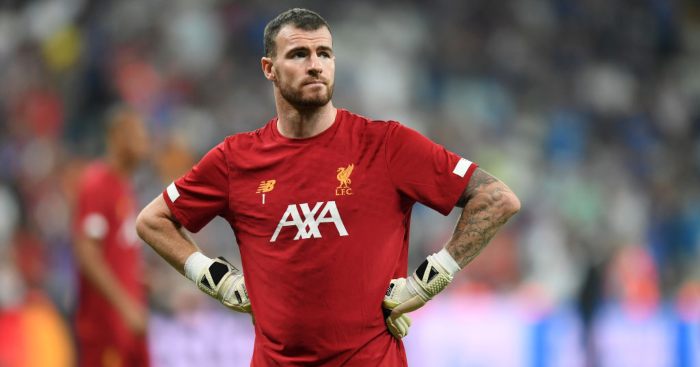 Veteran goalkeeper Andy Lonergan could make his Liverpool debut on Saturday after a fan kicked Adrian on his ankle.

Second-choice stopper Adrian came on to replace Alisson, just days after arriving the club – having been released by West Ham during the summer.

The Spaniard was called upon again in Liverpool’s dramatic UEFA Super Cup penalty shootout victory over Chelsea on Wednesday, saving Tammy Abraham’s spot-kick to win the match for the Reds.

However, Jurgen Klopp revealed that during the celebrations a fan “kicked” Adrian and has given him a swollen ankle ahead of the weekend.

Did anyone see this slide tackle by some idiot after the shoot out… what the heck man!! #LFC #SuperCup pic.twitter.com/hJrGpiguMd

Klopp told reporters: “I don’t understand why in the world of social media when we are all together, a supporter jumped over something and kicked [Adrian’s] ankle. It is swollen but we have to see.

“Apart from that it was a brilliant night for him.”

On whether Lonergan will be ready to play for Liverpool, Klopp added: “We need to think about Saturday to find a way to win the game.

“Andy Lonergan is in training with Kelleher and we have them if we have to make a decision.

“Adrian was a week before, Lonergan has trained with us. Kelleher has potential but is not 100% yet. We will see.”