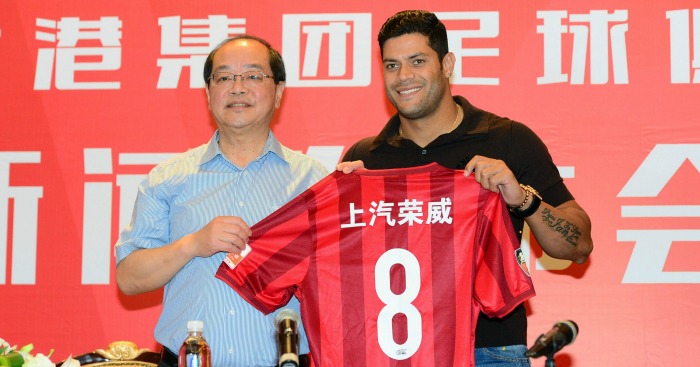 Hulk (not his real name; his real name, Fight Club-style, is Givanildo Vieira de Sousa) seems to be conducting a kind of control experiment for modern football. What, he perhaps wondered, would it look like if I truly made this thing we call a football career about nothing but the money? And not in the half-arsed manner of someone like Oscar, who has always had a faint-hearted look, and no doubt was soothed by his agent that he’d already put his talents to a proper test and could still have some solid years left in him when he’s done in China.

Hulk, by contrast, went for the green in the manner of his namesake. I will die in China. And prior to that, not a single minute in Hulk’s football life, beyond a few of those desultory appearances Russian teams make in the Champions League, and at a push the Europa League-winning campaign of 2010/11 when the best team Porto beat was Sevilla, was spent finding out what he was really, truly made of, beyond money.

And Hulk, if he doesn’t mind me presuming a bit on his behalf, didn’t look like he was too thrilled by it all. If you join a Russian club, you know you won’t be competing in the latter stages of the Champions League. Get to the knock-outs, maybe, but by the time they come around and the European teams are well in the groove, you’re emerging from the Russian winter hibernation of domestic football and often haven’t played a competitive game for months when Marco Reus, Robert Lewandowski and Henrikh Mkhitaryan suddenly explode into view. When that happened in 2014, Hulk and Zenit were 0-2 down and out of the tie within five minutes of kick-off.

Hulk scored in that leg, and banged in one of his standard missiles from 25 yards out in the away leg – the kind that, given that they never contributed to anything meaningful, it’s hard not to now see as circus acts. He appeared somewhat deranged, particularly in the first leg, paroxystic in yelling at teammates, running about, desperate to appear relevant to what was happening, as opposed to being just an incredibly expensive mannequin in a sideshow of a distant city.

It is, of course, not this column’s place to make a judgment on what the other needs of Hulk might be beyond money, or even why particularly he needs that money. Given that he went from Brazil to Japan to Europe, he might just be a personality who needs different and varied places, and being dementedly enriched was something that came later. I’d give a lot to know what is said and what isn’t when a player like Hulk, after his break-out season as a rising star in that Europa League-winning campaign, learns that a move to Zenit St Petersburg could be his reward. Just as I’d love to know how Radamel Falcao, in similar conditions, heard from Jorge Mendes about Monaco. It’s Monaco, mate. The big one.

Never forget this – if the footballer is aware of the vanishingly short lifespan of his career, the agent is doubly aware, given that he doesn’t even have discernible talent to console himself beyond a leech’s opportunism and presumably contacts, for there cannot be any profession so in thrall to contacts as being a football agent. Witness Mino Raiola bringing his clients one by one through the doors of Old Trafford, where previously Jorge Mendes was the king dealer.

But how, I always wonder, do they sell these grim financial moves to footballers? As a choice? Do they sell them obsequiously, like “you, Hulk, you are the only one who can put Russian football on the map”? “You, Oscar, you are what China has been waiting for.” Or is it just a brass-tacks discussion of ‘the smart move’, where all naïve childhood dreams about your football career are discarded, and you are shown a line-graph of your life’s earning power, with the final years just chalk on the carpet?

And is it the smart move? Hulk, you can hardly doubt, will not look back and be happy with the emotions he wrangled from his once-gigantic football talent. He didn’t even do that well with Zenit, for God’s sake – one league and one cup in four years. What he will be able to guarantee is that his grandchildren’s grandchildren will now be safe and sound and well-educated and set up in Brazil or wherever they choose to live, all happy little Hulkinhos because of the choices he made; and that isn’t nothing. We will never know whether they truly were choices, or simply that he or the people around him became consumed by greed.

But for those of us who have never been and will never be footballers, and can only dream, in that way football makes you think of what if, instead of pulling into the car park and wondering if the biscuits you started at your desk yesterday will be a) still there and b) stale by now, your life involved smashing in a long one in the 89th minute in a Champions League semi that hit the post and slammed into the top corner, and the crowd goes up around you with a noise that would probably still be echoing somewhere in your soul at 80 – it’s hard, then, to see trading that possibility for a lorra lorra money as the smart move.