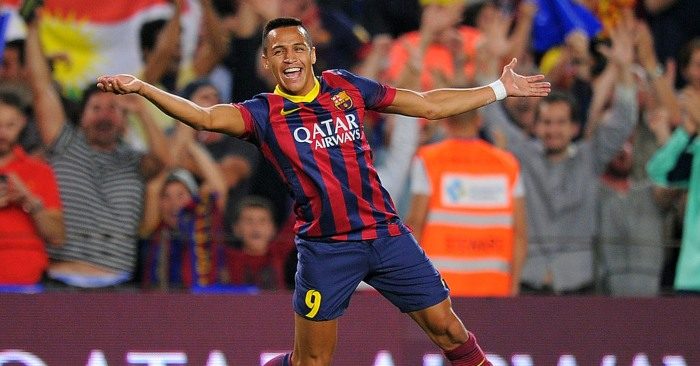 Truly, madly, deeply
Now Alexis Sanchez has left Manchester United – at least temporarily – we can be treated to all of the ‘inside tracks’ on what went wrong for the Chilean at the club, which largely boil down to him being quite an insular character.

Our favourite of the genre came in The Athletic, who paint a picture of an oddball, with the added detail that while Sanchez was nowhere to be found when United were losing last weekend, ‘Maguire is said to have looked devastated by the Palace result’. What a hero. So strong. So brave. So English.

Neil Ashton doubles down on Sanchez in The Sun on Friday, describing a ‘deeply troubled, insular individual’ (because it’s definitely okay to describe somebody you do not know as ‘deeply troubled’) and claiming that ‘nobody could get through to him’.

‘Many felt that he could not cope with the demands of playing for a truly big club.’

Yep. That’ll be it. He scored in both Clasico games against Real Madrid in his first season at Barcelona, was part of the side that won La Liga with 100 points in his second season, and scored 21 goals in all competitions in his third season, but he struggled when joining a ‘truly big club’ who had last won the Premier League title five years before.

‘When he got his move to Barcelona in 2011, he struggled to adapt to the intensity of playing for a world superpower.’

If scoring eight goals in your first 13 La Liga games is ‘struggling to adapt’, then we would love to see somebody getting off to a flyer.

And obviously his Barcelona coach Pep Guardiola was so disappointed with his 47 goals across three seasons that he then tried to sign him for tiny club Manchester City.

And you can tell when he described him in 2016 as “a fighter in spirit, he is a character, he is a winner, he is a class, class player” that he was describing a man ‘who could not cope with the demands of playing for a truly big club’ alongside Jesse Lingard and Scott McTominay.

Pep talk
But what has Pep Guardiola ever achieved, eh? As Jermaine Jenas (who ‘never ducks football’s big talking points’) writes in the Daily Mirror:

‘He is a winner. His City stats are incredible…100-plus points, the goals…yeah we talk about that.

‘But he needs a Champions League to cap it all like Sir Alex Ferguson and Jose Mourinho.’

‘Until it happens essentially Pep’s legacy is the same as Manuel Pellegrini and Roberto Mancini. They all won Premier Leagues at Manchester City. None of them managed to do the big one.’

‘The same as Roberto Mancini’. Because winning two Premier League titles and three domestic trophies – including an unprecedented treble that Ferguson had previously described as ‘impossible’ – while breaking points and goals records is exactly the same as winning one title and one FA Cup in three seasons.

And exactly the same as lovely Manuel Pellegrini’s one Premier League and two League Cups in the same time period.

And a 73% win percentage (v 59% and 60%) is basically shit unless he finally wins the Champions League.

City lickers
Gareth Southgate’s decision not to include Kyle Walker in his England squad has raised eyebrows, but the England coach explained at length that he has a wealth of right-backs and the Manchester City player is “a senior player and he’ll value the rest and recovery as much as anything else”.

John Stones has also been left out because he has missed City’s last two Premier League games through injury.

Add those things together and sieve them through the mind of a Liverpool man and you get Andy Dunn’s column in the Daily Mirror in which he writes that….

‘Stones, Walker and Foden might all feature for the Premier League champions this weekend, but not for England in their upcoming Euro 2020 qualifiers against Bulgaria and Kosovo.’

Well it seems unlikely as only one of that trio has featured in their last two games, with the 19-year-old Foden only playing ten minutes of football this season; it would be utterly bizarre if he were called up by England now. And Stones only returned to training on Wednesday so was not named on Thursday.

‘This latest England squad is an intriguing one.

‘But maybe England chief Gareth knows something that Pep Guardiola does not.’

Well, either that or they are both broadly picking the same available footballers but Kyle Walker is currently having a rest. One or the other.

Feel sorry for Kyle Walker. His omission from the England squad really surprising. Think he’s been in good form and was such a great player at the World Cup. Once you’re out, you’re out imo.

If only there was an example of a former Tottenham right-back being dropped and then recalled by Gareth Southgate.

Anybody? Anybody? We’ve got nothing.

Gonna make you sweat
Neil Ashton, The Sun, August 27: ‘JAMES MADDISON is sweating on an England recall because of his poor performance at the Under-21 European Championships.’

The kids aren’t alright
Neil Ashton’s colleague Paul Jiggins has seized upon this idea that Gareth Southgate was reluctant to promote players from the England Under-21 set-up after their performance this summer, writing blithely about the attitude of these youngsters like only a man sliding into middle age really can.

‘Like most young, loaded Premier League stars, Wan-Bissaka, 21, Mount, 20, and 22-year-old Maddison are not exactly what you would call low on self-esteem.

‘Egos and belief bigger than their trophy cabinets.’

Is that the same Aaron Wan-Bissaka repeatedly described as ‘humble’ by his old Crystal Palace manager Roy Hodgson, and recently by Denis Irwin? And the same Mason Mount described by Frank Lampard and The Sun themselves as ‘humble’ just this week? And the same James Maddison who has worked his way into the Premier League via Coventry, Norwich and even Aberdeen?

But why bother with the facts or the testimonials of those who actually know these young, talented players when you can just dismiss them as ‘cocky kids’. Presumably they don’t know they’re born.

Man City’s fixture list is set for even more disruptionhttps://t.co/neeRoMvDno

And of course you have seen this…

Didn’t realise it was a fake and it was an electrician. Obviously don’t believe everything you read. Lesson learnt pic.twitter.com/9Lx0jeWeFb

Recommended reading of the day
Amy Lawrence on Lucas Torreira (£)