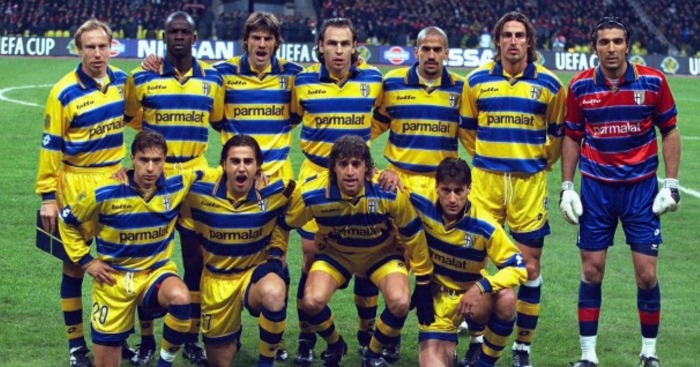 With rumours growing about Tottenham and Monaco both preparing to have their squads raided this summer, we look at seven other teams that were picked apart by the bigger boys. Keep that lunch money in a secret pocket…

Borussia Dortmund – 2011-2016
Nothing quite sums up the financial power of Europe’s super clubs more than the pressure on Dortmund, the Bundesliga’s second most successful club over that period, to sell their key players. Since Nuri Sahin left for Real Madrid in 2011, Shinji Kagawa and Henrikh Mkhitaryan have joined Manchester United, Mario Gotze, Robert Lewandowski and Mats Hummels have joined Bayern Munich and Ilkay Gundogan has joined Manchester City. Then, when Dortmund inevitably struggle, Thomas Tuchel is labelled a fraud. Good ol’ football.

Porto – 2004
A lesson to all clubs, and Monaco take note: If you do well in the Champions League, you will lose your most influential players and manager. No sooner had the final whistle blown in the final than Jose Mourinho was taking off his medal and making it perfectly clear that he was off to Chelsea.

Mourinho took Ricardo Carvalho and Paulo Ferreira with him to London, Deco left for Barcelona, Pedro Mendes joined Spurs and Carlos Alberto and Derlei left for Brazil and Russia respectively. Seven months after being crowned champions of Europe, six of the starting line-up had left. By the end of 2005/06, only veteran Vitor Baia remained.

Shakhtar Donetsk – 2009
It actually took a fair while for Shakhtar’s 2009 UEFA Cup winners to be plundered. The wages on offer, high transfer prices and slightly mysterious nature of the Ukrainian league persuaded plenty of clubs that there was too much risk in signing their band of South Americans. The players in question were also getting regular Champions League football and winning as many domestic trophies as they wanted.

The domino effect was started by Willian’s £30m move to Anzhi in 2012 (and subsequent move to the Premier League), followed by Fernandinho, Henrikh Mkhitaryan, Alex Teixeira, Douglas Costa and Luiz Adriano. In less than four years, Shakhtar had sold five Brazilians and an Armenian for a combined £160m.

Ajax – 1995
Ajax may have lost their way slightly over the last decade, much to the chagrin of the late Johan Cruyff, but their academy continues to produce an astonishing amount of talented footballers. Still, nothing can beat the 1995 team that beat Milan in Vienna’s Ernst-Happel-Stadion to lift the European Cup. Aja managed to stave off the vultures for the first summer, with only Clarence Seedorf leaving for Sampdoria, but in the three years that followed Ronald de Boer, Frank de Boer, Marc Overmars, Patrick Kluivert, Finidi George, Nwankwo Kanu, Edgar Davids, Michael Reiziger and Winston Bogarde all left to find their fortunes. Most hardly regretted their choice.

Parma – 1996-1999
The Parma team that won the 1999 UEFA Cup final might just be the greatest cult club team of the 1990s, but that was virtually the final act of the dream sequence. Financial troubles brought upon a rapid decline that forced an extended period of administration and eventual bankruptcy in 2015.

Anderlecht – The last ten years
Anderlecht are not the only club to have their best players leave almost every year; it is a fate that befalls many clubs in UEFA leagues ranked below the top four or five. Yet nobody quite does it like Anderlecht. Vincent Kompany in 2006; Meme Tchite and Anthony Vanden Borre in 2007; Nicolas Pareja in 2008; Moubarak Boussoufa in 2010; Jan Polak and Romelu Lukaku in 2011; Dieumerci Mbokani and Lucas Biglia in 2013; Cheikhou Kouyate and Massimo Bruno in 2014; Aleksandar Mitrovic, Chancel Mbemba and Luka Milivojevic in 2015; Dennis Praet and Steven Defour in 2016. Ready for Youri Tielemans, Lukasz Teodorczyk and Leander Dedoncker to leave this summer?