Home Mediawatch Look, the first picture of Wan-Bissaka in a Man Utd shirt! 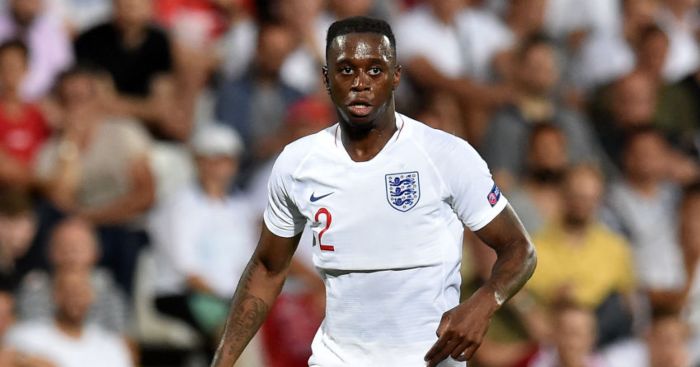 To be Frank
‘Frank Lampard will be appointed Chelsea’s new manager this week…Lampard, 41, will earn less than Sarri’s £5million a year with a deal in the regioin of £4m a season, likely to be for three years’ – Sami Mokbel, Daily Mail back page.

‘Frank Lampard will start work as Chelsea boss next week on a three-year deal worth £5.5million a year – the same as predecessor Maurizio Sarri’ – Andrew Dillon, The Sun back page.

Fan fiction
‘[Lampard] offers an understanding of Chelsea and an ability to connect with its masses which will afford him respect, patience and time from fans who did not grant Maurizio Sarri the same’ – Matt Barlow, Daily Mail.

Curse those dastardly fans who made a point of describing him as a ‘former merchant banker’, constantly referred to his smoking habits and called him ‘wild’ and ‘floundering’ as he won a trophy, finished third behind two phenomenal teams and lost a cup final on penalties in his first season in a new league and a new country with one permanent outfield signing.

If only the ‘fans’ granted Maurizio Sarri ‘respect, patience and time’, eh?

No way, Jose
As the most intriguing of the 15 names on an increasingly long list of potential targets to replace Rafael Benitez, it is no secret that Newcastle supporters will be scouring the internet for an update on Jose Mourinho. Anything would do, but actual quotes from the man himself on the situation is Holy Grail territory.

So when The Coaches’ Voice rather wisely uploaded a YouTube video of the Portuguese discussing his next career move on Tuesday, lips were licked, hands were rubbed with glee and context was abandoned in the perennially desperate race for clicks.

Here is what Mourinho said:

“The only thing that I know is what I don’t want. What I don’t want is crystal clear. What I want – [I know] the general profile of it, of course, but I cannot say clubs and countries.

“I am quite pathological in this sense of I have to play to win. Then if I win or I don’t win, that’s my problem, that’s the players and the club and the structure. But I need a club where the feeling is I play to win. If somebody gives me a wonderful, incredible, amazing 10 years contract and asks me the objective of the team is to stay in the first part of the table, if you finish 7th or 8th or 9th, that’s perfect, that’s not in my nature.”

Now, you might read those quotes and think Mourinho himself is ruling out Newcastle as a possibility. But The Coaches’ Voice refer to the video as ‘our final instalment of our series’ of talks with the manager; these interviews were conducted long before that became a realistic option.

Besides, it would take some considerable extrapolation to use those quotes to suggest Mourinho has made any sort of ‘definitive statement’ over a club he didn’t refer to once. Oh…

‘If the objective of the team is to finish ninth, that’s not for me’: Jose Mourinho all-but rules himself out of Newcastle job as he talks about his next role’ – Daily Mail.

‘Jose Mourinho all but rules out Newcastle job as finishing ‘eighth or ninth is not in my nature’ – The Sun.

‘Next Newcastle manager: Jose Mourinho explains why he would not manage a club like Newcastle United’ – The Independent.

‘Jose Mourinho all-but rules himself out of the Newcastle job: ‘Finishing ninth is not in my nature’ – talkSPORT.

Even Sky Sports, the bastion of reliability with thousands of contacts based everywhere around the world, get in on the act of adding two and two together to get 427.

‘Jose Mourinho distances himself from Newcastle manager’s job’ reads their headline, which is immediately downgraded to an ‘appeared to rule out’ by the first paragraph. Mainly because it is impossible to ‘distance’ yourself from something weeks before it becomes feasible.

Just because one website stripped the quotes completely of context doesn’t mean you all have to follow their lead, guys.

The chosen Wan
That is not the biggest story in all of football at Wednesday lunchtime, mind. You see, Aaron Wan-Bissaka wore a Manchester United shirt when he was a very young child. Stop the f***ing presses.

The Daily Mirror’s initial headline of ‘Once a Red… Wan-Bissaka pictured in a Manchester United shirt as a youngster as he closes in on £55million move to Old Trafford from Crystal Palace’ is not too bad. It’s not news either: simply an article dressed up as a latest transfer update about a player hundreds of thousands of Manchester United fans are searching for on Google right now. But it could be worse.

Indeed, all you have to do is click into that story – top of the Mirror’s website – to be greeted with the following:

Aaron Wan-Bissaka pictured in a Man Utd shirt as he closes in on £55m transferhttps://t.co/Htj4KtHLgm pic.twitter.com/g6Q5acHlVN

It turns out it’s ‘Aaron Wan-Bissaka pictured in a Man Utd shirt’…about 18 years ago.

Steven Gerrard in an Everton shirt, made my night this #onceablue pic.twitter.com/UDVTNSukpq

‘David Silva is on a mission to round off his magnificent Manchester City career with a perfect tenth year.

‘The Spanish midfield maestro, 33, will end his Etihad career at the end of the next season.

‘And he intends to go out by delivering the only major trophy he has yet to get his hands on – the Champions League.

‘Silva has experienced the joy of winning the World Cup and European Championship with Spain as well as four Premier League titles, two FA Cups and four League Cups with City.

‘But he admits his farewell season will see him launch a quest to seize his personal Holy Grail.’

Footballer ‘admits’ that he wants to win Champions League. It must have taken hours of interrogation to coax that out.

Moore to follow
‘Derby are expected to go for a young British coach again as the club begin the search for Frank Lampard’s replacement.

‘Garry Monk is under consideration after his shock sacking by Birmingham, with John Eustace, assistant at Queens Park Rangers, also in the frame. Former Derby defender Darren Moore is another candidate, having done well at West Bromwich’ – Daily Mail.

Recommended reading of the day
Miguel Delaney on Rivaldo.