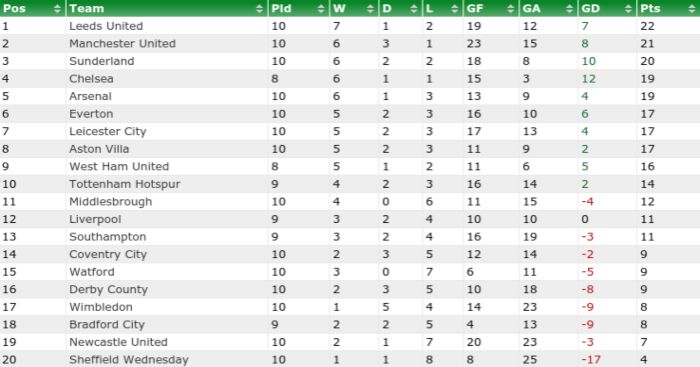 Just for fun, we take a look at the tables from this juncture five, ten, 15 and 20 years ago. Because who doesn’t like looking back and thinking ‘Wasn’t that Bolton side great?’? Thanks to the excellent www.11v11.com for the tables. 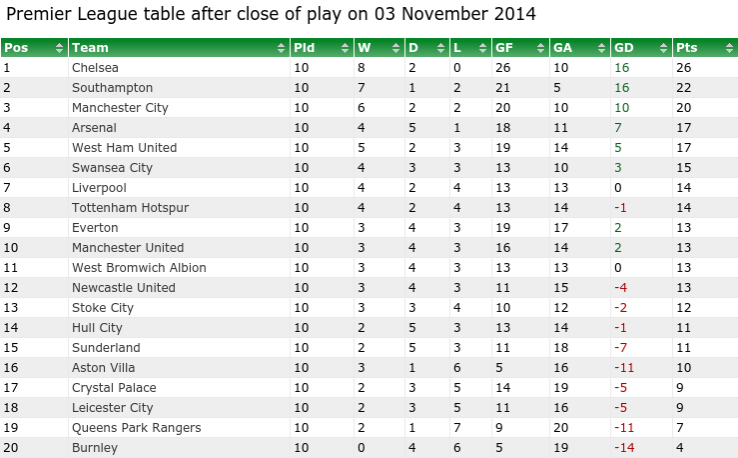 Ronald Koeman’s side, having just recently trounced Sunderland 8-0, had perhaps reached the peak of their rollercoaster. Saints would go on to finish higher the next season (7th to 6th), but a side containing Sadio Mane, Graziano Pelle, Toby Alderweireld, Victor Wanyama, Dusan Tadic, Morgan Schneiderlin and Emmanuel Mayuka was an absolute joy to watch.

Only Chelsea, who remained top of the table at the end of every gameweek, could better them. West Ham and Swansea had their achievements somewhat overshadowed, with the former eventually qualifying for their annual Europa League defeat to Astra Giurgiu, while the Swans would finish just six points behind Liverpool in 8th. Brendan Rodgers’s side would suffer a relatively delayed title race hangover, ending up below both Tottenham and Manchester United at the end of Mauricio Pochettino and Louis van Gaal’s first seasons.

Six of those bottom-half teams would change managers before their miserable campaigns were over. Crystal Palace did so twice, Neil Warnock replacing Tony Pulis two days ahead of their first game, then making way for the appointment of Newcastle’s Alan Pardew in January. Alan Irvine (West Brom), Harry Redknapp (QPR), Paul Lambert (Aston Villa) and Gus Poyet (Sunderland) completed the set, with only Chris Ramsey’s QPR dropping to the Championship. Burnley joined them after rising only one place, while not even Steve Bruce could prevent Hull’s slide. Leicester avoided relegation but wasted it by letting the following season pretty much pass them by. 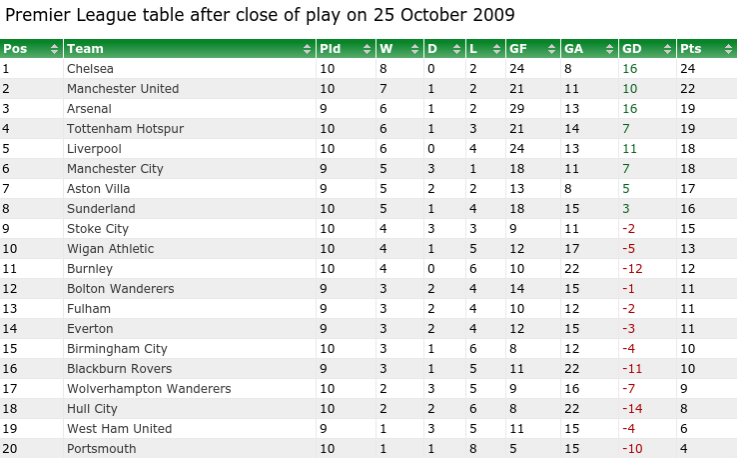 The top four after ten games was the top four after 38, in that precise order and everything. Liverpool, Manchester City and Aston Villa even filled the three following spots between them, albeit in 7th, 5th and 6th respectively. Not even Steve Bruce could prevent Sunderland’s slide to 13th.

Neither Phil Brown-sacking Hull nor Portsmouth, the latter docked nine points in March for entering administration in the same season they beat Rafael Benitez’s fading Liverpool and reached the FA Cup final, were able to turn their fortunes around for long enough come May. A team comfortably in mid-table after ten games would join them: Owen Coyle left midway through Burnley’s first Barclays Premier League campaign and Brian Laws was entirely ill-equipped for the task, winning three of his 18 league games in charge. 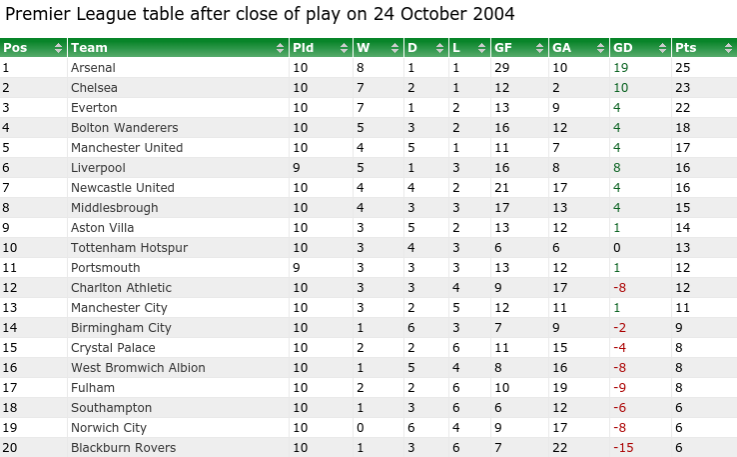 It should never be overlooked just how impressive it was for Jose Mourinho to stroll into the Premier League when Arsenal were so utterly dominant, before wrestling the title away from Arsene Wenger’s side. That unbeaten run was halted on this very day by a Manchester United side still in the process of being rebuilt, languishing below both Everton and Bolton. And neither suffered the usual drop-off that a non-established team endures after a sensational start. The Toffees qualified for the Champions League; Sam Allardyce saw his charges finish level on points with the European champions.

Middlesbrough also maintained their solid pace under Steve McClaren, while fellow England managerial legends Kevin Keegan and Stuart Pearce combined to lift Manchester City into 8th. At the bottom, Norwich were made to wait another four games before their first victory, making their relegation by a single point almost impressive. Southampton dropped with them and would not return for another seven years, while Andy Johnson scoring 21 of Crystal Palace’s 41 goals was surprisingly not conducive to survival. Mark Hughes rescued Blackburn from their Graeme Souness-related misery because he has never been relegated shut up.

Also, just look at those goals scored and conceded columns for Arsenal and Chelsea. If that isn’t *Italian chef kiss* I don’t know what is. 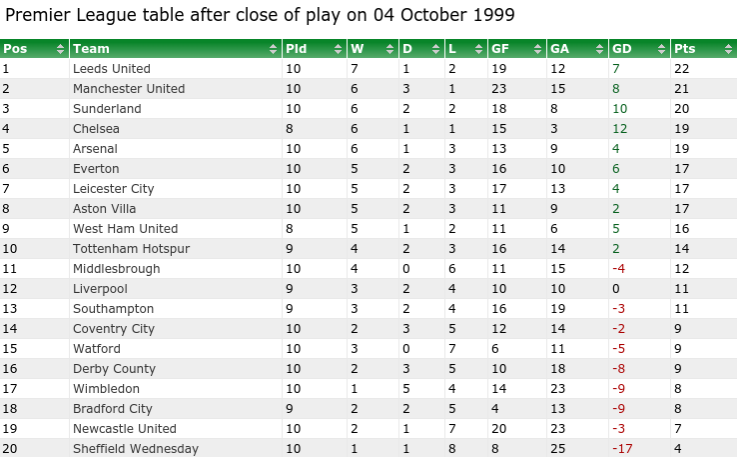 That’s right, kids: they really were good not too long ago. Look at them there, flying high in 2nd, sandwiched by Championship Leeds and League One Sunderland.

David O’Leary’s leaders would enter the new millennium top of the pile but lost their balance by late January as United defended their title by a full 18 points. Arsenal were nominal runners-up, Chelsea wasted those games in hand to finish 5th, and Kevin Phillips F.C came 7th.

That horrible Liverpool start included defeats to Watford, Middlesbrough, Manchester United and Everton as Gerard Houllier experienced belated teething problems in his first full season of sole managerial duties. The Reds finished 4th but that did not become a Champions League place until 2001/02, thus they were UEFA Cup-bound.

Watford won just three more games en-route to the First Division; Sheffield Wednesday and Wimbledon were kind enough to join them. Bradford stayed up by three points after winning three of their last four matches, a run that culminated in the 1-0 home victory over Liverpool on the final day. Newcastle, having sacked Ruud Gullit at the end of August, lost six of their first seven games and drew the other before thrashing Sheffield Wednesday 8-0. Sir Bobby Robson would drag them well clear of the drop and up to 11th. Just imagine what he could have done if he had Matty Longstaff.